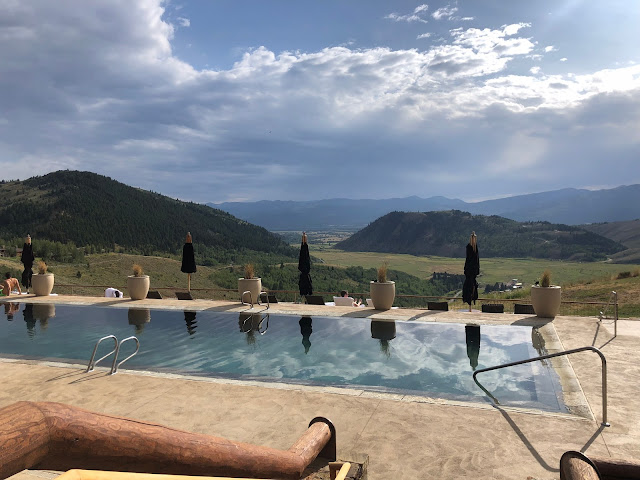 Dateline: Jackson Hole, WY:  Young Jerrence has an epiphany! He now understands why so much of what Matt Lindon writes is almost entirely incomprehensible.  At least to The Unenlightened, the flatlanders.

Those people haven't been rendered and, dare I say, changed forever by the incapacitating magnificence that is The Great West.

Or perhaps it was just the series of interesting bourbon-based drinks that Jerrence and the family kept encountering.

Either way it felt like propitious timing to be provided complete clarity - what with the annual ND Wager looming and all.

I know an Omen when I drink see one. 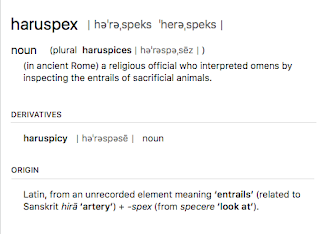 It came upon Jerrence in a dream.  The appearance of a holy man, more native Indian shaman than haruspex.

Which was, in hindsight, appropriate given that Jerrence was in Wyoming.  Otherwise, being visited by some Italian dude would've just been... weird.

The shaman was doing his 'read the entrails of a dead animal' thing as one does in that profession.  All the while Jerrence respectfully wrestled with his patience. How long was this gonna take?  All he wanted was a number.  How many wins, dammit.  Oh, and might you have any hand sanitizer around 'cause I'm not that touching that thing.

But the holy man merely carried on, rooting through the innards of what looked like a dead bird, heeding no mind to Jerrence.

Hey, is... was... that an osprey?  I always wondered what they looked like.

Instead of an answer - a simple 'yes' or 'no' would have sufficed - all Jerrence heard was a stream-of-conscious prattle about Book's improved ability to throw the deep ball, Lea's reliance on a strong pass rush without blitzing, uncertainty in the LB corp, the O-line's across-the-board improved chemistry, freshman sensation Kyle Hamilton's likely early impact in the secondary and could 'Kevin Austin be this year's Dexter'...

Wow. I should probably be paying more attention, Jerrence thought to himself.

The same accusation might've been made of our head football coach as recently as two years ago.  What say ye now, Kelly Haters?

As is the practice in this section, I blatantly steal from a pay site, the exceedingly worth it The Athletic, in the off chance that a) I won't get found out and / or b) they will view my advocacy as a good thing, a small-but-surgical marketing investment.   Call it 'sampling'. This week's Louisville entry: 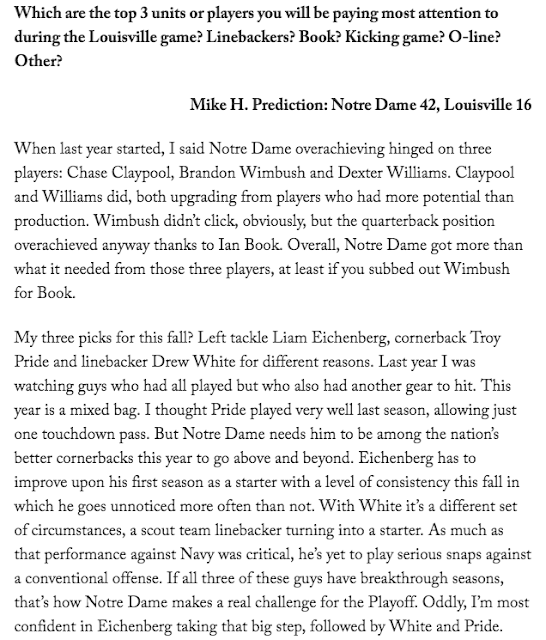 And if that isn't enough - wait, there's more!  The Athletic now offers a podcast (because of course they do) which may be a more efficient way for you, dear reader, of ingesting your ND football fix.  (I mean, how many Audible books can one listen to on your commute?)

Featuring the Athletic's lead ND beat writer Pete Sampson along with Gruley pal, Matt Fortuna (former ND ESPN beat writer), it's safe to say very few are more plugged in than these two guys.  Call it a two-fer for one's subscription.  Check it out.

How many times has Buddy's buddy ever been a woman? Not many.

Ironic, insofar as Buddy was quite the ladies man dog.   Oh to have him as your wingman during one's bachelor days, strolling through Lincoln Park - it would've been like shooting fish in a barrel, even for a socially inept organism like myself...

A quick anecdote, circa 1995:  we're living in Richmond, England and on the weekends, the Corrigan girls (ages 6 and 3) would get their musical education from dad.  A popular album in the household was Squeeze's "Ridiculous" and the rapidfire refrain in one of the the songs was compelling wordplay for at least one of them to mimic.

"Take it the bridge - throw it overboard - see if it can swim -back up to the shore..."

A fun, pleasant ditty, as are most Squeeze songs and I loved those weekend 'sessions' with those little munchkins pogo'ing to whatever was on the kitchen boombox.

But the song is actually about time running out (duh, Jerrence, it's called Hourglass) and we're getting to that age where the sands of time metaphor is playing out more frequently and closer to us than we're surely used to. 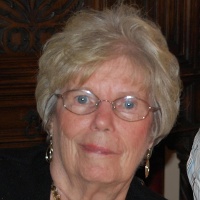 The latter thought occurred to me with the recent passing of Madeleine Castellini,  mother to our beloved Jerome.

I didn't know her especially well but I do know this:  1) she was tougher than anyone reading this blog, with decades dealing with MS and 2) her sense of humor had to be off the charts - after all, she birthed David Howdy and Jerry right off the bat.   Which also probably means she was also a woman of incredible optimism - she had six more children after starting out with those two whiz kids.

At any rate, while her passing was, no doubt, an eventual inevitability - she was 84 after all - the world is little less wonderful today.

So if my concept of Heaven is correct - and I'm pretty sure it is - a healthy Mrs. C was greeted by an irrepressibly goofy alaskan malamute.  Madeleine, meet Buddy.  Buddy, Madeleine.

For those counting (and I am, always)...

Quantifiable evidence that this is, indeed, pretty much The Year of Keanu.

But can it be The Year of the Irish?

We shall see.  Food for Thought:

Tough time of the year for celebrating athletic failure.  Basketball is over - no LeBron or Harden to take glee in their flaming out.  I actually like most of the best golfers these days so that's a non-starter.  And it's too soon to relish anyone choking in baseball lest they pull a '69 Mets and make me look more foolish than I already do.


That just leaves the first week of college football.  Personally I think it's pretty impressive that with so few games having been played last week, I can find one team whose loss brings me happiness.   But that's just the kinda guy I am - finding joy from even the most meaningless of someone else's disappointment.  What can I say, it's a gift.

1.  Miami.   If there was one team that seemed to scream 'over-hyped' - other than Michigan, it would've seemed to be The 'U'.  Honestly, full marks to their Sports Information dept.'s for getting the buzz going.  Too bad you have to even play the games.  so their opening season loss to in-state rival, Florida, came with both good news and bad news:

* Bad news:  10 sacks, as in their O-line gave up 10 sacks. Ouch.
* Good news:  a new turnover chain - woo hoo!
* Bad news:  their QB's rating was 17, which, without understanding the algorithm, I'm guessing is not good.
* Good news:  the rest of their schedule is not exactly Murder's Row so we'll still probably get to enjoy some typical South Beach humility.

Ahh, Greenland.  Tell me Vizini didn't have it correct.  If only that country was mine, I could send all our trolls there.   And I do mean, all of them.

Now THAT would be a Big Idea, a veritable global win-win.

Reminded of the old adage, "character isn't made, it's revealed" it's a new tool-hunting season and while not a long list this week, I offer you an example from two very special genus of cretin: 1) the  ex-Domer-who-never-should-have-been-there-in-the-first-place tool and 2) the institutional tool.

1. Doug Gottlieb .    You all may remember Mr. Gottlieb, a moderately skilled ND basketball player (circa 1995-96) whose tenure at the school was tragically cut short when he discovered that his fellow classmates (or the university administration) weren't down with his assumptive "mi credit card, su credit card" philosophy. 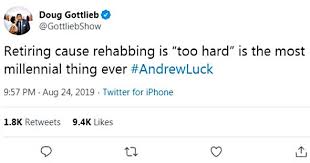 Now a sports talking head on Fox 1, he takes similar liberties with making 'hot take' judgements about other athlete's choices who a) he does not know and b) in sports he does not play.

Sweet.  How do I get a job like that?

In this particular instance, he proffered his 'expert' opinion on Andrew Luck's recent (and admittedly surprising) retirement.  Gee, Doug, how many concussions, torn labrums / cartilages, lacerated kidneys etc. have you endured while getting the sh** beat out of you on a weekly basis - that gives you the basis for such pithy insight? 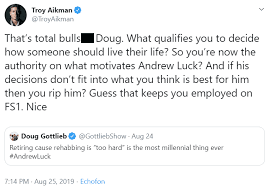 The number of times I've been a fan of anything Dallas Cowboy-related*, I could count on one (severed) hand but right now, I am loving me some Troy Aikman when I saw his response to Dougie's tweet...

...made all the better that they have the same employer.

It would appear that a Columbus, OH-based* college has used that as a business model for handling their legal counsel.

Witness their seemingly serious attempt at legally owning the word 'the' and thereby cornering the market on collegiate pretension. Which, given the Ivy League's monopoly on that is a bold, impressive vision.

Geez, just wait until The 'U' hears about this.

But, of course, this is the same school that re-hired Urban Meyer to teach a leadership course to their business school so one shouldn't be too surprised by their dodgy employment criteria.

*situated conveniently at the intersection of Delicious Blend of Arrogance AND Delusion Blvd. and Dumber Than A Box of Rocks Ave.

Happy Anniversary to the Raymonds!  Wish we could've been there this weekend to celebrate with you!