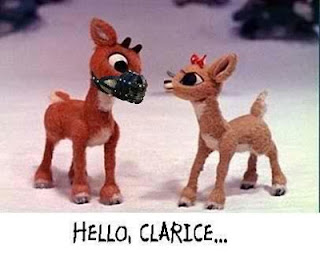 Happy Holidays, one and all! With the end of the regular season and finding myself with even more free time on my hands, I felt the heady exhilaration of being free from you all, if only for a month.

And yet here I am.


So let's start with a song. Not one of your familiar holiday ditties - although anything by Johnny Mathis or Der Bingle totally rules - but one I think you'll all enjoy nonetheless.  From their early age, I weaned my daughters on the musical stylings of The Band - and I'm certain they are better persons for it.  So, too, shall you be...


But back on point.  Why am I here?  Not in an existential, navel-gazing context but more pragmatically why bother engaging when I don't even have to?  Here's why:  I recently picked up Thomas Pynchon's "The Crying of Lot 49" and thinking it to be a treatise on the origins of "A" Lot Tailgating - it is not - I came to discover many things in common between the Glen Cove, NY-born Pynchon's writing and you all.  Starting with the notion that his prose both entertains and confuses... leaves me bemused and convinced his main point went totally over my head.  Which is pretty close to how I'd describe my interactions with most of you.

Then there's the fictional nature of Pynchon's characters. Which is to say, just like many of you. Not real. In the construct of a classic bell curve distribution, for example, I'm fairly confident the Dillon Hall guys actually exist - I simply don't believe my imagination can stretch that far... down.

But I'm equally sure some of you are just the product of a series of poor recreational choices I made during college. Consistently interesting, fundamentally benign, not even remotely real.

Not that there's anything wrong with that.

Which brings us to this football season.  With the benefit of a few weeks distance, and  a couple egg nogs, I wonder if it, too, all really happened.

But who cares!  And the holiday down time has been fodder for a new screenplay I'm developing!  Some of you may recall my summertime efforts in this area ("The Snicker Games"  and "The Boy With The Gerbil Tattoo")... well, sadly, they ended up being non-starters. Viewed as 'legally problematic'.

Legally problematic.  Was does that even mean?!  The legal profession has no appreciation for homage. 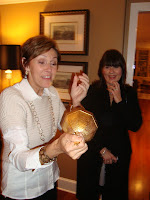 Anyway, the new screenplay is about a ne'er do well, made-it-into-A Small Midwestern Catholic University-by-the-skin-of-his-teeth student who ultimately rises to success, inspires a football team to improbable success, captures the heart of a beautiful, classy woman miles beyond his depth and in doing so, wins the school's highest lay award, Le Grande Explosiv.

The protagonist is a failed performance artist who combines his love of statistical regression analysis with a chance discovery of ambient pygmy music to realize his dream of bringing to Broadway a musical version of The Battle of Stalingrad ("Rooskies!"). His is a story of both personal 'against all odds' triumph and a paean to belief in oneself even as the rest of society treats him like a pariah.

Who to choose?  Everyone's gonna want to helm this bad boy...

1.  Wes Anderson.  Suitably whimsical in tonality; will have to find a role for Bill Murray (The Ghost of Dan Devine?)
2.  Steven Spielberg.  Emotionally manipulative, ensuring Big Box Office and instant award consideration. Perfect for Notre Dame!
3.  Lars Von Trier.  Bat shit crazy; film certain to be condemned by The Church but likely to get me invited to The Venice Film Festival. Will surely affect my future football ticket lottery chances.
4.  Christopher Nolan. Protagonist would inevitably be dimensionalized as a captain of industry, altruistic, heroic... with profound psychological issues dating back to childhood.  But that would mean turning this into a documentary.
5.  Peter Jackson. Pros: shooting in New Zealand (!) and better chance of getting Viggo on board.  Cons:  Lini likely to be re-cast as a hobbit on a quest.  Hmmm.
6.  Quentin Tarantino. Will insist Lini dies in the last 10 minutes of the film, in a hail of bullets while Stealers Wheel plays over the credits.  Worth considering.

The film shot, fittingly, in the surrealist fashion of Jean Cocteau - scored to aforementioned pygmy music.  There will be, for sure, a dream sequence involving young Lini battling Nazi zombies - as a metaphor for the personal doubt he confronts re his bold theatrical vision).

Granted, every film of this ilk takes some creative liberties... and when we come to our hero's successful leadership of Operation: Keg In Stadium, he will be assisted not by his miscreant college friends but by a band of fiercely loyal, cunning pygmies (!) whom a back story will reveal that he befriended on a summer community service mission to the Amazon to evangelize Cincinnati Red Fever - Catch It!

The viewer will inevitably leave the theater having experienced the entire gamut of human emotion:

Inevitably, the movie will end with a Moby song playing over the credits, revealing SEQUEL!  Or prequel, technically speaking,  "Ungie: The Juvie Years".

Look for this Christmas Season 2013, dovetailing with ND's 2nd consecutive national championship and, of course, film-making award season.  I smell Oscars for Day Lewis and Dicaprio.

And gifts that keep on giving...

Looking for a cute little kitchen appliance for that special loved one this Christmas season?

Look no further than James Franklin, head coach at Vanderbilt, who emphatically answered the question, "would you sell your soul to BECOME a small SEC tool?"

That seems, charitably, to be a counter-intuitive action.

But that's what it seems coach Franklin did... tithing to his SEC masters by ranking 3 SEC teams ahead of ND in the final regular season Coaches Poll.  So much for respecting Vandy for being different than the other SEC schools...

If you're in the market for more of a Power Tool, there's always Brett Bielema... who didn't have the stones to even tell his AD he was talking to another school. 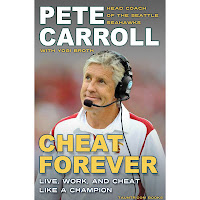 And then there's Le Tool Classique, embodied by Pete Carroll, who two weeks ago, with his team up 51-0 against hapless Phoenix with under 3 minutes left, had his team passing.  And when given the chance a minute later to just take a knee inside the Card's 5 yd. line, instead rushes for the TD.  And just in case you weren't paying attention, this week he faked a punt while up 47-17.

Finally, if you're on a budget, looking for something... simpler... for that special white trash friend, may I interest you in the Tommy Tuberville small appliance tool, named thus after the coach who left a Texas Tech recruiting dinner, never came back and was named the coach of Cincinnati the next day?


Speaking of giving, there's also the matter of the post-season awards ritual.  And I've given it some thought. Here's my special recognition to the 2012 team.

(A couple of the awards might require being familiar with this article)...

“You’re Surrounding Me With Who?” Kindergarten Cop award


Rex Ryan "I Love Fr. Sorin's Feet More Than Is Perhaps Healthy" award
The Jim Kelly “LB or QB” You Made The Right Decision award
You Should Totally Get A Candy Bar Named After You* award

“I Knew Tom Rees. You’re No Tom Rees” (and We Couldn’t Be Happier) award

Brent Musberger Just Shut Up award (Taylor was clearly down, play over)**

* If you only get distribution at the Bookstore, you’ll still make tons of money.
** Even if you don’t say it aloud, we all know you’re thinking it.
*** Besides, you’re this year’s recipient of… 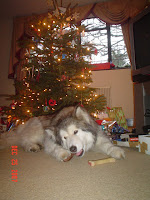 Like all Corrigans, Buddy loved gifts!  The more, the merrier.  That alone makes Manti Teo Buddy-like (or vice versa).  I mean, 7 out of 8 awards he takes home?  If this were Pop Warner, all the parents would be screaming "hey give someone else a chance..."

But of course The Bronze Buddy prioritizes all those things that statistics don't ever capture (especially stats padded against rubbish teams like SMU, La. Tech and Sam Houston St. but I'm not bitter...).

Where was I?  Oh yeah - leadership, inspiration and performance.  No one did it better, on this team or in the nation.  Merry Christmas, Manti.

Don't believe what you read about the pundits being split over the game's outcome. No one really thinks we're gonna win. But that's okay:  a) everyone's entitled to their own opinion and b) that's why they play the games.  We'll see.  Personally, I really like the heavy underdog position (see Oklahoma).  Humbly, I would submit these factors as our keys to the game:

1.  Tackling.  If we tackle like Georgia did, we have no shot.  Now the question is, were the 'Dawgs that bad or 'Bama's runners that strong? Probably a combination of both. In any event, tackling fundamentals have been a strength of ND all season long and it's definitely gonna have to be so on the 7th.

2.  Turnovers.  It'd be nice if our D got a few although if memory serves, I don't think the Tide turns it over very often. No, I'm thinking we have to play an entirely clean game on offense - no fumbles, no INT's, and minimal penalties.

3.  Special teams.  I'm frightened to death that this is going to be a game of steady field position attrition.  And we're gonna lose badly.  Mediocre punting, no return game whatsoever, most of the game taking place on our side of the field.  Holding Alabama to FG's for an entire game would seem nearly impossible.


4.  Play Calling.  We all understand Kelly's strategy in getting ND to this point:  ride a strong and opportunistic defense, run the ball a lot while developing a young QB.  Minimize the downside while taking a few timely, measured risks. 12-0.  Easy. The thing is, you're now going against the country's 800-lb gorilla (or technically, elephant) and it doesn't seem reasonable to me that we can doggedly stay to that formula and win.  Not saying 'throw out the winning formula' but this is a one-game 'for all the marbles'. I hope the coaching staff is contemplating dialing up the creativity (and risk) on both sides of the ball.

About The SEC
Channeling my inner Brandon Marshall (Chicago area readers will understand that reference), I really don't like the SEC. They are arrogant, in-bred and almost certainly packin', making them impossible (and often dangerous) to argue with.  I recently came across the following, probably plagiarized from a Jeff Foxworthy routine but so what.

You Know You're From The SEC If...

A Christmas Word
If you're looking for a nice, out-of-the-ordinary holiday word, may I suggest 'anacreontic'?  It means convivial and it's origin ties to The Anacreontic Club of London - a 19th Century group of wealthy men who liked to celebrate music, food and drink.  The club took its name from Anacreon, a 6th Century B.C. poet who also celebrated, well, celebrating.  Let's hope we're channeling this group on 1/8.


If You Only See One Movie This Holiday Season, Make It... 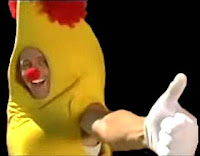 
Only 16 minutes long, it's destined to be the ADD generation's "It's A Wonderful Life".


Final Thought #1
Lest anyone think there's no sense of perspective (or intelligence) in the SEC, you should check out the website Every Day Should Be Saturday.  The Onion has nothing on these guys, they take pot shots at everybody, including their own and ND*, but in my experience it's invariably deserved: 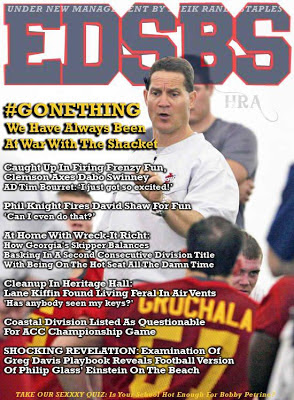 *they loved the Charlie Weis years.