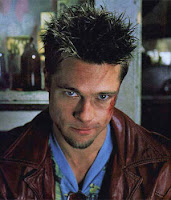 ...you do not talk about Imaginary Girlfriend Club.


I feel compelled to offer some off the cuff reactions to the events of the last couple weeks:

IF everything holds up: Manti Te'o was duped by a guy who had a prior history of “catfishing.” He was completely mortified. He lied to avoid further humiliation and any distractions for Notre Dame en route to the BCS Championship.

That still leaves some holes. Why did Te’o say he met Lennay Kukua at Stanford and tell his father they’d spent time together? Was he was embarrassed about meeting someone online? Quite possibly. I know people who have fudged cyber-setup stories. Didn't Te'o think it was bogus that Lennay canceled/no-showed every time they were supposed to meet? Yup. But I can personally attest to how love can distort the rational thought process. Make you think things are ok. That all the excuses are copacetic -  even though outsiders looking in would scratch their heads. Especially young love. And if Te’o is as devout a Mormon as he so proclaims, and he’s a virgin, the value of the emotional bond might supersede the physical. Who are we to judge?

But ultimately, here's what it comes down to for me. I don’t subscribe to the notion "a lie is a lie is a lie." I really do try to understand the psychology behind it. Manti Te'o had an inspirational story that was embraced by Golden Domers, and lots of non-Notre Dame folks, at a time when the Irish were finally emerging from obscurity. He appreciated the support, especially with the Heisman dangling. Probably even reveled in it a little bit. And you know what? What 21 year-old wouldn't? What 41 year-old wouldn't?

And then, Te’o found out he was flat-out Punk'd. Imagine getting that phone call. “Hi. It’s your dead girlfriend.” The confusion. The anger. The embarrassment of knowing that you, one of college football’s top defensemen, just got sacked. And you were too naïve to see the oncoming blitz.

Te’o consciously chose to continue perpetuating the story line  Don’t get in the way of the team’s run to a national title. Figure out how to handle this mess publicly when we get back from Miami, he probably thought. Does that make him a liar? Yes it does. Does it make him a liar of Lance Armstrong proportions? Did he irreparably hurt anyone? Does it make him a bad kid? In the grand scheme of things, my gut tells me… no.

1.  Jack Swarbrick just fell on the sword for you, Manti.  Time to step up.  (Even your supporters are getting impatient.)

2.  Looking forward to next year, a couple 'A' Lot promotions to anticipate: 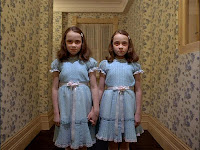 a.  Wear a stylish green lei (and seen in the blog's cover pic) and win a prize!
b.  Bring an imaginary friend and win a prize!  (Feifar has already claimed Danny 'n Tony from The Shining - but the Grady twins are still available...) As is Donnie Darko's Frank. 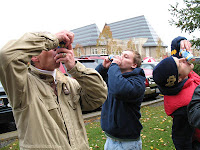 In the meantime, a good man needs your vote...

If you're receiving any solicitations from ND Alumni Association re voting on the next batch of Alumni Board representatives, don't blow it off - one of our classmates is running!  One we like. Check it out on-line here:

Assistant Vice President, FinanceACE Group, Combined InsuranceHawthorn Woods, ILWittgen works in the insurance industry and has held numerous roles in the Notre Dame Club of Lake County, including treasurer of the scholarship committee and leader of professional networking activities with Chicago-area Notre Dame clubs and the Mendoza College of Business. He is a Eucharistic minister and lector at St. Mary of the Annunciation, Fremont Center, and is a member of the Illinois CPA Society.Mission StatementI want to continue and expand my Notre Dame service by serving on the Alumni Board. During my four years in the Notre Dame Club of Lake County, the last two as treasurer, we have held a wide variety of events that have earned us Program of Excellence and Special Citation awards and three Outstanding Club nominations. We have initiated networking events to assist new graduates and our members in transition. We have also partnered with the Chicago-area clubs and the Minority Alumni network for events and activities.My experience working with other clubs in the region has shown me the power and value of shared ideas and programs. As the regional representative, I would encourage and facilitate increased collaboration among clubs. If I have the privilege of serving on the alumni board, I will use my experience to help clubs bring Notre Dame to their communities in new and innovative ways.

We Gotta Have A Song!
Anyone see Morrissey on Letterman last week?  Who knew his music would remain so timely...

For those of you might think this is in poor taste (even by our low standards), consider this:  Alvin pointed out I could've chosen The Smith's "Bigmouth Strikes Again".

Recruiting Irony
And that level of rational behavior might just give one a glimpse into why coaches periodically think the professional ranks might be attractive.

1  deception by artifice or strategem in order to conceal, escape, or evade
2  a deceptive device or stratagem

Finally, for posterity, I must post this again.  Too funny. And, yes, the '13 Game Day signs will be murder...