What comes next?   You've been freed.
Do you know how hard it is to lead?
You're on your own - Awesome!  Wow!
Do you have a clue what happens now...

I mean honestly, who'd a thought we'd score 44 points against anybody?  Even Army. Who, as Defenders Of Our Country, one takes absolutely no pleasure in beating up on. And those uniform colors.  Ugh.  Granted, I'm green/red deficient color blind so who knows what I was seeing vs. the rest of you... but for these eyes, nausea-inducing. 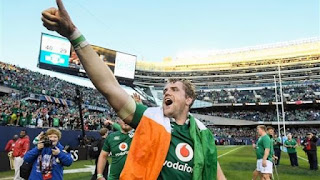 And don't even get me started on Ireland's first ever victory - 111 years, Cubs fans - over the New Zealand All-Blacks.

What's gaelic for "I got your haka right here, Kiwi Boy"?

So yeah, a week for some pretty stunning outcomes.

At any rate, with the weather - and the football season - turning bleaker by the week, I continue to try mightily to practice what I preach, having now started a new regimen of Sports Avoidance, allowing one time to pursue more productive pursuits, to wit:

1.  Literature!  Master Gruley's recommendation of The Art of Fielding,  by Chad Harbach.  A fictional baseball book and 100 pages in, a terrific read.


2.  Cinema!  Instead of watching the game, Jerrence & Lisa saw "Arrival" - a tale of an alien presence that descends on the world, scares the bejesus out of a deeply suspicious populace who, fearing the worst about an agenda they don't fully understand, wish to destroy them.

Spoiler alert!  Ultimately Earth is saved by a woman - a woman! imagine that! - who divines the visitor's actual intent to be one of peaceful facilitation of a more collaborative world.

In other words, not so much metaphor as pure fairy tale.


3.  De-Forestation!  Jerrence & Lisa are nothing if not 'Get With The Program' early adopters of anticipated regime change ... so good-bye Scotchlandia trees - there's a new eco-sheriff in town!

Here's the ironic part (and isn't irony is everywhere these days?):

Our long-time tree guy, Scotchlandia's little topiarian Pol Pot-for-hire, is a fellow named Sayid. So suffice to say, we know he's not long for this country.

Tick tock, Sayid.  Let's get this project over while you're still a viable resource.

So today's moral is: when one takes football out of one's life, productivity and sense of self-worth skyrocket!

Used in a sentence:   In retrospect, Young Jerrence looked upon laying waste to ~ 30 trees not so much as firewood-for-winter prep as a piacular sacrifice to the Gods of The New World Order, both sporting and otherwise, that normalcy might return to his life after a more-interesting-than-was-necessary 2016.

I did watch the game, actually.  On tape delay - allowing the glorious ability to fast forward through all the dull or unpleasant bits.  And with this, the 10th data point, what did we learn?

Nothing we didn't already know: 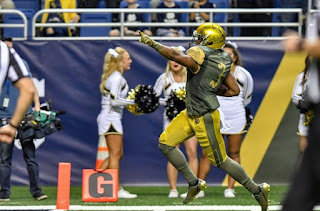 *  We can beat bad teams.
*  We have some good young players that represent building blocks.
*  Kizer is not, yet, NFL 1st round material.
*  Special teams are a 'boom or bust' proposition.
*  Throwing to the TE isn't, in fact, illegal.
*  Everyone was right about Van Gorder, though surely he's a wonderful husband and father.
*  We have some mediocre-at-best coaches that need to be upgraded.
*  We're far, far away from Alabama-level play.
*  But so is everyone else.

No, I'm not super optimistic.

These words they make the world spin here in steady rotation
Until the new words turn the new world into oblivion.
Well at the end of the line and this new world feels pretty rotten.
Then we'll go our separate ways to put new blood into our system.


The other thing that football avoidance allows more time for...

In Scotchlandia, we call that getting back to our roots.

Cocktails.  Films.  Steamers.  Rinse and repeat.  (Ours is but a simple life.)

The Maraschino Candidate
The Manchurian Candidate (1962)
Directed by John Frankenheimer


Not only groundbreaking as the first film to cast black actors for roles in which race was never specified, Manchurian also has Angela Lansbury smooching her son in a performance so cunning, she had to head to Broadway for a few years before anyone in Hollywood would consider her for less sinister roles.

With a wink to co-star Frank Sinatra's famous eyes, one sip of this blue brainwasher and you'll be ensnared in cherry-picked plots you never saw coming.
Combine all the liquid ingredients with ice in a shaker.  Shake well, strain into a highball glass over fresh ice, top with the Maraschino cherry.  Talk about hypnotizing! 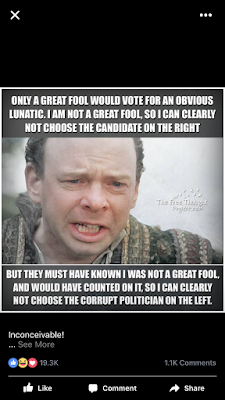 Don't think Kelly is out of the woods yet.  Guys Swarbrick might ultimately think fits the job description:

Thanks to those sending in their wager ante.  So far, I've only heard of three options, with insufficient data points to sway a decision one way or the other, so we'll defer any action until there's further input:
If your name isn't highlighted below, your $25 is still desired:
Young Jerrence
Former Greenskeeper
c/o Scotchlandia
663 Old Suman Rd.
Valparaiso, IN 46383 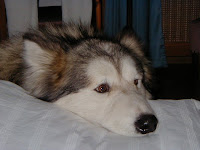 Okay, if for only one single, awesome, common sense-based proclamation, Buddy's Best Bud for 2016 would be Greg Popovich.

But in the spirit of trying to maintain some kind of blog relevance toward football and the ND program, the player everyone seems to be talking about, of late, is Kevin Stepherson.  So let's throw some love his way - nice recovery, Kev, by the way - after almost getting kicked out of school your first week back this semester... 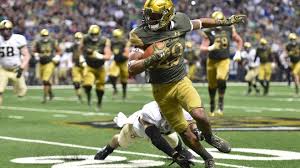 5-75-1 against an undermanned Army defense probably doesn't sound like 'break out' statistics but increasingly, his game-by-game improvement does appear a reasonable basis for thoughts of, ultimately, a Will Fuller 2.0 trajectory.

Let's hope so - cause we're going to need some kind of game breaking production to avoid being embarrassed in these last two games.

Now if we could just identify a Jaylon Smith 2.0 candidate.

Two observations to be made in this regard:

*  There was a lot of phenomenally bad decision-making / time management this week by BCS playoff contending coaches.  A lot.  For all those clamoring for Kelly's head on a pike, does that make them all immediately bad at their jobs?.

*  Any joy in all these alleged top teams going down in flames is tempered by the obvious "what could've been" if ND had played anywhere near its potential  this year.


Let's recount the amount of carnage witnessed within the Top 10 last week:

#2  Clemson.  Loses 43-42 to Pitt, on a last second FG by an unfortunately named kicker, Chris Blewitt.

Special Election-oriented coverage - demonstrating there is such an animal as a Renaissance Troll, a special breed of cretin that can comfortably criss cross industries and subject matters...

America has always been a place where one can proudly be whatever you want to be.  Including, perhaps especially, stupid.


1. Nick Saban.   So the presumed G.O.A.T. college coach declares he wasn't aware of Election Day last week. Seriously?   #1.  I don't believe you and #2.  What did you think you were accomplishing by saying such a thing?

While subsequently backtracking - honesty never being at the top of the list of Saban core competencies - saying he voted absentee, this 'teachable moment' begs the question of what, exactly, is the remit of a college coach these days?

Undeniably, to win (and Nick certainly checks that box). But isn't it also to be some kind of molder of 18-22 yr. old men?

ND may never win a national championship again but I'd like to think that Brian Kelly probably spoke to his team about the significance of exercising one's singular say in a democracy - and the responsibility it carries.

For that I'd rather have Kelly as our coach over Mr. Tunnel Vision any day.  Not that that will ultimately save his job.

2.  Colin Kaepernick.  Then there's the flip side of that coin - a guy (whether you agree with him or not)  who does something undeniably courageous and becomes the catalyst for a powerful non-violent movement.  Takes a TON of grief for it.  And then... consciously abstains from voting?!

Wow.  Colin, you couldn't find anyone / anything on the ballot to voice your opinion on? Not even legalizing weed? Granted, as a part of 110 million who felt equally unmotivated to vote, you're clearly not unique. Still, counter-intuitive to me.   And pretty lame.

Welcome to a new kind of tension...