Dateline:  Chicago, IL.  One of Jerrence's quarterly highlights* is his dinners with Messrs. Gruley and Castellini.

Kinda like intellectual speed dating - except without any evidence of actual intellect - the breadth and depth of the subject matter covered during these wine-soaked affairs is often dizzying, though truth be told, given the quality of the wines that Lini typically brings, it's often difficult to identify the source of disorientation.

Regardless, the banter is decidedly not for those requiring linear, logic-based transitions in topics.

Stated differently, if one is baffled by the lack of connective tissue in this blog, it's safe to say your garden variety Engineering or Accounting major wouldn't make it past the appetizer stage of these dinners before curling into the fetal position asking for their mommy to "make it stop make it stop".

And so it was this week that a discourse which started with ND football... quickly progressed to movies, to the lyrics-meets-music alchemy involved in great songwriting, through raunchy, albeit skillfully acted Seal seal jokes - moving, ultimately, onto the very nature and origins of Creativity itself.  So when Castellini opined that All Great Creativity tops out by one's late 20's or best case, mid 30's... Jerrence cast a furtive glance at 62 year old Gruley's way.

Um, Bryan.  About that full-time novelist pursuit you fancied, post-40 year journalism career.  Just how committed to it are you, I mean, you know... at your age?

Because while there are always Exceptions To Every Rule, the clear implication here was that, well, Bry, you aren't it.

I assume this includes you too, Jerry Perez.

Had Jerrence been either quicker witted, or less focused on getting his share of the yummy Wedge salad Mr. Gruley had recommended for the group, he would've said, "Buck up, Bryan! The composer Richard Wagner hadn't finished his monumental Ring Cycle until he was 60!"


The tragedy of the warrior-maiden Brünnhilde, her beloved hero Siegfried, where all the gods brings nothing less than the end of the one world / beginning of a new one, and the ultimate triumph of Love over Evil.

In the entire operatic repertoire, one simply doesn't find a greater musical or dramatic grandeur, or more staggeringly intense emotions, than his Twilight of the Gods.

And if it had been set in Michigan and the hero had a failed hockey career, it would've been pure Gruley.

So there is hope, even for us 60+ year old writers... 40 years past our creative peak... and one need look no further than our coach Kelly, who, on the eve of this year's USC game, seems to have similarly hit his stride where ND is consistently top 10 (arguably top 5) with a young, creative coaching staff and a strong recruiting pipeline.

* probably saying more about the blogger's pedestrian social calendar than the actual quality of the company. 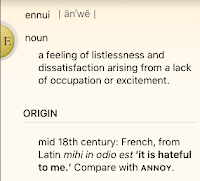 Almost immediately, Jerrence recognized he was in unfamiliar territory.  As he settled in on his comfy couch, with a Yuengling lager and nachos, safely within arm's reach, he saw that Notre Dame's opponent, Bowling Green, was bad. Really bad.

And moreover - and here's where it got weird - ND wasn't going to play down to Bowling Green's level.  Quite opposite, in fact.

And as the score differential grew wider...  21-0 after the 1st quarter, 35-0 by halftime, Jerrence kept waiting for the exultation that comes with a blow out.  But that was not what overcame him.  Instead, he felt sympathy for the Bowling Green players - they were trying hard - even as his mind wandered (I should probably be doing yard work) he realized he was feeling that most French of emotions, ennui.  It was like already knowing the ending of a movie.  A not very interesting one.  Three hours of his life Jerrence would never get back.

Ennui. Blending boredom with a dollop of depression, what a pathetic concept.  Who even thinks up such a word?  Probably some pretentious existential philosopher.

Yet another reason to hate the French. 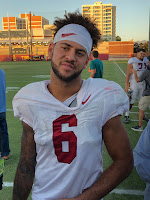 "It will be fun when we're running up the score..."

Yes, Mike, you're a stud receiver and no doubt a certain high draft choice next April.  But 'running up the score'?  SC has scored over 40 pts. exactly twice since 2017.   I'm guessing you're not a history major.


Taken out of context or not, hello, Notre Dame bulletin board.

I'm so happy because today
I found my friends
...They're in my head.

1.  "You had one job..."   Basically don't get anyone hurt.  Despite the scare of big Myron going down, temporarily, on the first play... it would seem mission accomplished.

3.   Showing just how dull the game was, I'm forced to bring up... Doug Flutie. Probably not a popular opinion I think he's been pretty good all year long, especially analytically re Book.

4.  So we've determined that our O-line can dominate.  When they have a 45 lb.-per-person weight advantage.   good to know.

5.  Hey, Bo Bauer!  Despite looking like a guy who does Civil War battle reenactments in his free time, he's quite the special teams stud!

6. I hope this game proves to be a cautionary tale for Clark Lea about the perils of taking the first head coaching offer that comes his way.  Bowling Green was bad - and is very likely going to be bad for several years.  Will the BG administration stay patient?  I wouldn't bet on it.

7. And a Phil Jurkovec sighting - huzzah!  And he looked good.

This week's Mailbag Q&A plundered from The Athletic, looks ahead to Saturday night: 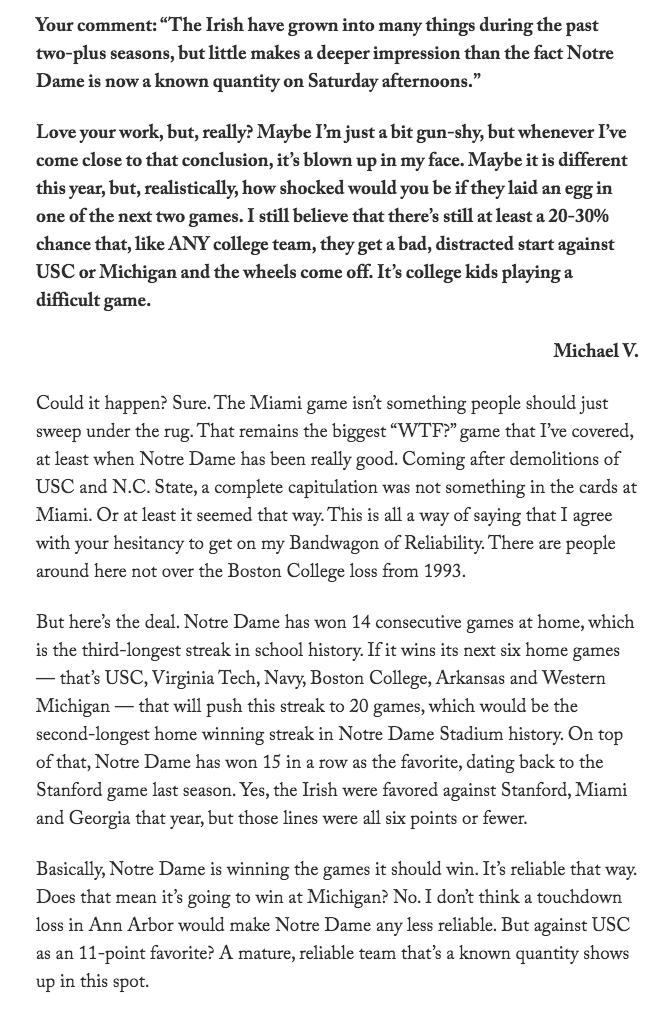 1.  There's no one from the game that earned Buddy recognition.  Sorry but excelling against the JV squad doesn't quite cut it, Ian. But nice to see you look really good, nonetheless.

2.  I'm not a proponent of underage drinking, as hypocritical of a stance as that might be, given my own history.  But I do allow for cultural exceptions - growing up in Italian, German or Irish families, I understand the grape or the grain might be considered just another food group.


So when I received this picture of James Patrick Flaherty, Jr., I was more than a little bit conflicted.  Hey, I've read the stories about Robert Downey Jr.'s early introduction to substance abuse - wait, he's now well on his way to billionaire status with every Avenger movie he gets a percentage of... hmmm. Perhaps alternative parenting methods shouldn't be immediately discounted.

Thanks to Our Man Behrens (Bloody Mary savant and part-time bible scholar), who while caveating that present day Child Social Services might embrace a more limited interpretation, pointed out, "I don’t believe Jesus intended the fruits of his first public miracle to have limited distribution or age restrictions..."

Amen, brother.  Besides, it's probably a moot point: it doesn't look like our newborn friend is giving up that glass anytime soon.

I live my life,
I live it slowly...
...Just a newborn friend for the world.

Here's an interesting bit of synchronicity.

Bowling Green, KY - founded by the pioneers in 1798, was a thriving agriculturally-driven community when a young British girl, Mary Ann Evans (see below), visited a beloved distant relative for an idyllic summer spent in the area's sylvan dells.

And yet, so taken aback by the draconian state of organized Methodist religion in town, the young girl returned to Blighty significantly less naive, with fresh perspective on her own country's dysfunctional infrastructure - leading to the classic piece of literature described below.

Of course, not a shred of that is actually true but it'd be handy for this writer if it was. This is what you get when one's ennui-riddled mind wanders while waiting for Godot Phil Jurkovec to see the playing field. 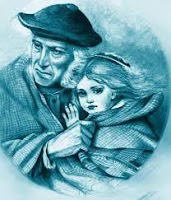 Dude writes like a lady! Penned under the name Bryan Gruley "George Eliot," Mary Ann Evan's Silas Marner is the tale of a man wronged by his church - closely mirroring the author's own disenchantment with religion.

It's only after Marner loses his gold fortune (only after he's forced to leave town under false accusations of stealing from his congregation's coffers) that he discovers his true idea of wealth: becoming a father.

Hailed as a clever critique of organized worship and industrialized England, Silas Marner inspires a drink that's a little bitter and a little gold-flecked - sort of like a man's own life. 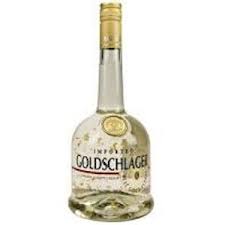 Combine the Goldschläger and Grand Marnier over ice in a highball glass.

Fill to the top with the ginger ale and add bitters.

Get ready for the next best thing to holy water.

As if the boredom of the game wasn't enough of a psychological challenge this past week, competitive outcomes proved to be another.

Which is to say, not enough of the right teams lost, including looking at the baseball playoffs.


1.  Auburn.   Other than stating the obvious (we need the teams ranked above us to lose) there is also the benefit of it being an Alabama team losing.  And an SEC team.  Of course, the fact that the winner was another SEC team ('all our teams are so awesome') is a bit of a buzzkill but hey, let's celebrate small victories. 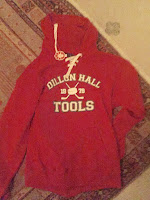 What was the old Wide World of Sports expression?  "Spanning the globe." This week we've got:

1.  Fair Pay To Play Act.   To be clear, I'm not opposed to athletes getting compensated beyond their scholarships thought can we please recognize that that benefit should be considered significant.

And let's acknowledge that the NCAA might be the most poorly run institution in the country. Revolution, not evolution, figures to be the only way forward.

But I don't see how this law(s) doesn't end up being a godsend for the SEC bagman - or anyone's booster - to abuse the living sh** out the law.  I fear for ND here.


2.  Vontaze Burfict.  Can the NFL just kick him out of the league now?  After Burfict went head-hunting (literally) against the Colts TE while the guy was on his knees he's now been suspended or fined 15 times in his career. And you think he's going to reform?

And NFLPA, defending this guy - really?  You're embarrassing yourself. 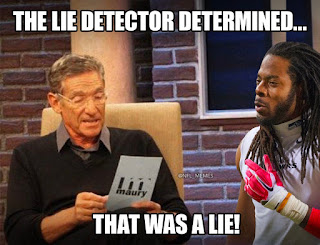 3.  Richard Sherman.  A much of a colossal douche as I believe Baker Mayfield to be, Sherman's allowing the former Oklahoma QB to play the victim this past week was extremely disappointing.  For those not following the NFL, Sherman accused Mayfield of being unprofessional in not shaking his hand before their Monday night game.

Except that they did shake hands - and it was caught on tape.


Note to the Stanford alum:  there's a camera on you ALL THE FREAKING TIME.  That said, how do not remember a handshake two days earlier?  Uh oh, CTE alert!

Baker was remarkably professional about the whole thing so maybe there's hope for us all that maturity can come at any time.  Though I wouldn't hold your breath, Dillonites.

4. La Famiglia Dillinger.   I enjoy a good conspiracy theory as much as the next man - you'll never convince me that Oswald shot Kennedy with that dimestore rifle he had - but the descendents of John Dillinger are now insisting "the FBI shot the wrong man!"... huh?

Unless it's going to show he's sucking down Mai Tai's with Amelia Earhart on the Mariana Islands - which would be AWESOME - I fail to see the point.

One can only hope Geraldo Rivera is leading the coverage. 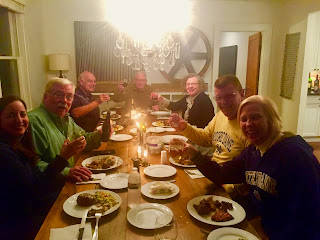 Looking forward to this weekend w the Union Pier gang!

But we're never gonna survive
Unless we get a little crazy...