Week 3 (2013): And Now For Something Completely Different

Okay, maybe not so much.  Another game, another disappointment.  I thought we were past this.  Evidently not.

But speaking of things we are past... my life as an itinerant marketing consultant.  Which is to say, for those who didn't know, since the start of July,  I'm no longer occupationally unencumbered (sans job).

Huzzah!  And the Corrigan girls rejoice - no more prospects of thin gruel for their Christmas porridge!

Of course, with the good comes the bad.  Now that I have somewhere to go every single day and apply my energies, certain projects have to be suspended:
1. "Tommy".  A rock opera for the new millenium.  Deaf, dumb and blind QB becomes a modern day messiah for small backward, mildly inbred group of religious radicals in SE Pennsylvania. (Think Book of Morman Meets Amish Mafia.)  A clear Tom Cruise vehicle. Or Pauly Shore.

2. "Infectious Diseases In Cattle".  An admittedly derivative book of children's sonnets using sickly-but-cheery livestock as "the sun will come up tomorrow!" metaphor.  Probably a non-starter anyway, due to my inability to find a word that rhymes with Jakob-Creutzfeldt. And identify anyone willing to illustrate it.

3. "Pussy Riot:  The Balaclava Strikes Back." A coffee table book featuring the kookie russian punk rockin'-feminist-masked avengers as style icons leveraging both their unlistenable music (cd included!) and their love of primary colors and cheap acrylic, with fashion tips for what to wear when toppling an authoritarian government.   The perfect Christmas gift for that certain 'tough to buy for' someone.  Perhaps in '14.


At any rate, thanks to all for your support during a pretty odd, frustrating time for me.

What's that got to do with ND football?  Well beyond the fact that I bet the Pussy Riot chicks can tackle better than our DB's and I KNOW they'd never get knocked on their butts by a little RB not carrying an AK-47 (I'm talking to you, Matthias), not much.

But such is the mental state of watching this team after three games:  mixed up, disappointed and looking for answers in the most unlikely of places.  Like the Kremlin.

SONG OF THE WEEK

Thanks, first of all, to everyone who shared their Top 10 albums lists.  I never realized there were so many Tony Orlando & Dawn fans out there.  But growing up in the tumultuous 70's affected us all differently I suppose.  One band that I'd personally throw into the under-rated camp would be Creedence and the poignant "Someday Never Comes" seems to describe my attitude towards our football program.

"Papa, why does every QB we play against look like a Heisman candidate, even when it's the guy's first start since his Pop Warner days? Why does Tommy throw it 90mph when his receiver is 8 yds away from him? Why do we play the slow white guy at (pick your position here)?"

First thing I remember was askin' papa, "why?"
For there were many things I didn't know.
And daddy always smiled; took me by the hand,
Sayin', "Someday you'll understand."
Well, I'm here to tell you now, each and ev'ry mother's son.
You better learn it fast; you better learn it young,
'Cause someday never comes.

Used in a sentence:  The ND team showed such a frustratingly pococurante effort for 3/4 of the game that young Terry was forced to turn his attention in a different direction. And by 'different' he meant 'single malt.'

Pre Game
Watching ESPN Game Day in the a.m. and...

Treat #1:  A nattily attired Lyle Lovett is the guest game picker!
Treat #2:  His presence forces Desmond Howard off the dais.  A win-win!
Treat #3:  Lyle totally knows what he's talking about, making savvy and insightful observations on half a dozen games.  And in the process, thoroughly bewilders Lee Corso.   Not that that is such a remarkable achievement.

Lyle, you've long been The Most Interesting Thing About Texas.

Combine the first three ingredients in a highball glass with ice.  Drink. Scan idly through Osteen's book during the TV timeouts.

"Anyone can create by faith and words the dreams he desires, " the book unabashedly promises.  "Health, wealth, happiness, success! Even the perfect red zone play calling strategy!"

Wait a minute.  This doesn't sound like stuff that Jesus would say.

Keep reading through the book - it's halftime anyway.  Get to the part about how you have a "Miracle in your mouth". Throw back another cocktail.  "Why yes I do!"

Then keep reading, if you dare.  But keep that Captain Morgan handy.  You're going to need it.

Last week, tough. This week, easy.  Davaris Daniels is gonna be a star, not that the rest of the world may necessarily know it this year.

This was one week where the stats weren't deceiving:  8 catches, 167 yds. and 2 TD's.  And for all the commentator's chatter about Purdue daring ND to go deep, it's a mystery (to me) why it took us so long to do so.

Nonetheless, the clear Star / Savior of the game.

SCHADENFREUDE
Another  easy week to find joy in other's misfortune.

1.  Texas A&M   Not the beat down I was kinda hoping for but a loss is a loss. And with coach Sumlin (and Johnny Football) likely off to the NFL next year
2.  Texas. Talk about hitting rock bottom. 27 unanswered 2nd half points against a team that's 10 years removed from starting a Manning at QB.  In a complete downward spiral, I can't look away.
3.  Wisconsin.    Old habits die hard.  Your complete-tool-of-a-coach left for Arkansas (good riddance to bad rubbish) but you were still ranked higher than us.  So I must celebrate your misfortune.  Not that it makes me feel any better about the ASU game in Dallas in a few weeks.
4.  USC.  Hey SC fans, welcome to our world (circa the Davie-Willingham-Weis years)!  You hate your coach, know he's a total fraud, yet every time you win, you lose - as he becomes possibly, just maybe, that less fire-able!  Enjoy a year of twisting in the wind.

1.  Johnny M.   As my brother Mike so aptly put it, you're the Lindsey Lohan of college football. So talented and such a colossal train wreck.  I loved this gem from Saturday's telecast, "My motto is live hard, play hard."   Wow, that's original.

2.  Pete Carroll.  Whining to the refs, that's nothing new for The Poodle.  But last night's attempt to lobby the refs about some fan - with clear malevolent intent - blowing a whistle from the stands to confuse his lads (and leading to a 49'er punt block) was unique inasmuch as the Seahawks were playing at home.   Good one, Pete. 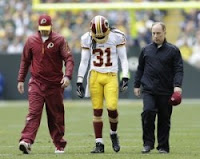 3.  Brandon Merriwaether.  He was a thug at 'The U' and after a couple NFL stops is now a thug for the Redskins.  That doesn't make him particularly special.  But this kinda does:  Sunday he goes helmet-to-helmet with Eddie Lacy and gives him a concussion, knocking him out for the game (and probably longer). That worked out nicely.  So he does it again to another Packers RB - and this time gives himself a concussion.   I hate it when that happens. 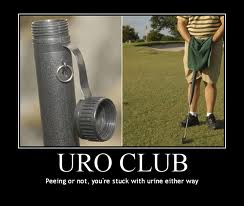 "There are no menial jobs. Only menial attitudes."

William Bennett,
who apparently never envisioned
anyone having to do telemarketing for
The UroClub, "the golf club you can pee in." 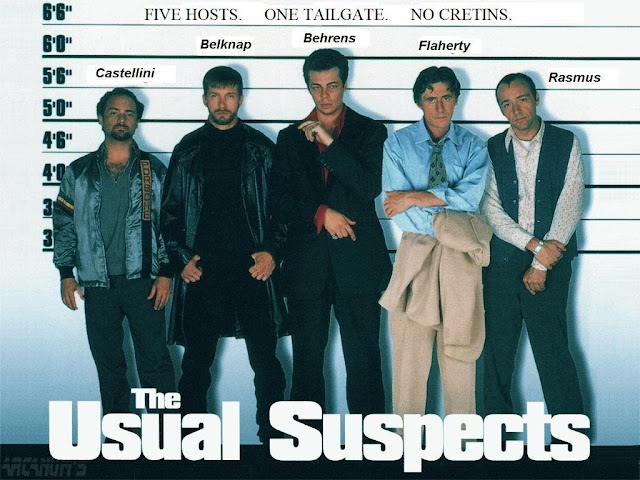 Did you know that sometime in the early 1950’s, Frank Sinatra made his first visit to Twin Anchors? Over the decades, he continued to make Twin Anchors one of his favorite stops.  The tales abound. Frank’s order was always ‘Ribs, and keep ‘em coming!’

Today, Twin Anchors is frequented by young and old, regular, 'normal' folk as well as the odd and the famous, including reclusive author, raconteur and mixologist Peter Behrens who is known to bring his entourage of miscreants into the restaurant every August when they lay siege to the town for a long weekend of Cubs and alcohol. Not necessarily in that order.

Operators are standing by to take your call.