As many of you know, driving west to Iowa often results in some of my greatest, most insightful epiphanies.  Perhaps it was the music that Shea loaded me up with (Jason Isbell, Dawes, Deer Tick) or  the rush of good clean air in God's country.  Maybe it's the inspiration from driving past Ronald Reagan's boyhood home, Dixon IL.  More than likely it was simply synapses misfiring after staring into the sun for three hours.  Nonetheless, things always become much clearer, like...

1.  Telepathy would be a terrible superpower to have. Invisibility, however, would be really interesting.
2.  The rock star fantasy crushes the sports star one.
3.  Everything in Life can be explained with a Venn diagram.
4.  The human race never loses its capacity to surprise. 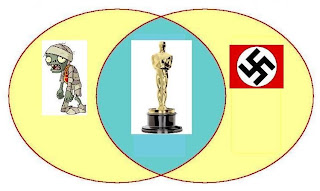 This last point was driven home last weekend when I went back for an informal golf-based high school reunion.  Golf, beers, golf and beers, food, more beers, sleep.  Rinse and repeat.  Iowans are mocked for their simplicity and yet this operating model was tough to criticize.  And here's what I learned:

-  Our QB, who I re-hashed Monty Python's show "Now For Something Completely Different" every Monday morning in the school cafeteria, is now a mortician. Did NOT see that coming.

-  The guy who sold everyone weed is now bald-headed, wealthy and the Dry Cleaner King of the Quad Cities.  Hmmm.  Can you say, "Walter White"?

-  Another stoner, who I thought would never live to see 30, is a successful contractor and a 5-day / week scratch golfer.

-  Apparently, I once dated a lesbian. (Explaining A LOT.)

-  Our star RB is now a successful bookie in California.
That actually isn't a surprise.  Even in HS, the kid would bet on grass growing. 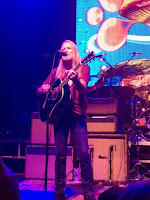 Surprise #2: earlier this week I had the pleasure of accompanying Rasmus & Son to the Allman Bros. show at the Chicago Theatre.  They were terrific even if Gregg now plays mainly the role of figurehead. But imagine who I should spy across the aisle from me but a guy looking just like Migratory Bird Week Guy from my last blog! Out of his habitat.  Could it be?  (Honestly, who knows. But for the purpose of this story, absolutely.)

Rockin' a hawaiian floral print shirt, khaki shorts and flip-flops,  MBWG was not looking his original NW Indiana, professorial self. Rather, he had the appearance of a man not unfamiliar with the "better living through creative chemistry" operating principle.

Not that those lifestyles are mutually exclusive.

Alternating between howling, barking and shouting in an ancient Elvish tongue, for the better part of three hours he was One With The Music.  And a living example of growing up oxygen-deprived in the South.

But I digress.  The point is, many people change.  And their life's arc doesn't necessarily end up like you think it's going to.  Leading me, once again, to the topic of Tommy Rees and Season 2013...

Song of the Week
The skeptic would say I'm getting my props in early - before the bad stuff happens - but this song goes out to you, Tommy Rees.  Could there be a more perfect anthem for him, going into this season, than The Counting Crows "Have You Seen Me Lately"?  I think not.

I think he's gonna surprise.  And in a very good way.

Get away from me, this isn't gonna be easy
But I don't need you, believe me.
You got a piece of me but it's just a little piece of me
And I don't need anyone
And these days I feel like I'm fading away
Like sometimes when I hear myself on the radio...
Have you seen me lately?

2013's Betting Construct
The predictions are ever trickling in ever so slowly... and rightfully so - there's Big Money on the line despite the fact we've held to an inflation-free $25 fee.

So... to make things MORE INTERESTING, we're (and by 'we' I mean I'm) adding a prop bet that each contestant MUST ANSWER, to act as a tie breaker in the inevitable event that everyone's bets collect around the same number of wins...

Used in a sentence:  With only a week to go until the start of the season, young Terry was practically giddy at the prospect of the acute logorrhea he would produce in pre-game, 'A' Lot banter. 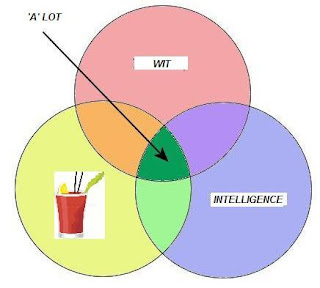 Cocktail of the Week
Another seasonal recommendation.  Unless you're like me, who enjoys the refreshing nature of these bad boys year round..
The Worker's Comp

Stir all the ingredients in a glass with ice.  This is actually a pretty good breakfast drink, so have two of them, because you forgot to eat your cereal this morning.  Stumble over to 'A' Lot.  You're so happy - IT'S FOOTBALL SEASON! - you don't even hear Butch, the lot attendant, yelling "Look out, bro!" The gate post hits you pretty hard on the head.  What the hell? you think. You weren't even aware that was even operative.

When you wake up, a university official is crouching over you, asking you to sign something.  You make out the words "waive" and "liablity" before passing out again.

Buddy's buddy
He's a Hogan acolyte, almost surely gets his hair done at Super Cuts (w. Ricky Fowler), his face connotes an inscrutable "could you please repeat the question?" expression... and he's won one more major than Tiger has in the past six years.

His name has already become a verb (though I'm not entirely sure what it means.) 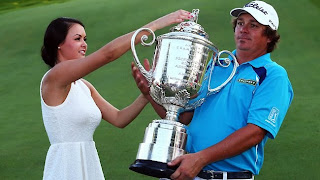 And your bride...  Babraham Lincoln.

And the post-PGA Championship winning Butt Pat that every guy on the planet took note of.  And loved him for.

Jason Dufner, if Bud Lite were still doing their Real Men of Genius campaign, you'd be the poster boy.  You'll have to settle for being this week's Buddy's buddy.

1.  LA Angels.   How much was that Albert Pujols contract for?
2.  Tiger Mickelson.    In this past PGA championship, they were basically the same guy.  And completely irrelevant after their first nine holes.  Huzzah! 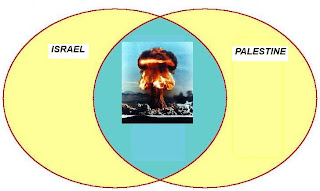 Crash's Cretins
It occurs to me that to this point, cretinism has been solely the bastion of men. But unlike the Augusta National troglodytes, I'm more than willing to let women into this club. and who better to be the first member than...

1.  Maria Sharapova.    Legally changing her name to Sugarpova, ostensibly to capitalize on US Open exposure, to promote her candy company.  Sugar. Candy.  Get it?! Perhaps 'pova' means 'stupid' in Russian...

2.  Wow.   Don't know exactly how to label this... there's my typical brand of cretinism - blending stupidity and silliness.
Then there's the real thing:

"Two teenagers were charged Tuesday with first-degree murder in the shooting death of a college baseball player out for a jog in Oklahoma — a crime that one teen said they carried out simply because they were bored, according to police … “They saw Christopher go by, and one of them said: ‘There’s our target,’” the chief, Danny Ford, told the AP. “The boy who has talked to us said, ‘We were bored and didn’t have anything to do, so we decided to kill somebody...’”

3.  Johnny Football.  Apparently, you come from a relatively affluent family. Which means you don't really need the money. And yet you break the most clear cut rule in the NCAA book, jeopardizing your eligibility and your NFL prospects. Kay Corrigan might say, "that boy's got more money than brains."  True dat, mom. 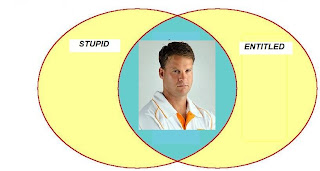 "I want them to play Britney Spears at my funeral.  That way I won't feel so bad about being dead, and everyone will know there's something worse than death."
Gary Numan

Britney's response (of sorts):
"The cool thing about being famous is traveling.  I've always wanted to travel across seas, like to Canada and stuff..."


Recruiting
What was 17 is now 16 with the de-commitment of the class's marquee player, 5-star RB Elijah Hood this week.  From his announcement, it would appear that the lad got some serious familial pressure to stay local (North Carolina).  While certainly a drag - the kid is supposed to be a total stud and I was really looking forward to making all sorts of prophet Elijah references... the good news is that (presuming this year's freshmen RB's are as good as advertised), this might be the right year to miss at that particular position.

Plus prophet Elijah was a total diva - who calls themselves a 'wonder worker' (other than CEO's to their Boards)?

I'd take the much lower maintenance John the Baptist any day, even without his head.

Memo to Bud Selig:  if you want to attack the PED problem, you might want to start with the Little League... one recent World Series qualifying game had starting pitchers that went 6'4" / 166 lbs. and 6'3"/ 219 lbs.

Final Thought - II
Fan of Mumford & Sons?  Yes? No?  Regardless, check out this video of theirs, starring Ed Helms, Jason Bateman, Jason Sudeikis and Will Forte.  Nice song, really funny.  Always nice to see entertainers demonstrate a sense of humor...

Get in those predictions!