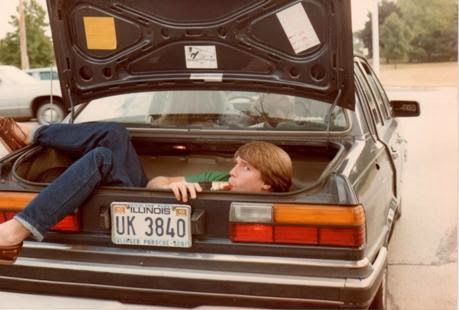 There once was a fellow named Jerry
Who's hairstyle rarely did vary.
And every five years
He led all his peers
In reveling incredibly merry.

What?  You thought haiku was my only poetic metier?

Little known fact:  Shakespeare loved limericks. Especially those of the bawdy 'there once was a wench from Leeds, who oft did frequent the weeds...' variety.

Back to our previously scheduled program...

Not long ago, Raz and I went and saw Ralph Stanley - 87 yrs. young and he of (relative) "Oh Brother Where Art Thou" bluegrass music fame .

And besides being taken aback by his resemblance to Exeter, the mysterious alien from Metaluna intent on plundering Earth's uranium in the 1955 sci-fi classic, "This Island Earth", we were struck by both his stamina (he stood for almost the entire 90 minute performance) and his genuine love for what he was doing.

Why do I bring Ralph up? Because he clearly wanted to be where he was - on that stage... with his grandson and the other Foggy Bottom Boys (or whatever they were called)... plying his craft.

Which brings us to the off-season and the usual ch-ch-changes... coaches leaving, recruits flipping and flopping... the annual mating ritual that ultimately demands of the high school star, you've-had-a-year-so-make-a-choice...

Just where do you want to be?

Apparently it's not as easy as it looks.


Song of the Week
I've always been fascinated by the concept of the Butterfly Effect... the notion that a seemingly innocuous, random event somewhere in the world can result in a ripple effect of something profound later on.  Like Lini getting elected Grace Hall President on a "no hall tax!" platform - setting in motion a career that can only described as meteoric in its trajectory but also foretelling the whole Tea Party movement - so like Jerry... defiant, principled, unfathomable.

But I digress.  So follow this recent sequence:  daughter Shea goes off to Nashville last summer, interns for American Songwriter magazine, comes home with a few new awesome music references (Jason Isbell!), makes her father proud, inspires him to subscribe to AS, reads in the first issue about Uncle Tupelo's re-issue of their "No Depression" album (ironically a perfectly fitting theme for any ND fan's off-season) while at the same time receiving a cd from musical svengali JA Splendore - no doubt inspired by all the southern alt rock I was throwing out in the autumn - that had songs from Uncle Tupelo front man Jay Farrar's band's on it!

Coincidence?  I think not.

And so, thematically, I offer you a Recruiting two-fer, courtesy of Mr. Farrar's bands...

First from the football program's perspective, a terrific Bob Dylan song.  Replace "Moonshiner" with 'recruiter' and one could reinterpret the song as the forlorn wail of a guy who's spent his life chasing 18 yr. old pinheads who, due to their freakish athletic skill set, keep him employed.  It's no life to lead.  But it's a little too late for a career change...

"I've been a moonshiner recruiter for 17 long years
I've spent all my money on whiskey and beer.
I go to some hollow and set my still,
And if the whiskey don't kill me, then I don't know what will..." 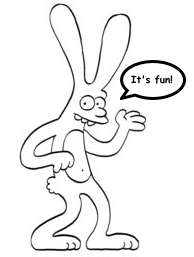 Recruiting Summary
It is an irony of Sisyphus-ian proportions that for all of us who survived our children's Bataan Death March-like progression through the hormonal teens, we remain masochistic enough to care about a collection of teenagers we don't even know... will probably never know... and their college decision-making process.  Why do we expect them to be linear thinkers?  Because we were?  Yeah, sure.  One word for ya on that:  Ungie.

Still,  some of them make Mark look like the poster child for reliability.  And when the inevitable feeding frenzy of the final few weeks occur, one wonders why you put in all that time following the process.  In swoops Meyer / Saban / Mora / Sark and boom!  Not that ND is especially above the fray when it comes to 11th hour courtin' and sparkin' (though to be fair it's typically in a reactive "you took ours, we gotta go get us a replacement" context).

I hate it.  And I've got one easy solution:  Early Signing Period.  Make it September 1st. Or December 1st.  (It seems to work just fine for basketball.)   If you're truly with us, Mr. "I'm Committed But I'm Still Gonna Take My Visits Especially To The Schools With The Smokin' Hot Co-Eds And Boosters-With-Envelopes That's Okay, Isn't It?", prove it.  If you don't sign, we're on to Plan B with more than the 2-3 weeks to react that we get now.

Otherwise, an easy guide to understanding the dynamics involved in college recruiting... 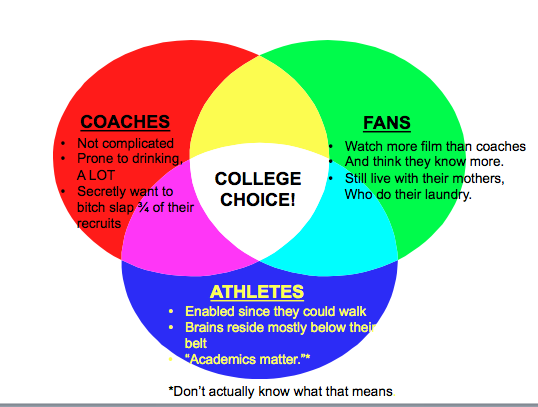 Song #2 is inspired by that particular breed of Fandom lunatic fringe that always perceive the sky to be falling.  And indeed one could argue that ND closed this year in a fairly ho hum fashion but Armageddon Time? No.

I don't have any idea what Son Volt's "Route" is about.  Jay Farrar seems to have been schooled at The Michael Stipe Institute of Lyric Opacity.  But Nihilists, Cub fans and 'ND Always Disappoints In Recruiting' advocates should love this song. There is nary a single optimistic thought in it.  (Well maybe one, about the weather.)  And yet, it's precisely the type of song that gets me a "you were going 80 in a construction zone, son, and I'm not in an especially lenient mood" experience. (I'll thank you not to share that w Lisa...)

"Reality, it burns.
The way we're living is worse.
The pillars of inspiration are all falling down.
And it's now or never,
Too close to the latter.
We're all living proof that nothing lasts..."


Or maybe it's about the Final Days of SEC Dominance.  That would be nice.

Nonetheless, recruiting is never entirely straightforward.  And for ND, there's much to like about the class and a few things to lament.  Just like Life.   To wit:

Word of the Month
SANGFROID