Create your survey with SurveyMonkey

Well Saturday's outcome took a little longer to feel good about than anticipated.

And in a 45º, rainy, foggy, chill-to-the-bone November 'Hound of Baskerville" atmosphere... I could've done with a little more... expeditious resolution, But hey, by all means, Notre Dame, take your time winning this one.   I've got nowhere to go...


Though I've had more than one of the Behren's Bloody Mary - so Life isn't entirely uncomfortable.

Okay, so there's a fairly pivotal scene in Young Frankenstein, perhaps the greatest film in the Mel Brooks oeuvre (where much like last Saturday, cold-dark-damp-misty environs also play a central role) Igor - Dr. Frankenstein's faithful (and frankly, woefully underrated assistant) fails to complete a relatively straightforward mission: procure the brain of Hans Delbruch, Scientist and Saint from a nearby laboratory.  Instead he returns with that of "Abby Someone", whom we come to understand to belong to Abby Normal.

To be fair, it's a common enough mistake - who among us hasn't started an evening with a good, even noble, mission and having it end up in a tragically flawed, almost diseased state?  It'd be like setting out from, say, North Quad for an awesome Morrissey party and ending up at Dillon with no subsequent memory of the events that ensued.  Only to hear, distressingly, the expression 'uncommon level of depravity' tossed around quite a lot.  Shit happens.

I share this analogy as my chosen profession, Advertising-Marketing-Whatever, involves the  Sisyphean pursuit of trying to fathom, and drive, human behavior from intrinsically  fucked up unpredictable organisms. Which often involves a boatload of neuroscience.  And neuroscience tells us that at any given time, one can be curious or fearful but you cannot be both at the same time.


And those two emotions would fairly describe ND Nation's state of mind for each half of last Saturday's Wake Forest game:


1st Half:  Gee, I wonder if the Irish can keep the strong October effort going?  (Well, half the team did.)

2nd Half:  WTF! This is not freaking happening.  (And ultimately, it didn't. But not without wishing the clock moved a tad faster.)

But the point here remains neurologically-based:  sometimes you get the good brain, sometimes you get the bad.  ND's team didn't regress, per sé. But for whatever reason - I choose to believe mental fatigue (they're 18, 19, 20 yr. olds after all) - their brains weren't what they intended.  And as a fanboy, it would suggest my head wasn't either - so easily resorting back to the fretful, frustrated 2016 version.

Funny how the mind works. 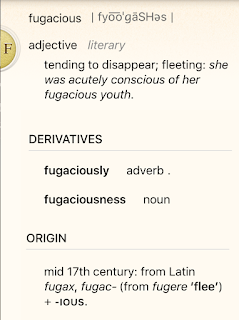 Used in a sentence:  There was a moment, fairly early, during last Saturday's game - after the public announcer made some declaration about the refs requiring the stadium to turn down the music when Wake Forest had the ball...

...when the crowd got really loud - and the defense got really engaged.  Huzzah! Young Jerrence thought the team had finally  been shook out of a what was surely a temporary and uncharacteristic malaise.

But that 'Return To Defensive Excellence' proved fugacious as from almost thereon after, the Wake Deacons shredded the Irish defense in a consistent, almost clinical, fashion involving short timing-based passes and the occasional run to keep the Irish off balance, aided by ND's apparent, newfound commitment to bad tackling.

Let's face it, the rain Saturday wasn't that bad - we've all been in worse (see Waterville, Ireland, 1994)

And after all, we did win the game. And it really wasn't as close as the final score would suggest.

In Singin' In The Rain, silent film stuntman and former hoofer Don Lockwood (Gene Kelly, also the film's co-director) is happy to make the literal leap into speaking roles - if only the voice of his famed on-screen partner Lina Lamont, didn't sound like nails on a chalkboard.

Lucky for Lockwood, his chorus girl crush (a 20 year old Debbie Reynolds) has a voice sent from heaven above.  Naturally she steps in to speak up for Lamont, comedic chaos ensues, and boy gets girl (and gets wet) in the end.

One of the most iconic dance sequences ever captured on film inspires this all-weather get-up-and-go drink that's guaranteed to send you skipping down sidewalks.

Be a patriot with an American-as-brandy beverage that'll have you saluting more than flags.
Ready to make a splash?  Pour all the ingredients into a flute, drop in the raspberry and garnish with mini-umbrella.

"It could have been a 900-yard day for them if they hit all their deep shots..."


At last, a semi-gracious opposing coach whose honest observation underscores a frightening truth:  if our WR's don't start consistently hanging on to catchable balls, it's going to cost us a winnable game.


Once again, in no particular order:


1.  A weird game. And despite racking up 384 yards rushing, the game plan felt inordinately passing oriented, didn't it? A bit perplexing.

2.  Neuroscience alert! This game reminded me of the UNC game - another game where, from the first series, ND just didn't look mentally into it.  And defensively, more missed tackles in this game - not something one has had to make much of a point - than collectively all year.

3.  Josh Adams is close to getting the dreaded 'china doll' reputation.  He is hurt a lot.  And yes, it was probably the right move for the sake of the season (and this week) but man, this can't be helping his 'tough guy' reputation with NFL scouts.

4.  Not only am I moving off ESB as a disappointment, I'm beginning to fear he's going to cost us a game.  Right now, I think he's the team's #3 WR.

And for the record, I like him. I don't think he's a slacker.  I just don't understand his lack of prodcutivity, especially involving catchable balls.

5.   Chase Claypool wearing a ski mask?  In 45º weather?  Dude, you're from British Columbia - this should be like Spring for you!

6.  Did I mention that the Stayer tailgater was still top notch?

7.  Let's give it up for John Wolford, Wake's QB.  He got the ball out really fast and really accurate.  An awfully tough combination to defense.  I wonder if he's going to go down as the best QB ND faces this year.

8. Did anyone else see Josh Adams doing The Time Warp ("it's just a pelvic thrust...") on the sidelines? 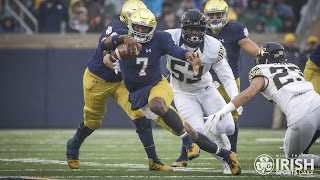 9.  Wants some optimism?  Wimbush's passing.  He was on the money virtually every throw.

I hope just some coach is tearing his WR's a new one this week.  The # of drops was
ridiculous.


10.  It may be - hopefully - completely irrelevant but... Ian Book played really well.  As far as back up's who might need to spell a starter who gets occasionally dinged up, he's looking like a keeper.

And the same could be said for Deon McIntosh.


11.  Conspiracy theorists - and who doesn't enjoy a good conspiracy, it makes our otherwise pedestrian existence so much more interesting, yes? - will maintain this was a 'bad' win, one that allows a crack in the door for the other conferences to try and push their candidates (e.g., Oklahoma, Wisconsin) into the BCS playoff.  Perhaps.

I still believe, short of our strength of schedule falling apart, win out and we're in.

First off, do you know how hard it is to NOT give this award to Justin Verlander?

That, my friends, is a strong week.

Mike Brey, also had an excellent week, signing four 4-star b-ballers, a class considered his best since he's been at ND, with two guys who've been called 2.0 versions of Jerian Grant and Pat Connaughton.  If they're anywhere near that good,  Tom Feifar is going to be one happy guy. 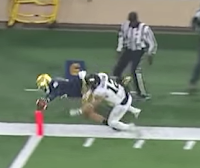 But alas, Buddy's buddy has to go to a footballer and while by all rights this should be Brandon's week, I still feel bigger things lay ahead for him.

So Chance Claypool, come on down:  9 catches, 180 yards and 2 TD's.  Even with an embarrassing drop, that's a nice game.

For the intrepid 28 contestants still remaining, there's this:  not only could immense riches be winging your way in January - unlike last year, we are bowl-eligible so we'll definitely be talking about this into '18 - but inscribed glory immortalized on the newly donated* Art Lindon Trophy, to be maintained in The Scotchlandia Hall of Fame (next to the Glenmorangie 18):

* The Scotchlandia Foundation is a recognized 501(c)(3) organization; consult your financial consultant for advice re your personal contributions as it relates to changing tax law.

Each week, with each victory, the BCS playoff conundrum gets a little clearer...

Win and you're in.   Maybe. Probably.

And, of course, have all our opponents win for Strength of Schedule benefits.  Except for Stanford.  I've had it with them.  They compete for the same recruits we do and their season's already in the dumpster.  So whether they win or lose, they don't do jack for us.

I hope Washington spanks them. 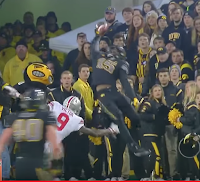 But I'll give it a shot:

1.  The Big Ten.   Way to show up, Ohio State. Penn State. Love the way you not only napalmed your chances but pretty much screwed Wisconsin's as well.

3.  Los Angeles Dodgers.  Don't necessarily hate you, though all that Hollywood celebrity fandom coming out of the woodwork got a little much.  Just very happy for Houston.  And as a 100 win team, not exactly undeserving.

To summarize what must be yet another colossally discouraging week for you:  you've steadfastly denied any knowledge of the pay-to-play plot at UL and yet... allegations from the unsealed indictment suggests, per a senior Adidas executive involved, you not only knew about the plan to send payments from the shoe company to the family of your top recruit - but that you agreed to actively participate in it.

Such are the heartfelt stream-of-conscious meanderings of a fanbase less than pleased with their freshman QB.

As if he's the reason they suck.  Yikes. 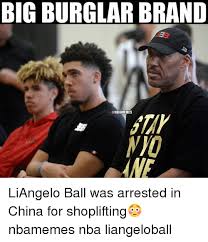 3. LiAngelo Ball and his UCLA knucklehead teammates .  Shoplifting in China seemed like a good idea to you?  What was the plan, exactly?  That keen decision making alone should've necessitated a drug test.

If only it'd been Singapore.

4.  LaVar Ball.  I'm willing - and almost certain - to be proven wrong.  But I don't think one screws with the Chinese government by saying an arrest in 'no big thing.'  Beyond the fact, already, that it's your über-entitled son stealing something - WTF kind of morals are you even instilling in your kids?

5.  Broyles Award committee.  Just announced its nominees for top Assistant Coach of the Year.  56 candidates.  It's Week Freaking 10 of the college football year - and that's your short list?


6. Fox announcers.    All you Flutie haters out there, I hope you caught any of the Oklahoma - OSU game and heard just how much worse announcing could get.  Their over-the-top desire to make sweet, sweet love to Heisman Trophy Flavor of the Week Baker Mayfield - he who threw a stupid goal line INT that almost cost his team the game - was so extreme I wanted to call my HR rep and report an uncomfortable workplace environment. 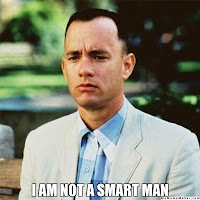 7.  Notre Dame fan sitting behind me.  Yeah, you, the guy who bitched about Brandon Wimbush hauling ass to the goal line right before halftime, getting tripped up a yard short and hurting his wrist...

And your issue with his effort was what exactly?  You thought he was trying to get hurt?  Or just stupidly trying to score?  Points the team ultimately needed, by the way?

Saturday night.
South Beach.
Mano a mano.
Catholics vs. Convicts.
Let's do this.