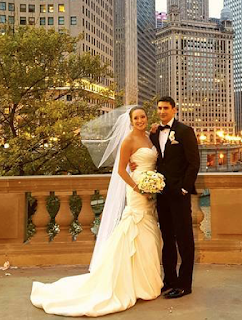 "The Search For Happiness":  'What we can learn from Costa Rica,
Denmark, and Singapore - the most joyful places on the planet...'

Maybe.  I'm sure they're all very pleasant locales.

But in my world, downtown Chicago last Saturday night beat the pants off those cities if one's going to compare levels of bliss:

So, All's Right In The World.  At least within a very specific geography and from kickoff reverential wedding ceremony through end-of reception-late-night-snacks and Uber home. 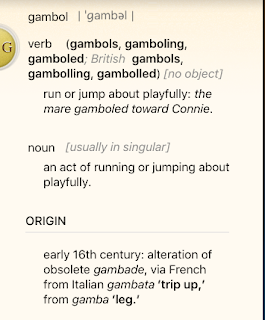 Used in a sentence:  As young Jerrence watched the crowd at his daughter's wedding reception, he grew concerned.

Despite his embracing the elation associated with the occasion - was there too much reveling? Singing, dancing and gamboling about... he wondered, "what would church doctrine have to say about such orgiastic activity?"

Then he saw the three Navy SEAL's at the epicenter of the merriment - gee, they look like they're really having fun - and recalled the special instruction he knew they'd received, allowed his mind to wander a bit about how they might utilize that training if provoked and then reminded himself that the aforementioned doctrine was probably more a guideline than a hard and fast rule.

With some of the military's young 'best and brightest' in town...

...something decidedly patriotic seems like the appropriate theme to dwell on this week... 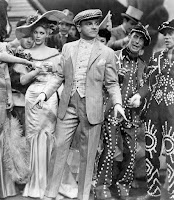 George M. Cohan provided much of the soundtrack for the early 20th century, including "You're A Grand Old Flag" and this film's title tune.  His incredible life - from a childhood performing in vaudeville, all the way to the White House (where he received a Congressional Gold Medal from FDR) - plays here like a musicalized, I-can't-believe-how-many-things-one-guy-could-accomplish version of Forrest Gump.

In the role of Cohan, Oscar winner Jimmy Cagney can't really sing or dance - but then is there anything more American than faking it til you make it.  (Not this past political year there isn't.)

Be a patriot with an American-as-brandy beverage that'll have you saluting more than flags.
Place the apple slice and one cherry at the bottom of a rocks glass.  Add the maple syrup and bitters, and muddle the ingredients.

Fill the glass with ice, add the brandy and garnish with the other cherry - skewering it with an American-flag toothpick, of course.

"But moving forward, I'm scared for other teams because we're coming to punish each and every opponent that we play..."

I had no idea he was that serious. 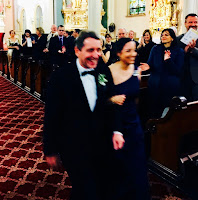 "If you even think about looking at your phone for a score during the wedding ceremony, I will end you..."

Lisa Minnella
Mother-of-the-bride, to her husband

There was never any doubt she was that serious.


Quote of the Week - III 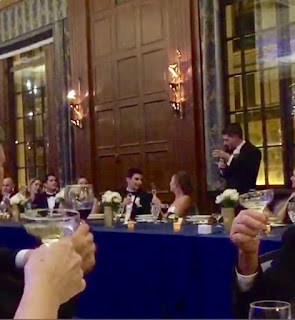 "...Paul and Ryan, I'd like you to turn, look at each other and remember this moment. You are now looking into the eyes of the person who is statistically most likely to murder you."

Give them a few years - he has no idea how accurate that statement is.

It's astounding - time is fleeting.
Madness takes its toll...

1.  Madness indeed. Could we really be this good?

2.  Speaking of time warps, as one friend theorized this weekend, is Brandon Wimbush the new Tony Rice?  And did everyone notice how his early passing success seems to change everything?


3.  Stepherson is clearly the team's best receiver.  Maybe Kelly's channeling of disciplinary Lou Holtz actually worked with him.  Let's pray he can hold it on the road for the rest of the year.

4.   I've given up on Mack - I'm not even sure why they throw to him. Maybe with the concussion protocol, Durham Smythe will get even more chances but it's Equanimeous who's beginning to alarm me.  I fear he's gonna drop something soon that's going to be meaningful.


6.  Did anyone else notice that a few of the Wolfpack - not all but a few - seem to be whiny little punks? 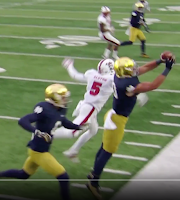 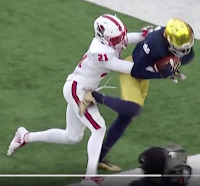 7. Who said football wasn't a game of inches?


8.  Another game, another 70 yard run where Josh Adams isn't. even. touched.  Not wishing to disrespect him - he's a total stud who should be getting a ton more Heisman buzz - but any of the Class of '79 could've run through some of those holes.  Mammoth.

As an aside, I, too, thought we were offside on that INT until I saw it again. Flinching isn't the same as breaking the plane.  Great non-call.  I'll never bitch about the refs again.

10.   Because I still have Napoleon Complex issues to work through, I loved once again Chip Long going for the jugular with a couple late game bombs that were nearly completed - one overthrown by inches (Wimbush will complete those soon) and one that fell incomplete due to the most egregious missed call of a defensive hold...

So much for the 'no bitching about the refs' rule.


11.  The offensive calculus appears to pound the other team's front seven into submission for ~ 3 quarters, then pound them some more with a 2nd or 3rd fresh RB... then when they're sucked in (and maybe a tad dazed), THROW THE BOMB! 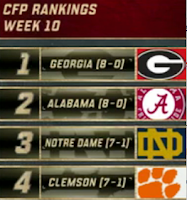 12.   Defensive fundamentals are just so much more gratifying to watch this year.  Certainly not perfect but...  players swarm, when they hit they wrap and they're assignment sure.  Talk about what a difference a year (and a DC) makes.


13. I guess there's now no running from the spotlight.  ND, you seem to be "in it to win it".  But if you think we're still entirely masters of our own destiny, think again.  Read this article to understand how much variance can still occur.

It's getting tough to try to identify a fresh Buddy winner each week.

Not that there's no one to nominate.

There's too many to nominate.

At some point, one has to show some loves to the TE's not named Alizé.  Or Sam Mustipher who seems to get only deflected praise, playing next to two future 1st round draft choices - and getting sweet retribution for last year's snapping debacle in the monsoon.  Or a guy who might be becoming the defensive backfield's 'secret sauce' as the (I think) nickel back, Troy Pride, Jr.

Instead, after 8 games - 8 data points - I'm going off the field and citing S&C coach Matt Balis. 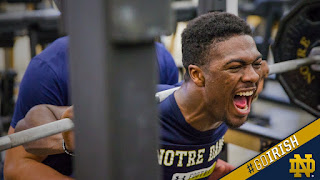 Every week its a revelation to me how much better ND is in the 2nd half - and how significantly superior they are to the opposition.  Same players on basically both sides of the ball - different speed, better stamina and agility.   And mental fortitude.

Coach Kelly, it would appear loyalty is over-rated when it comes to hiring your staff.

This is beginning to look like a plague, a wonderful deadly virus of spent wagers strewn everywhere...

The problem continues as Notre Dame is now squarely in the BCS playoff conversation with four games still to play...

...so the schadenfreude calculus gets even more complicated.  And for another couple weeks, probably not worth trying too hard to figure out beyond this:


1.  Penn State.   I'm not even sure this loss was in ND's best interest but it's just so fun to a) watch chaos occur just as any team gets anointed as The Next Big Thing - pay attention, ND! - and b) see JoePa's team gag. 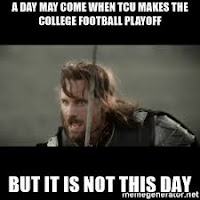 2. TCU.  There aren't words to describe how little regard I have for the Big 12 teams that play Arena Ball football and get highly ranked because they can win 70 - 45.  So thank you, Iowa State Cyclones.

4.  Florida State.  Getting smoked by Boston College.  Really?  I swear this never gets old.

1.  Nick Saban.   Every year, I try to reconcile my feelings for him.  Make peace.  Write him off as an idiot savant in an ethically compromised profession.  Then he goes and throws another log on the fire when one of his players gets arrested, rather predictably now, and he counsels a "don't rush to judgment, boys-will-be-boys" attitude. 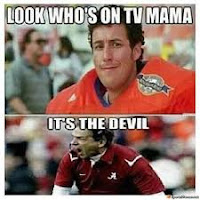 This week it was Deonte Thompson, his starting kick returner / DB, who was handed a felony indictment for (and I quote) "aggravated assault causing serious bodily harm."  That's legal talk for "he helped beat the shit out of a guy last April, breaking multiple bones in the fellow's face and leaving him with four permanent plates."  Good luck with future TSA screenings, pal.

But don't you worry - coach Nick is following the legal proceedings carefully and will talk action after it's pled down to a misdemeanor next February once it's swiftly adjudicated. 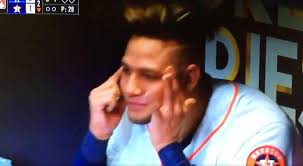 2. Yuli Gurriel.   I'm not sure who's the bigger idiot here, the Cuban who, after hitting a HR, thinks it's clever to mock the pitcher's* Asian looks - on a telecast seen by a billion people.  (Yeah, Yuli, like Cuba is so genetically superior.)

Or the MLB, who chooses to suspend him for 5 games - NEXT year.  Wow, way to take a stand.

*A fellow who's now pitching Game 7 of the World Series with serious extra motivation.  Your teammates must be so pleased.


3.  USA Today / Amway Coaches Poll.  Let me get this straight... the AP writers' deem ND to be the 5th best team in the country, last night's BCS Playoff committee saw us as the 3rd highest and yet the FBS coaches - whose pettiness and craven self-interest make high school girls look like Mother Theresa - moved us two spots to 8th?  The Amway sponsorship makes so much more sense now. 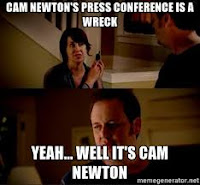 4.  Cam Newton .    Having walked out of yet another press conference because he didn't like a question - maybe he didn't understand it - clearly the early favorite for 2017 NFL MIP, Most Immature Player.


5.  Jeremy Van Ert.  Not to be confused with Jeremy Inert, the protagonist in my as yet-to-be-written novella, which may or may not be based on real events, about a man who wills himself into a year-long coma where he lives a vivid fantasy life as his alter-ego, Marsupial de Blanco, The White Kangaroo - international billionaire jewel thief, raconteur, mah jongg enthusiast and all around lovable Aussie scoundrel... 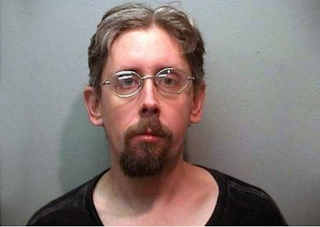 Real Life Jeremy walked into his local suburban Milwaukee convenience store last week to buy some beer, as one does, and got trapped in the walk-in cooler when the door automatically locked upon midnight.  Kinda like Cinderella, except in reverse.

Things looked bleak for Jeremy but, as Kay Corrigan is so fond of saying, "God doesn't close a door that He doesn't open a walk-in beer cooler."  Taking that quite literally to heart, Mr. Van Ert downed three malt liquors and a beer chaser before being 'found' the following morning, despite his best efforts not to (there being only so many places one can hide in a walk in convenience store refrigerator).

Sadly, unlike Cinderella, this story does not end happily. In his attempt to flee, Jeremy tripped over a 30-pack of Bud Light, broke three more bottles, got arrested and may still be sitting in jail where, presumably, there are no adult beverages to preoccupy him.