"I wonder what's over that rainbow..."


So I'm sitting on the porch, contemplating the future -  both near-term (what crops can I quickly plant and get some of that sweet $12B relief money) as well as retirement-oriented:

The czarina and I have begun discussing a leave of Scotchlandia a few years down the road - call it exile or abdication of the throne, whatever, something else beckons for us - and this thought crossed my mind: 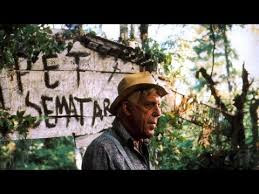 When we ultimately sell the farm, do we have to, um, cop to the, um, increasingly impressive pet cemetery we've got going next to the barn?

I mean, there's gonna be a lot of bones out there - skeletons that could be unwittingly dug up by, say, an inquisitive family pet.

I'm not even sure I know how many are out there.  At least a couple cats and a dog.  I'd imagine those revelations could be fairly... unnerving... if one weren't appropriately forewarned.

And that doesn't even include Doc, the horse buried in the pasture, tragically stuck down with colic in the mid-90's.  Little chance of that discovery, however - they're gonna need a backhoe to find him somewhere under those 11 acres.

Still, thank God for the hawks.  At least when they nab one of our chickens, they leave nothing - just whoosh - and a pile of feathers.  Very clinical.

Nonetheless, I rue the day Lisa didn't allow me to build Buddy the mausoleum he so richly deserved.  Now, at some point, he's gonna be just another archeological 'find' that, if misinterpreted, could set us up to be the Fred and Rosemary West of Porter County.

If we only lived in Wisconsin!  These kind of discoveries wouldn't be an issue at all!

In fact, they'd just be assumed as part of a typical transfer of title.


But hey, we've got a few years more to wrestle with this decision (of course, there'll likely be a few more 'volunteers' by that time)...

But what is Life if not a series of Confrontations with The Unanticipated?

Perhaps not so dissimilar to Notre Dame football prognostication, where the overwhelming majority of us will get our predictions horribly wrong, based on calculations and assumptions you thought reasonable, maybe even certain, at the time.

But that's part of the fun, isn't it?   We don't know what the team is gonna dig up in the backyard...

In these societally tumultuous times where, truth be told, precious little seems to make me terribly happy, I find myself reexamining - searching, really - those things that brings me true joy in life...

Raindrops on roses and whiskers on kittens
Bright copper kettles and warm woolen mittens
Brown paper packages tied up with strings
These are a few of my favorite things...

But I watch the news... I read the tea leaves... and believe you me, I see what's ahead and I'm getting with the program ASAP, comrade, if you catch my drift.

So this year's "ND success" construct comes with a Russian bent. 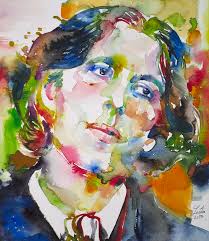 "We are all in the gutter but some of us are looking at the stars...”


This time of year, optimism abounds.  Good luck, everyone, with your wagers this year.

Here we are, something less than five weeks away for the 2018 home opener - and who do we kick it off with, literally and figuratively, but Michigan.

An opponent that, for many of us in the midwest, is akin to one's Evil Twin - schools, 180 miles apart that recruit both many of the same athletes and same students. 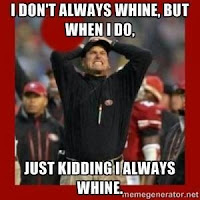 An opponent whose games have often turned into instant classics, or nightmares.


An opponent who, like this cocktail's cinematic inspiration, has a protagonist both unforgettable and mind numbingly irritating.

But it is gin-based, so it's got that going for it.

In the days before televised talent contests, this film's forward-thinking producer launched a national search for his leading lady, landing on the very British Vivien Leigh to play the very Southern Scarlett O'Hara - the original Miss Bossy-pants of the high-and-mightiest order.

She was the one with a tongue like a knife.

..
Leigh's feisty on-screen chemistry with Clark Gable remains both immortal and also a tad misleading:  they famously challenged each other on-set, which may have helped shoot the Civil War-themed Gone With The Wind into the history books as a top-earning, unrelenting, riches-to-rags melodrama.

Our hot-as-a-burning-Atlanta hooch is sure to start a few of your own battles... at least over who gets the first pour.
Muddle the jalpeños, peach 1 rosemary sprig, and simple syrup in a shaker.  Add the gin, Campari, lemon juice and a handful of ice to the shaker and shake well. Double strain over fresh ice in a rocks glass, fill with the club soda and garnish with the remaining rosemary sprig.  Sip slow - you've got 3+ hours to get through.  And I'm not talking about the movie's length.

Annually, this specifically timed recognition almost invariably goes to the winner of The British Open, it being one of my favorite viewing experiences, not the least of which is due to the fact that a) one can wake up to it and b) it's over by early afternoon - leaving you virtually the whole day to get into other hijinx.

So one might think that Francesco Molinari would be the slam dunk here (mixing sport metaphors) - he's likeable, Italian and (critically for me, personally), no flash in the pan.  He was already arguably the best golfer in the world over the last few months.  And his was not a fluke.    So while I wish to extend a heartfelt auguri and buon complementi to him, he's not my first choice. 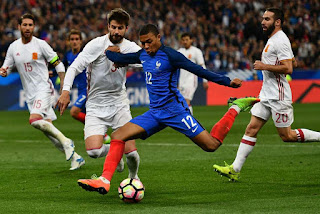 That would be France's Kylian Mbappe, the World Cup winning team 19 yr. old superstar who donated his entire tournament winnings - a cool $500,000'ish sum - to a charity that supports hospitalized / disabled children.  The more cynical of you might be thinking 'BFD, the kid probably makes $20M a year.'  Okay, but I don't see anyone else doing this.

Oh wait.  I do - many of his French teammates are following suit and donating their bonuses.   Talk about leadership.

Francesco and Kylian.  Okay, maybe this week it's a tie.

For better or worse, summer time seems to bring out the full gamut of 'bad actors' - from your garden variety dim-witted knucklehead to the oh-my-god-you're-so-far-more-heinous than I could have ever imagined. 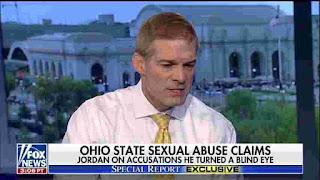 1.  Ohio State.  One has to hand it to the Big 10, when they choose to excel in something, they really commit.  First we had Penn State and L'Affair Sandusky... then there was Michigan State and Larry Nasser, which, for the sheer magnitude of atrocity made the nastiness in State College look practically ... unambitious.

Now we've got Ohio State - and a sitting congressman - at the center of another sexual-abuse-of-student-athletes scandal.  Currently standing 100+ accounts of 'misconduct' (a word reminiscent of the medical profession's use of the word 'discomfort' - i.e., how they describe other people's pain), Columbus must've looked on the goings on in East Lansing and thought, "Challenge Accepted!"  Yikes.

2.  Papa John.  Oh Mr. Schnatter, you have some esplainnin' to dooooo.  Imagine the lucrative career of a PR guru whose only advice to his CEO clients was to just. stop. talking.  And tweeting.

That exec would be a gazillionaire.

What makes Papa J a special kind of idiot, of course, is that this particular self-inflicted wound occurred during a PR training session.

Note to White America, young AND old:  there is literally zero acceptable occasions where it's appropriate for you to use the n-word.

3. Larry Fedora.  No one is ever going to mistake the collective body of football coaches - at really any level - for Team Mensa.  But UNC's head coach recent rant on football's safety-related rule changes surely being Western Civilization's Downfall, that CTE isn't a real thing...

But at least you did remind us of one thing, coach:  you don't actually have to be playing football to suffer brain damage.

4.  Joseph Lewis.  There are a lot of bad people in the world, more than a few them in the athletic world, blessed with almost preternatural skills that often enable them to skate through any accountability.  A few of them take your breath away with the level of antisocial behavior they manifest.  And this clown, a former 5-star recruit soon-to-be-dismissed USC WR (insert joke here) is off to an impressive start:  after completing a 21-day jail sentence, Mr. Lewis was arrested again, less than two weeks later - I hate it when that happens - on felony domestic battery.  Yikes.  All kidding aside, that kid needs help.

5. Terrell Owens.  You had a wait a whole three years to get into the HoF?  Well, Crimea cry me a river, pal.   Talk to Jerry Kramer, named to the All 50 Year NFL team, who waited freaking 45 years.

Leave the overdeveloped sense of entitlement to the Millennials, TO.

6.  Jerome Allen.  Who?  Well, of course you'd expect the Ivy Leagues to be innovators. Maybe just not in the particular area of recruiting strategies. One has sadly gotten used to recruiting scandals where schools are found to be paying athletes to select their programs.

But the other way around?!

Mr. Allen, the former Penn basketball coach, has been alleged to have received almost $75k in order to allow a kid to be considered a sought after Ivy League recruit - ostensibly improving the lad's chances of being accepted into the school.

Epilogue #1:  The kid did get into Penn.

Epilogue #2:  The rumor of Mr. Allen now teaching an Ethics Entrepreneurialism course in the Wharton School cannot be presently confirmed. 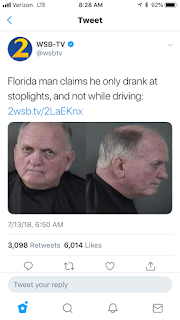 7.  "Florida Man, only drank at stoplights...".  If one had just a nickel for any article that starts, "Florida man claims..."

This one especially caught my attention.  Interesting - and perhaps revealing - that bourbon was his libation of choice.

I have only one question:  where was this defense when we were in the late '70s / early '80s?  (Especially for those living in Glenview.)