Week 1: Madman Across The Water

I went Euromad out on the road last fall...
Were it not for Mr. Gordon and his fine distillery
I might've never got this far... 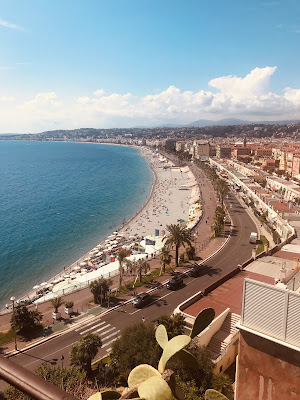 Dateline: Nice, France:  As Young Jerrence lounged along the Promenade des Anglias, sucking down Kir like they were energy drinks - good and good for you - his mind ran the full gamut of human contemplation.  There was the sheer beauty of France's south coast. And the food - he'd had the best sea bass in his life the night before... and of course, all the beautiful people including the 2,000 impossibly fit women in town for the IRONMAN 70.3 World Championships - each and every one them who could kick his ass, including - maybe especially - the 76 year old.  She appeared to be particularly badass.

But mostly, he thought about the injustice of not being born into extraordinary wealth, preferably something royal - Jerrence thought Viscount had a nice ring to it - where he could live the life he was truly destined for... to be the very best version of himself, The Viscount Jerrence, Lovable Louche.

Sure he loved his family.  Outside of the frisky calf / Rodeo Roundup trauma of his youth, Jerrence experienced a loving, reasonably well adjusted upbringing.

But that, by itself, wasn't really going to pay for his hefty, aperitif-ladened bar bill on a consistent basis, now was it?

As Jerrence contemplated the cosmic joke that been played upon him, more IRONMAN (IRONWOMEN?) ran past him.

The competitive spirit was clearly in the air.

4600 miles away in Louisville, KY a similar vibe was also kicking in.  Apparently, tis the season.

Are you ready for some football? 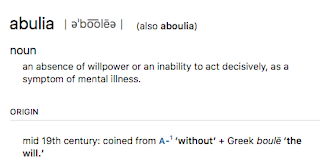 As Jerrence watched the replay of the game, and the uneven performance of Notre Dame's Ian Book, he recognized the symptoms in the QB's play almost immediately.

Because, only days earlier, he had witnessed the very same dysfunction in... himself.  That seaside Nice bar with the waiter peppering him with questions.

Kir?  But of course, monsieur.

"Too much!  Too many variables! I can't deal!" Young Jerrence thought. Until he had the epiphany that would save his sanity and become the primary operating principle for the rest of his trip: why not all of them?

"I say my good man, let's start with the Vin Blanc with Cremę de Cassis and see what happens after that.  The day is still young, oui?" 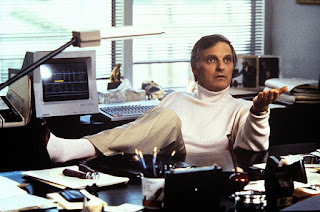 
Alda's character was talking about the secret to Comedy.

The same could be said about ND's defense.


With the massive caveat that I was pretty jet lagged when I watched the replay of the game, here's a few things that jumped out at me:

1.  Ian better get it together. Fast.  If he doesn't look Other Worldly against New Mexico...

2.  It bears re-stating early:  ND is going to get everyone's best game.

And for Louisville, new coach + at home +zero expectations = ripe conditions for them to come out strong.

3.  Looks like the LB's clearly miss Te'von and Drue, not surprisingly.

That said, Drew White looked pretty tough.  But is he just Joe Schmidt 2.0?   (Which isn't necessarily a bad thing depending on which year of Joe Schmidt one recalls.)

4.  Kyle Hamilton. S-T-U-D.  And the poster child for the very definition of irony (i.e., when the newbies play better than the veterans).

5.  Not a bitch as much as a genuine mystery to me:  how can our O-line open, frequently, gaping holes but not be able to convert a single 3rd and short? 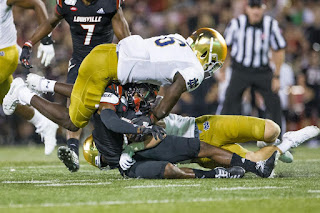 Now if he can only learn to tackle consistently, look out.

The kid just flies around.


7. It was the first game, everyone with the 'sky is falling' hot takes, relax.

Maintaining my practice of, um, curating from The Athletic  pay site, while at the same time pandering to my biggest audience (the 10 win horde), herewith this week's key question: 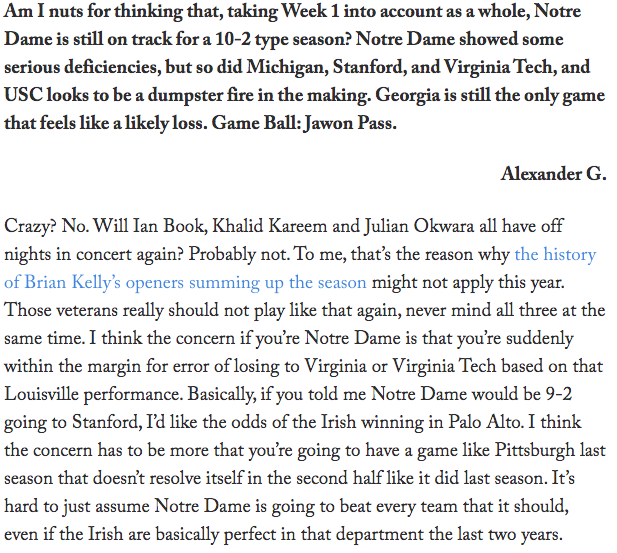 To be candid, I didn't see a whole lot last Monday night to elevate anyone to Buddy status.

* Kyle Hamilton?  Do it for more than a few plays.

* Tommy Tremble?  Nice start.  Do it for more than a couple receptions.

* Chase Claypool?  He will win this recognition. Just not this week.

* The O-line.  Do we need to re-visit the short yardage topic?

* Jon Doerer?  Just checking to see if you were paying attention.

So what to do then?  Simplify - and identify two winners: 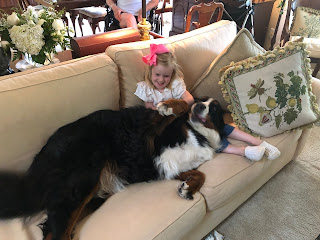 For excellence in tag-team partying - great grandma Mary Hesburgh's 85th birthday - while living the "moderation in everything, including moderation" mantra.

Demonstrating textbook 'west coast chill' they combine laid back style with an edgy "just understand what you're getting yourself in for, if you're gonna hang with us" attitude.

I wanna party with you two. 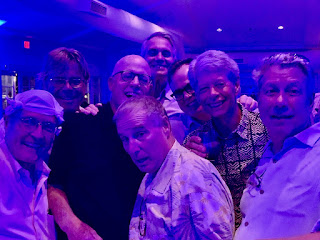 For excellence in, well, who really knows.

A motley group, to be sure. But they look like they're having a ton 'o fun - more than ND's football team - even if some of them don't look like they even know where they are.

But they do know where I live. And that counts for something in the judging.  Not that many of them could actually ever find it.

Okay, maybe the engineers.  But the napkin-wearing village idiot, not a chance in hell.

I'm sitting on the dock on the bay
Watching the tide roll away...


Truth be told, I was in that aforementioned Nice bistro when this song actually did come on the speaker system.  But it got me to thinking about a few days prior.  We had a layover in Stockholm and with some time to kill, I took my bride to one of my favorite museums, the Vasa Museet, which houses one of the more ironic stories in history.  To wit:

It's 1624 and Sweden is at war with... Poland (legend has it a misunderstanding over a proprietary pierogi receipe started it all which years later, everyone had a good laugh over) .  Nonetheless, a very fired up King Gustav Olaf Something or Other commissions The Mother of All Battleships to be built to show the Poles he takes his dumplings deadly seriously.

Two years later and voila, the Vasa is ready to go. So with much fanfare, it sets sail on its ceremonial maiden voyage.


20 minutes, or 1000 meters, later - depending on your preferred metric, a strong wind rolls across the Stockholm harbor and BLOWS THE SHIP OVER.  Boom.

Interesting side note:  The king was actually out of town for the inaugural and heads did not roll over the disaster as he understood his role in pushing for an overly aggressive delivery timetable.  Which is probably only the first and most obvious difference between him and the typical Notre Dame supporter.

At any rate, the ship remained there, perfectly preserved in the briny saline of the bay's waters until 1956 when it was dredged to shore via some ingenious cables that were positioned underneath it.   At which point, I imagine the conversation went something like this: 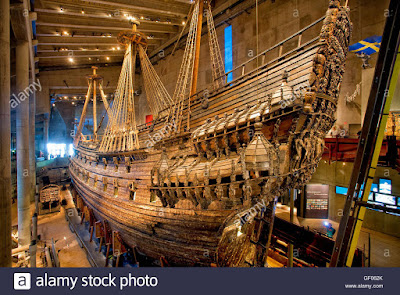 "Beats the shit outta me.  I say we just build a house around it and get the hell outta Dodge..."


Moral of the Story:

1)  Think twice before letting the Dutch design anything, much less your battleships.

2)  Too narrow + too tall + too top heavy is never a winning combination, except possibly for Scandinavian super-models.

3)  There's really no such thing as a sure thing.

One game down, 11 to go.  And everyone's still alive in the pool.

1.  Stanford.   Candidly,  position#1 was always going to be held by the loser of the USC -Stanford game.  And while the heart always tells me to cheer for a Trojan humiliation, the brain says it's more in ND's best interests to see Stanford's program decline, if only for recruiting purposes.  And so, huzzah!

2.  Texas.   Like ND, one of those iconic, legacy football franchises desperate to reclaim past glory.  But I don't care how much money your boosters have, no jumping the queue - we Irish are first in line to get back to elite status.   Wait your turn. We'll call you when you're table is ready.


3.  Tennessee.  There's no rational reason for why I should take any satisfaction in UT losing - what did they ever do to me, I kind alike Rocky Top okay there is the garish orange that represents a fashion crime in any society.

And yet, here we are.  The Tao of Jerrence, Mr. Schadenfreude.

4.  Michigan.  Of course they didn't actually lose but isn't being taken to double OT by Army (were Glenn Davis and Doc Blanchard playing?) tantamount to a loss?

The predictive nature of troll hunting is never easy.

On the one hand, we see the garden variety tool every day - like the masses of self absorbed backpackers I see on the El every day.  Your grim day of reckoning is coming. (Note to self:  put garden shears, with backpack strap-sliceable blades, on early Christmas List.)

1. Lynn Swann .    Lynn, We Hardly Knew Ye.   We also wondered why it took so long for the school to show ye the door.

2. Antonio Brown.   If you're only tangentially interested (or even aware) of the NFL, you know the league's poster child for narcissism has dominated the news for the past month.  Giving yourself frostbite by cryogenically freezing your feet was cute, the tantrum over the helmet was stupid and now we have the allegation of sexual assault.  Ick.

Talk about hitting the tool trifecta.

And Brown v. Belichick -  the world waits to see how long it takes one to test the other. 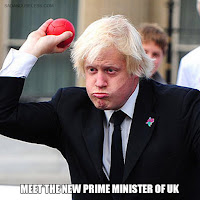 3. Boris Johnson.   Not a good week for the UK's poor man Gary Busey.

When one's party defects on you, the prime minister, that's not a particularly good look.  But when also you're own brother bails, you know you've hit rock bottom.

But chin up. The philosopher Annie says, "Tomorrow! Tomorrow! The sun'll come out tomorrow!"

In the meantime, would it kill you to stick a comb in your hair once in a while?

Congrats again, Ryan Corrigan, on conquering Europe, showing the French who's the boss and telling the IRONMAN 70.3 gods, "not today!"  when you're  biking up the Col de Vence.

Then there's being responsible for our final restaurant choice (Le Plongeoir, if anyone is interested) - best branzino I've ever had in my life.