Week 2: Another Ho-Hum Day In Paradise


Make that seven tickets to Paradise...

A bit of family background / context for this week's post:  For the past several years, the Corrigan boys (ND Class of '71, '73, '74 and '79 which by the way, in 2019 tuition & board money would be a cool $1M investment but who's counting, certainly not Kay Corrigan who forked out, collectively, ~ $70k for all that education - but more on her later)... try to identify a home football game to get together.

With 3/4 of the sons living on the two coasts, we don't always pull off getting everyone together (missed you this year, Kev!) but we give it our best shot.

Ostensibly a family reunion, in fact, it's more an annual weekend to clarify, nay re-establish, the family food chain which Jerrence, being the youngest, is the equivalent of a paramecium.

Or road kill, if one aspires to a more evolved analogy.

Sons and daughters have traditionally also been invited, under the philosophy that watching one's father get repeatedly verbally eviscerated represents, apparently, a teachable moment.

This time was different, however.  Mom was coming too.  She's made it in the past but at 94, her interest in making an entire day of it has definitely begun to wane. Had to make this trip count.


Enter Cosimo de Medici Bob Rasmus, the Stayer boys and dare we say it - the football team - to make it a home run. 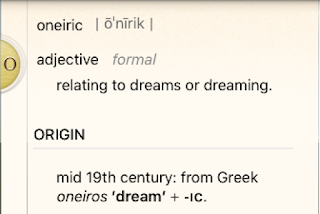 For Young Jerrence, the entire weekend seemed like one grand oneiric fantasy sequence.

First, there was the Thursday night Twin Anchors bacchanal: Then there was Friday night in Scotchlandia - High West whiskey starters, mom's family favorite chicken casserole with a nice Bordeaux... while older brother Mike, literary noir fanboy, peppers Jerrence with "Is Bryan Gruley gonna be there tomorrow?  I hope I hope I hope.  You know he has a new book coming out..."

And of course, the Saturday tailgate where even though it's only 11:30am (CDT), Jerrence's mom proffers that she might 'go for a splash of white wine.'  Okay then, let's get this party started.


And finally, game time and the magnificence of The 1842 Club.

By the 2nd half, with the game safely in hand, Dr. Tím Tím - the family headcase when it comes to ND football viewing - is uncharacteristically relaxed, perhaps heavily sedated, having been enjoying both the club's bourbon as well as the game's 50 pt. differential.

By the 3rd visit to his seat from the accommodating waitress ("Bulleit rocks again, sir?), he is offering to help her son get into Penn.

Kay stands at rapt attention during the playing of the Alma Mater.

On the way home, the brothers listen to USC choke against BYU. 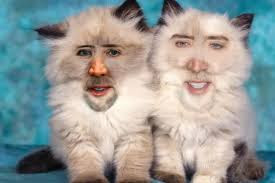 "It was a beautiful and peaceful experience."

Nicolas Cage
On doing 'shrooms with his cat, Lewis


The same could be said for watching the last three quarters of ND's game last week.

Re Nic's hallucinogenic experience, word has it he thought Lewis was his brother.  But of course. Sure, why not?  I mean, tripping or not, who amongst us hasn't seen a family member in one of their pets?

Ironically, we considered naming one of our cats... the mildly deranged one... Dr. Tím Tím.  But then we put the tequila away.

Game Observations
It's all I can do
To keep waiting for you...


...waiting for you, indeed.  I'm looking at you, ND running game.   Some other fast thoughts:

1.  Two wins by a combined 70 points.  So why don't I feel more optimistic about this team. (As friend and confidant Jay Flaherty opined, "the least impressive 50 point victory I've ever seen.) 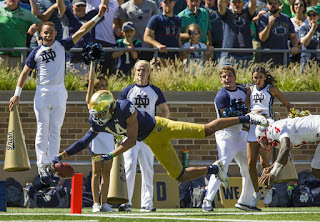 3.  If the running game is suspect, look at our run defense!  Eek.

To that former point, I'm putting the non-Book rushing yards over/under at 75 for the UGA game. 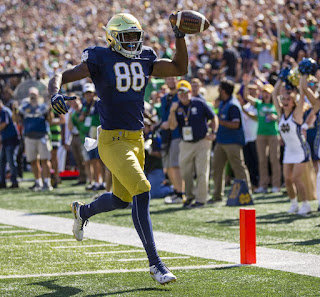 5.  Raise your hand if you were happy for Javon McKinley.  Here's a guy who came in with a lot of buzz, and as recently as the Spring, looked like he was gonna get bounced off the team.  Now, he's looking like their #2 WR.  (And boy, do they need it.)

6.  NBC extolled the praises of Ismar Bilal but I'm still not seeing it.

7.  Unusual that we actually had to discuss the ethics of running up the score.

Small point but rather than give the 2nd string kicker some opportunities, I would've wanted to see Doerer have as many FG reps as possible.  We're gonna need him flame tempered.

Forgive me for going full pessimist re the Georgia game - this was my one expected loss in my 11 win prediction - but I found the following Q&A both relevant and strangely comforting:

One of the things I'm sure everyone has noticed over the millennia of watching sporting events, at virtually any level (professional, college, high school) is that when the athletes get on TV... usually in a sideline shot... they're waving / thanking / acknowledging their mothers.


Well maybe it's because they're the ones in most families that do the tough, heavy lifting when it comes to parenting.
Take Kay Corrigan, for example:


So for anyone with Family Social Services ties, it probably bears empahsizing that those were different times.


And with this past weekend probably being Kay Corrigan's last trip to an ND football game...

...here's to all of the Stayer Lot tailgaters' mothers (both alive and those who've passed)

Four sons, 70 years of parenting and, if one doesn't count visits to the ND Dean of Students office, no jail time.

I'd call that a major accomplishment.

And a sincere, overwhelming thanks to Our Man Raz, who played benefactor Cosimo de Medici for the Corrigans this past weekend and made mom's last trip so memorable.

That you also made the prospect of watching future ND games with the unwashed masses completely untenable for my brothers...

Well, that is merely icing on the cake.

Bob, you are the proverbial gift that keeps on giving.

Continuing with the family theme, it's no secret that the Corrigan matriarch enjoys her vodka.

That in her "octogenarian plus" years, she has become Little Miss "It's 5 O'Clock Somewhere"* has been something of a revelation for her sons.


Boy, did this book have it all:  knife fights, magic paintings, and (spoiler alert!) a dude who never ages.  Wilde wasn't just ahead of the cosmetic surgery boom here - he also pushed the envelope on homoeroticism, resulting in widespread censorship in later versions of the book.

Try getting your hands on the juicy early copies of Dorian and then gather a group of aging beauty queens (or simply aging queens), who'll be guaranteed to love our hedonistic youth serum.

Just keep them away from the expensive art.

Tear the mint, then place in the pitcher.  Add the lemonade concentrate and stir until thawed.  Pour in the vodka and 3 cups of cold water and stir.  Serve over ice, garnish with the cucumber wheels and remember:  age before beauty.

Let the good times roll
Let them knock you around...

1.  USC.   Recognizing that SC's already upset Utah (last night), the loss to BYU almost has even more value - demonstrating that the decision to fire Helton may not be as clear cut as everyone would like.  Good.  Like ND teams of old, they can play up - and down - to any opponent.

3.  Michigan State.  MSU used to be a team that one really had a hard time engendering any great emotion about, one way or the other.  Then came Little Giants and Dantonio The Smug.  And the overall amoral sleaze (and lack of ownership) to their football recruiting / gymnastics scandal.

I hope they lose every week.

"Variety is the spice of Life."

This week's nominees would certainly suggest as much, spanning sports and industry alike. 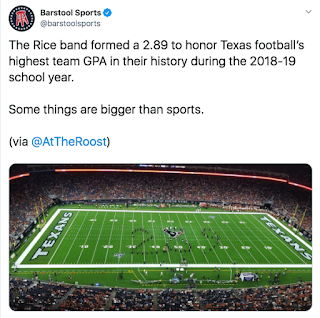 1. U of Texas / Tom Herman.    Granted, every school can't necessarily have Ivy League academic standards but UT is supposed to be a very good school. Perhaps you have to start somewhere but publicly celebrating a historically best 2.89 seems like leading with your chin.

2. Antonio Brown.   A bitter and envious smart ass might say it takes a lot to get kicked off the New England Patriots - typically murder and subsequent incarceration - but to do so in such breathtakingly short time and to have it so self-inflicted (which part of "don't harass your accuser in A GROUP TEXT didn't you grasp, Antonio?")... that is impressive. 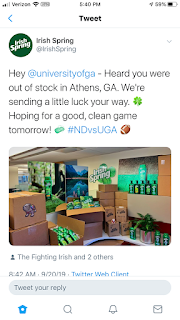 ...but the UGA college town's removal of Irish Spring soap in advance of the ND game - the brand's seizing of the marketing opportunity - is just fabulous.


4.  NBC Sports.  As loathe as I am to be accused of bandwagon jumping, I too, am not wild about the network's new camera angles for the home football games.

"If it ain't broke, don't fix it" seems to apply here. 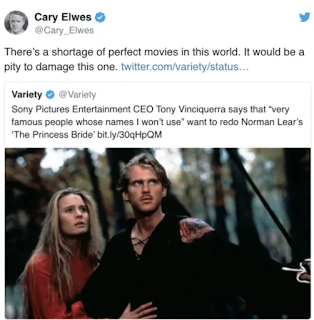 5.  Sony Pictures.  A recent Variety story about The Princess Bride producer Norman Lear's new deal with the studio introduced the hypothetical possibility of a re-make -  with the Sony Picture's CEO being quoted as saying, "very many famous people - I won't say who - want to re-do the movie..."

First of all, name them so we can shame them.

Don't even think about it.

Something in the night, just don't sit right
Looks like I'm gonna be up all night...

If one is curious as why Jerrence isn't feeling great about Saturday night's game, try this: 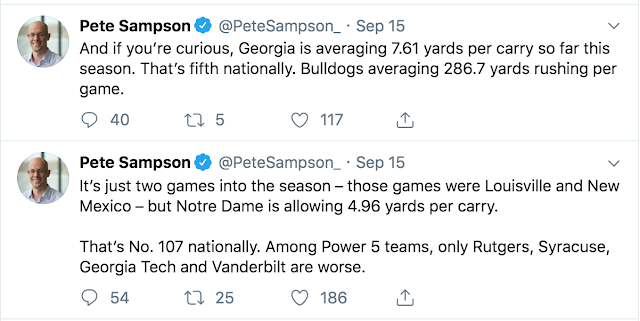