Sit tight and listen keenly
While I play for you a brand new musical biscuit...
Thank you, Lini & Blayney, for this week's musical inspiration!
Lini & Blayney.
Sounds like the perfect foils for a Fox network police procedural... two cops from unlikely, wildly disparate backgrounds (one of them whip smart, MIT-educated w an east coast, blueblood background while the other one, um, not any of those things)...  thrown together despite their mutual loathing for the way each conducts their business.
So when, inevitably, hi-jinx ensue as they come to bond over a weird, mutual affection for Hudepohl lager, they develop a similarly odd respect of their partner's unorthodox ways.
But I digress.
This line of thinking when Mr. REO Speedwagon dissed The Clash last week - imagine that - and thankfully Our Man Rice came to the rescue.  Unexpected.  Kinda like last week's game.
Word of The Week. 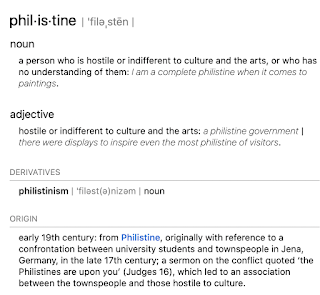 Used in a sentence paragraph:  As young Jerrence thought through the random, snarky criticism related to one of his musical choices last week, he thought back to something his older brother told him long ago:
"You're going to meet a lot of people in your life whose taste, frankly, is all in their mouths.  If you catch my drift."
Little Jerrence did.
"They're philistines.  Dolts.  Living a drab, colorless life in some vast, cultural wasteland...  nothing like the eclectic, intellectually stimulating eco-system that we enjoy here in Iowa."
Quote of the Week. 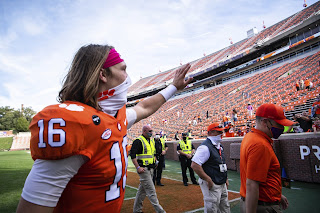 "He's got COVID?!  Soon he'll be faking his own death to avoid playing for the Jets..."
Twitter
Trevor Lawrence tests positive for COVID.  Perhaps counter-intuitively, this is not good news for ND Nation - November 7th now becoming a virtual no win scenario for the Irish:
In this 'the ends justify the means' world we live in, I'd normally opt for the 'bummer you can't play, Trevor' scenario but a) Clemson will probably find a way for him to play and b) I think we should want him to.  No excuses.
Game Observations.
Exactly what you are
Not what you want to be
I'll say, hey, well that's all right by me...
Who saw that performance coming after the Louisville game?  All right by me.
1.  Michael Mayer.  Okay, I guess the 5-star designations really do matter. 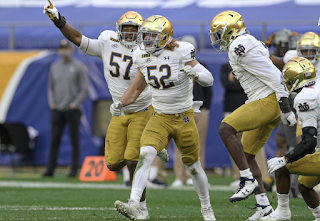 2.  O-line.  For otherwise racking up fairly pedestrian rushing numbers, know that the team went 4-for-4 in short yardage situations?  Why is that important (beyond the obvious)?  Because a) Pitt has one of the better D-lines in the country and b) overplaying the run is going to be the default strategy for opposing D-Coordinators until ND's passing game starts consistently burning defenses.
3.  Coach Lea. Enjoy him while it (he) lasts.  What could possibly get ND another year from him?  It won't be lack of interest.  But a) he'll look for fit and b) athletic dept. budgets are getting crushed this year - will there be the money to pay him?
4. New Feature:  Blame Brian!  (Kelly, not Ward or Gruley).  Understanding that in any game - even last week's - there's a solid percentage of the populace that need the coach to get hammered for something, no matter how minuscule the offense.
This week's offering:  why the hell did they have Lenzy out running deep shot plays when the game was well in hand?!  Allow The Athletic's Pete Sampson to respond:

Actions have consequences, right?  We may not like it - hindsight's always 20-20.
5.  Name of the Week
Pittsburgh WR    Shocky Jacques-Louis.
6.  On to Georgia Tech.  Trap game?  Normally, one would say hell yes!  During COVID, however, I'm gonna say 'no.'
Just too much on-going weirdness around the team that has to keep everyone focused.
There's mud in the water
Roach in the cellar
Bugs in the sugar
Mortgage on the home...
Like I said, a lot to keep one focused.
. 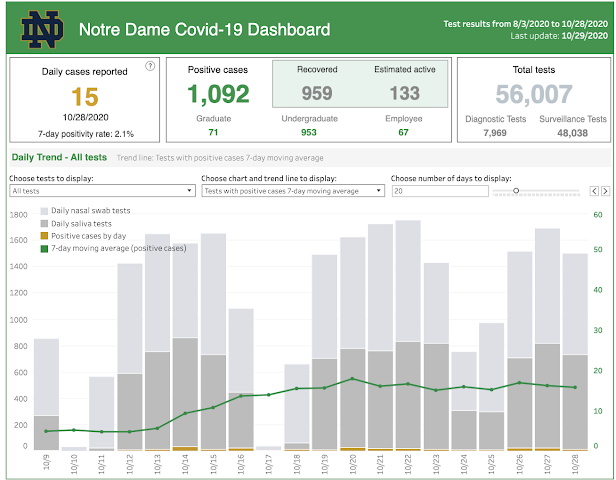 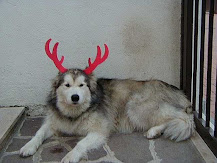 This week's choice seems pretty easy - and let us hope it is not another Javon McKinley tease.  Not to diss Mr. McKinley - I'm sure he's a fine person and an excellent teammate, it's just that consistency of pass receiving performance doesn't seem to be his calling card.
There would appear to be a far better chance that consistency might be Ben Skowronek's thing.  (Although staying healthy may not be). 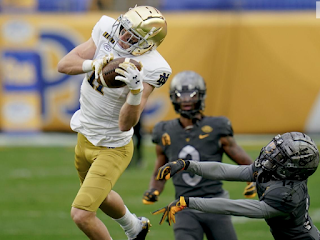 After all, he showed some skills (and some stats) while at Northwestern the past few years.  In last week's game, neither of his TD receptions were exactly walks in the park.  The kid is tall (6'3") and with a catch radius that screams "Ian, I'll make you and your numbers look way better than they should be."
We should all celebrate that.
Arguably, those two receptions (the latter a total prayer) were game 'tilters' (if not changers) at a time when Pitt hadn't yet completely imploded.
And for that reason, Ben, 'you da man' this week.
RE-PETE (a shameless, illegal lift of Pete Sampson's weekly ND mailbag).
Only because this seems to be on EVERYONE'S mind... 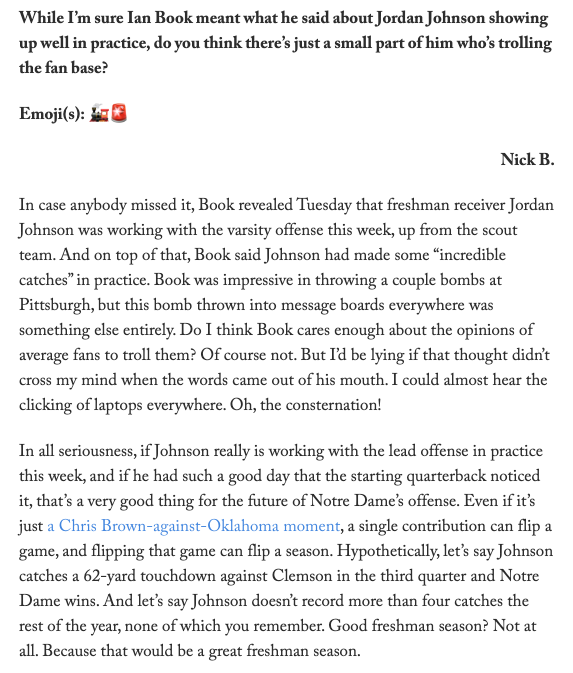 "I've been doing this all wrong..."
Somewhere in Cotuit, MA a young man is channeling his best Catskill stand up comic, exclaiming, "That's what she said..."
Ba boom ting! 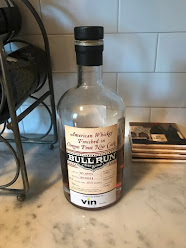 That never gets old.
But more to the point, I realized let the Game Day drink must drive the Blog's book-movie-cocktail selection - not the other way around!
Duh.
So last week, as Isaiah Foskey was scoring with time running out in the 1st half, the voice that I heard inside my head was shouting, "Fetch the whiskey!"
And who was I to argue.
The 7 & 7 Year Itch
The Seven Year Itch (1955)
Directed by Billy Wilder 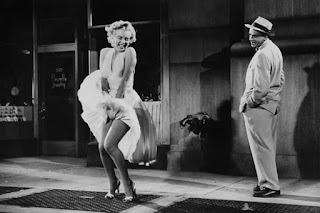 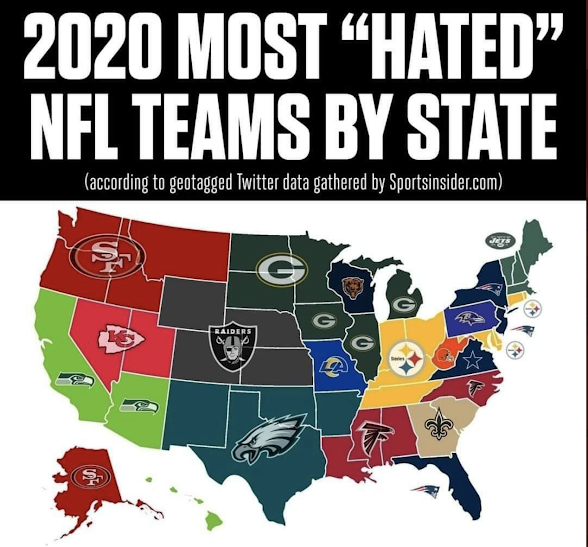 Where is Gabriel García Márquez when you need him?  If anyone would be equipped to write about human nature during an extended public health crisis, you'd think it be a Nobel Prize winning Mr. Love In The Time of Cholera...
Maybe a Pulitzer Prize winner would do  - Gruley?
At any rate, I'm beginning to wonder about how the pandemic is affecting everyone's minds - and the quality of their thinking.  Because there's some really shaky decision making going on: 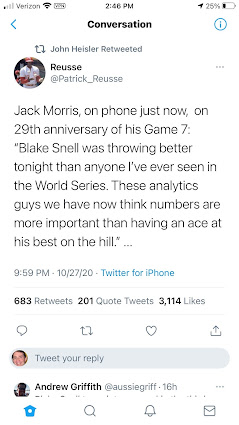 1) Kevin Cash.   First of all, what do I know about analytics, baseball or otherwise? Zippity-doo-dah.  (Hello, English major here.)  And as the years have passed - especially this one - I've become a baseball fan more on an episodic basis than one who is consistently committed.  That said, the World Series is a different story.  Intensity gets ratcheted up from Game 1, inning 1.
Which brings us to the 6th inning of Game 6 of this year and Cash's pulling of Blake Snell because, well, the analytics told him so.
I wish I had that excuse growing up.
"Why did you get kicked out of the high school dance for public intoxication, Terry?
Well, mom, if you bothered to pay attention to the analytics of when high school seniors meet Spring weather and graduation only weeks away, you'd clearly see the decision tree indicated getting drunk in the park with my friends beforehand had easily the highest potential for optimizing dance satisfaction.
It was the smart move."*
Well, 'smart' might not be the best word to call it.
*true story, except for the explanation.
2). Devyn Ford / Todd Gurley.  Both players had the opportunity to virtually ice a win for their teams in the closing minutes of games by not scoring.  Neither the Penn St. or the Atlanta Falcon RB could quite keep that level of instruction in their head.  (I'm going to give their coaches the benefit of the doubt that they made these players aware.)  Gurley's gaff was especially quizzical since he is a) a 6 yr. pro and b) he's executed this gambit correctly before!  Doh!
3) Justin Turner.    You had to see this coming... entitled professional athlete tests positive for COVID before a critical championship game, team wins the game and championship, COVID positive player who cannot quarantine for two fucking hours before running out because he needs to celebrate with his mates, including his cancer survivor manager.
What a collossal douche.  He couldn't even feel compelled to keep a mask on.
Justin, you are the poster child for the "I'm too selfish and undisciplined to grasp the concept of a greater good during a pandemic" attitude.  Bravo. 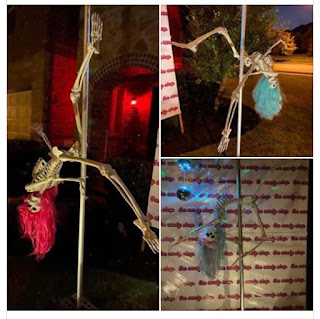 4) Texas.  As a state, you guys exhaust me.  You're all about "we're fun lovin', gun lovin' good ole boys" - but then your Home Owners Associations have to drop the hammer on some woman for having some faux naughty Halloween fun...
I mean, who doesn't enjoy skeletons pole dancing on the front lawn?  (Asking for a friend.)
Honestly, WTF.
Perhaps it just that you prefer your pole dancin' behind close doors because you're such a, you know, God fearing bunch.
Final Thoughts.
I can't you love me if you don't
You can't make your heart feel something it won't...
Whatever side of the aisle you swing from, vote.
Posted by Crash801 at 6:59 PM