Sometimes I wonder what I'm gonna go
Cause there ain't no cure for the summertime blues...

So Labor Day has come and passed.  And with it, symbolically if not meteorologically, Summer.  By now, Messrs. Cincotta & McGuire will have put away their party white's - though one suspects you'd have to pry their Nantucket Red-wear out of their cold, inebriated hands regardless of the season. 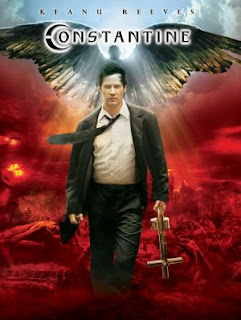 No matter.  It's football season!  So let's talk about golf.  Or more specifically, my relationship with golf - an avocation, over the past few years, with which I've gotten increasing engaged.

The irony of this step change in passion... occurring during one's AARP-eligible years... is not lost on me.

One could liken it to someone late in life, seeing an awesome Keanu Reeves movie about a guy who fights demonic forces in order to stop the unlocking of The Seven Seals and triggering The End of Days-- an outcome, if the religious texts are to be taken literally, will be delivered by A Pale Rider. 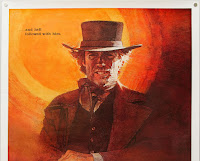 Probably not of the Clint Eastwood ilk.  Although it could be - my daughter tells me he holds considerable sway in Monterey which looks a lot like Heaven on Earth.

So it wouldn't be that big of a stretch to think they'd put him in charge of Apocalyptic Enforcement...

In this particular metaphor, I'm the wannabe bible studies novice who tells his world class biblical scholar pals, "hey, I think I'm gonna take a shot at unlocking that seven seals thing..."   And they acknowledge, politely, while in turn heading back to their favorite scholar pub, to laugh their asses off.

"Have fun unlocking the secrets of a millennium!"

At any rate, as I work through golf's 1st Seal, I'm reading watching and reading a lot about the game, including a recent article on Francesco Molinari and his British Open win.

There are many interesting Notre Dame football parallels involving overcoming the weight of history while competing head-to-head against several other prominent, if somewhat diminished, other programs (e.g., McIlroy and his poor recent history in majors, Spieth experiencing the worst year of his professional life and Woods experiencing the worst decade of his professional life).

Thus ND found itself Saturday night in more of a must win situation than maybe anyone cared to admit. 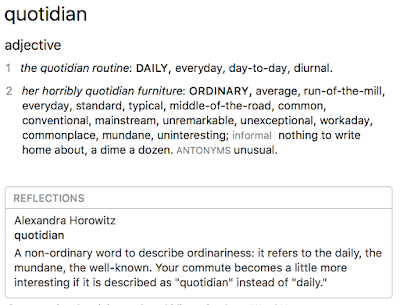 Used in a sentence:  As young Jerrence watched the latter stages of the 2nd half unfold, he couldn't help but be affected by how quotidian the football game had become.

What promised to be an epic grudge match between two rivals, the contest had devolved into a prime time showcase of two pedestrian coaching strategies - one intent on playing not to lose*, the other playing not to win.


*One understands why Kelly played it like he did.  UM showed no evidence of forcing him into having to take any risks to score. 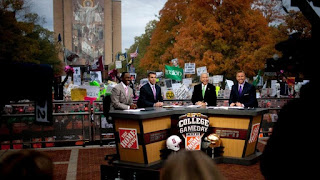 "An expert is somebody who is more than 50 miles from home, has no responsibility for implementing the advice he gives, and shows slides."

UM is gonna win easily, eh?  So much for anyone listening to the ESPN Game Day savants.

And I use that latter term very loosely, Desmond.


I say when it drops you're gonna feel it...


It's fair to say both coaches came into this game with a substantial amount of public (and partisan) pressure to win a big game.  One came out with a reprieve (I wouldn't exactly overstate the longterm benefits for Kelly just yet) while the other still has got the lunatics at the gate.

All in all an awesome weekend - in pictures...

1.  Let's get the only insight that matters out of the way quickly:  ND doesn't win without Wimbush.

Merely as a public service / friendly advice, coach: consider it.

It just might help minimize your otherwise completely unnerving similarity to Michael Douglas's "Falling Down" character.

3.  I gotta give Jonathan Doerer credit - it's not easy for a kicker to get the trifecta: 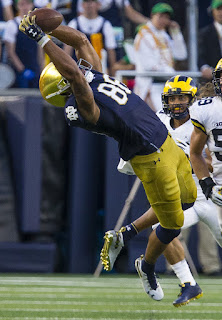 5.  That said, if Alize Mack doesn't catch another ball all season...

...and that could be closer to reality than one would like to believe...

He made it count.

6.  Let's give it up for Chris Finke and his 'nervous bird' TD celebration.   Putting that ND education to good use!

8.  They say strength up the middle is key.  If so,  ND should be in pretty good shape w. Tillery - Coney - and Gilman (who is The Real Deal).

9.  One more Wimbush comment:  cut him some slack for the 2nd half - our OT's were beaten like a drum.


10.  It's been a long time since ND put that much constant pressure on a QB.


11.  Who flipped out when Finke fair caught that ball?  NOT ME!  (I watched some of the Thursday night games.)

12. Did anyone else consider the humidity and silently hope it wouldn't affect ND's ability to hold onto the ball?  And while no one brought it up as an excuse, I couldn't help but wonder if UM's critical fail on the short 3rd Quarter FG attempt might've been influenced by that.

13.  Call me a softy but I liked at the end how many of the players on each side shook hands. 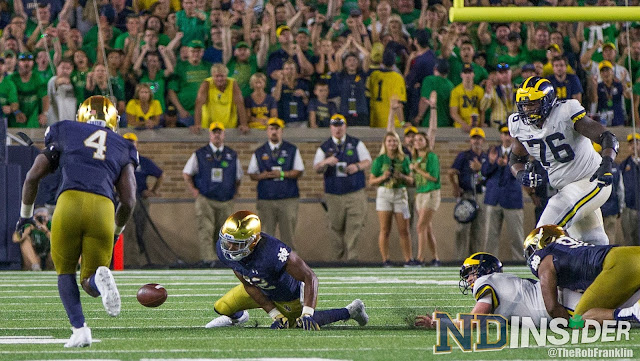 1.   Miami.  Nothing gave me greater joy to see the 'Canes run out of Jerry Jones World while LSU mocked their turnover chain with their own turnover towel.

Or as one social media contributor opined, perhaps 'The U' can repurpose their chain for ankle monitors.

2.   Florida State.  The Seminoles, however, would be a close 2nd.  Getting crushed late in the game, looking inept on offense for almost the entire 60 minutes and still yapping. 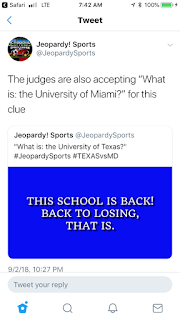 3.  Texas.   I have no real bone to pick with the Longhorns, other than to say that, much like the riff raff in Ann Arbor, they think they can throw money at the anointed "best young coach in all the land" and it's problem solved.

And that revelation, to an equally entitled fanbase, makes me happy.

Every year I have to re-visit the Tool Matrix, to make sure I've got my dependent variables correct.

As of today, at least one of the other end points would surely have to have something in the Insufferable Douche territory.


1.   Nick Saban.    The guy has every competitive advantage in the world, starting with seemingly non-existent academic requirements, a sophisticated bag man system and a shockingly healthy state fiscal condition that can pay him more money than any coach could be possibly be worth.

So what's the burr under his saddle?  A sideline reporter asking him, after a blow out win, the most predictable - dare I say quotidian - of questions ('who's your QB now') and he goes full Network-Peter Finch-mad-as-hell. 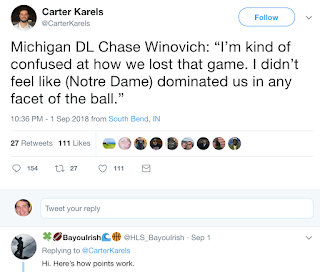 2.  Chase Winovich.  This is probably unfair - the kid played a pretty incredible game, having spent almost as much time in ND's backfield as Wimbush during the 2nd half - but the response to his quote (see sidebar) is perfect.

The guess here is he's not a math major.


3.  Braylon Edwards.  After publicly trashing his alma mater's effort vs. ND (and his subsequent suspension), he admits that he was excessively emotional and, um, inebriated.  Oops.

Which pretty much also describes my post-Packers viewing state for all of the '80s.

4.  ND Message Boarders.  This is why I don't post and why others shouldn't either, especially after a committed day of drinking.  Your team wins a hard fought rivalry game and someone starts a thread - I have no freaking idea why - on the state of ND helmets' paint and this is the response:

They looked too yellow.  That's your big contribution?  Hmmm.

So the next time one gets to thinking that ND doesn't have the pinheads that other schools do, please remember this.   Ours may not be of the sociopath variety that populate Columbus and SEC country but I think we can go toe-to-toe with anyone on basic, meat 'n potatoes totally-missed-the-plot, idiocy.

5.  UM Message Boarders.  Let's end on some fun. Who doesn't love a good troll of the opponent's message board after they lose.  Watching self-immolation is fun!  Here's a sample of the UM board on Sunday:

SHOCKING! We're losing a big game......AGAIN! We're making ND look like a NC contender and they are dominating this game! Can't say I'm surprised....for about 15 years now the M has stood for Mediocre.....HELLLLLLO MUSIC CITY BOWL!!!!!

[After their FG:] No shutout this year at least.

I don't have enough beer for this.

I can't believe we are making one of the worst QBs in the country look like Joe Montana.

Michigan, the Rutgers of Ann Arbor.

Did we prepare for this game...like...at all?

Sad to say but they are starting to resemble the Lions!

Right now, I'm afraid of being embarrassed by Western [Michigan] next week.

Soooo who's the next HC on the radar?
I say go for [Stoops] at Oklahoma. Just give him whatever he wants.

[Wonderful example of lowering one's expectations in stride:] I still think we can beat the unranked teams on our schedule and get a bowl bid.

[Describing the Michigan play-calling process:] Borges phoned the plays in to McElwain, who relayed them to Warriner, who wrote them down on a note card and had a runner walk them up to the booth to Pep. Pep subsequently called down to Harbaugh, who relayed them to the QB.

[In response to above:] We called plays on offense?

[And my personal favorite:] Whipped by a better team. And ND's coach wears real pants.

It turns out that my wife, the Pillar of Alcoholic Moderation, has something of a thing for tequila.

Her affection for margaritas having already been well established (just ask the city of Austin who, presumably, had to drop their tequila inventory forecasts after the ND-Texas game weekend a few years ago)...

Now she's discovered the Mexican Mule, the tequila-based companion to it's more popular sister, the Moscow Mule.  If last weekend is any indication, Valpo better start stocking up on its ginger beer and Patron.  So this week's cocktail's for you, Lisa Ann...

In the days before social media in the pre-Photoshopped world, aging stars would drift into the background of their own minds and never be heard from again.  These true life Hollywood horror stories fascinated auteur Billy Wilder, who offered an ultra-dark look at the ultra-sunny Sunset Boulevard - specifically the glamorous and gilded Beverly Hills block on which former film beauty Norma Desmond's mansion sits in decadent array.

When a downtrodden young screenwriter wanders up her driveway after escaping his own demons, Norma sees him as her chance at a comeback (even if he ends up seeing the bottom of the pool).

Descend the staircase for a poolside-worthy poison featuring a (Pinot) noir twist.

Pour the tequila over ice in a rocks glass and then add the orange juice.  Slowly add the Pinot Noir by pouring it over the back of a spoon (rested against the glass's rim), allowing the liquid to sink to the bottom of the glass. Finish by slowly adding the grenadine. 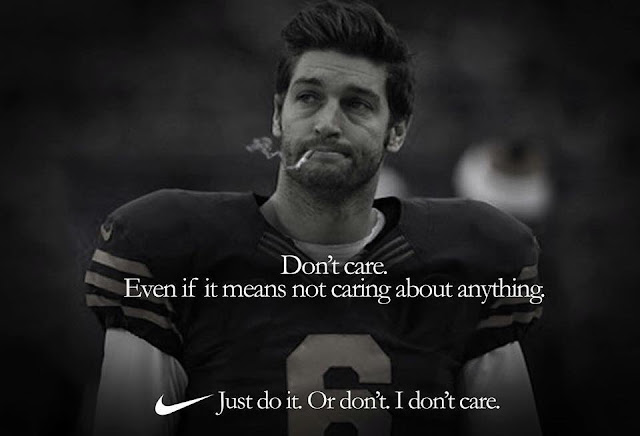 One can now freely mock the Bears because apparently they're going to the Super Bowl...
Posted by Crash801 at 6:16 PM