4th Quarter.  2:35 left.  “Cut it like a knife” tension is palpable and I… I am suddenly transported back in time to Spring, 1978.  North Dining Hall. The finals of Famous Deaths In Food where, as the title suggests, contestants recreate famous deaths through the medium of the dining hall’s ever changing food offering. And through the prelims, the competition definitely brought its ‘A’ game, - Jayne Mansfield, Marilyn Monroe, JFK but highlighted by:

After a solid prelim performance - recreating the cautionary myth, “Icarus” (a lemon sun, a couple leaves of iceberg lettuce, a bowl of water and a perfect 10 pt. splash from 2’ above) - it was no time for me to play it safe.  And so, with a SRO crowd including the Head of the Dining Hall (“this isn’t wasting your food, sir, this is… an homage”), much had been said, the time was now.

The finals were not without controversy (“wait a minute - Jonah never died in the Whale!”) but with focus maintained, I lead off with “David vs. Goliath” (mash potato giant, an army of green bean Philistines and a solitary pea finding its mark, tossed out of a straw’s paper sheath) and finished off with “The Lynching of Benito Mussolini” (powerful in its stark simplicity – think tea bag hanging noose and the plaintive cry of “Il Duce!  Il Duce!”).   Not perfect but victory was mine.

I am Mr. Famous Deaths.  The once and future king.

And so it was for the Irish Saturday night. Rising up to the moment. Meeting pressure head on. And on that crucial 3rd-and-4 pass to Tyler Eifert, I believe Kelly found his inner Benito.

Not a pretty game but since this is not Olympic gymnastics, style points don't really matter, do they?

Song of the Week
In tribute to the inaugural 'official' tailgater of the season, with a (nearly) complete quorum of the Spanish Armada of cars 'n hosts taking their usual places along Notre Dame Avenue sidewalk.  The breadth and depth of offering is, as always, spectacular.  Bonnie's sausage concoction makes the taste buds explode.  And Peter's specially treated vodka, while admittedly looking like human waste, makes the foundation for The World's Greatest Bloody Mary. Minutes later, okay maybe it was hours... who could tell... it was on to fried chicken, panini's, german sausages with possibly Grey Poupon... All the while getting reacquainted with my 2nd favorite UM fan, Paul (who apparently travels nowhere without at least six gallons of Long Island Ice Tea).

"And all the world is football-shaped
It's just for me to kick in space
And I can see, hear, smell, touch, taste
And I've got one, two, three, four, five
Senses working overtime
Trying to take this all in..."

It was, in a word, wonderful sensory overload.

They felt it was necessary to expurgate his letters before publishing them.
<the newspaper had to expurgate the expletive-laden speech that the criminal made upon being sentenced to life imprisonment> 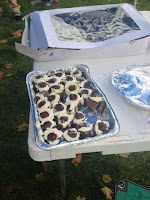 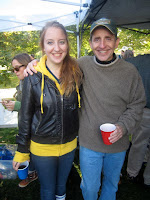 - Ted's engaged!  Woo hoo! This is gonna be a GREAT day.
- Irish Car Bomb desserts!  We now have the alcoholic dessert food group covered.
- Daughter Shea arrives with her UM fans... nice and seemingly normal until they start gravitating toward Cincotta.  Before long he is leading them in making human pyramids... oh boy.


Meanwhile, somewhere on the Seine...


If This Week's Game Were A Movie Poster, It'd Be... The Hunger Games

"The World Will Be Watching"

Irrespective of the lack of aesthetics to Saturday's performance, it probably can't be understated how important it was to win Saturday night's game. Prime time national audience, marquee rival opponent with a a guy who was Heisman trophy candidate just three weeks ago -  someone's who historically burned you in a variety of torturous ways.  Lose and you go back to poser status. Win and meaningful credibility is gained with both the media, peers and those 18 yr. old's whose favor you're still trying to get to bring their talents to South Beach Bend.

Recruiting
As most you know, the team was already at 20 commits - using the term extraordinarily loosely - before the game, with Michigan being probably the Big weekend this year.  Lots of kids on campus, committed and still looking, class of  '13 and '14.  Winning doesn't necessarily guarantee anything (hostesses do!)... But it sure doesn't hurt.


The number is now up to 21 with Torii Hunter's commitment and seemingly no more than 3-4 spots left.


* Before you say WTF, have you watched Turk punt? 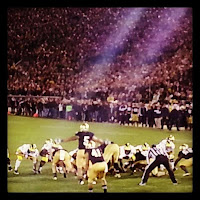 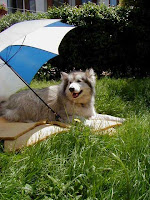 Let's just throw out the thought of any consideration for anyone on offense, okay?  Tommy steadied the ship, made a couple throws, showed he could hand off with the best of 'em... and without wholly discounting that contribution, no. This game was about the defense.  A case could be made for the secondary, what with all the timely INT's and fumble recoveries. And Danny Spond was a total revelation. But this game seemed to be showcased by one guy imposing his will...  seemingly being in the right place at the right time, repeatedly.  Plus there's the whole 'Angels in the Outfield' thing going on... Manti, there's no doubt Buddy's up there cheering you on with all your other loved ones. Even if he hasn't the slightest clue what's actually going on.

Tool Time
Occasionally, one gets asked the question of "Nature or Nuture" when it comes to tools.  Are they, in fact, tragically born that way or is there some triggering event that sent them down a darker, more irritating path?  This week, the evidence points to something genetic:

Lane Kiffin.  To quote Eddie Vedder, "born on 3rd base, thinks he hit a triple...", Laney has had an athletic career fast-tracked for him forever.  But it would appear the magnitude of the SC job (and the expectations) are getting to him. This week, a seemingly innocuous question regarding injury status lead him to run from his media update after 40 seconds!  You are the epitome of Poise and Professionalism.

Steve Spurrier.   Let's face it, you just know Steve was a d*** right out of the womb.  Probably captain and star of every sport he ever picked up, he's never been used to not getting his way.  As evidenced by his interpersonal skills with the media.  Whereas Lane is just deer-in-the-headlights inept, Steve is just a... douche.  Has a weekly Sunday morning teleconference, pastes Missouri and then decides after an opening statement to just. Hang. Up.  Alrighty then.  Maybe he was late for his tee time.

Golden Tate.   Proof that not all ND alums make you proud.  The Maple Donut Thief is the beneficiary of the worst blown call in a weekend of awful officiating - good for you, G-man - but in the resultant interview, when asked about his blatant push off, he answers, "Don't know what you're talking about."  Dude, the game's over. Man up.

Roger Goodell, NFL Owners.  Two words:  replacement refs.  Ugh. And then to have to watch smarmy Pete Carroll prance all over the field.  "Lisa, fetch the hot pokers for my eyes..."

Schadenfreude Winner.
Week 4 in college football... game start to get a little bit more interesting. Some more than others:

*FSU, who also did something nice this week in committing to honoring a scholarship for a recruit who suffered a career-ending injury.

Wager 2012.
Now's probably a good time to say that if your name is highlighted in yellow below, I've got you recorded as having paid this year's $25 wager fee. A lot of money was being handed me last weekend so if I missed anyone, give me a shout.

The fans of "Departed" territory are not looking good.  But, as always, eight games still to play. 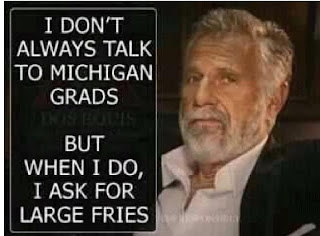 I apologize to my daughter and all her very cool, very nice UM friends.  But I cater to a decidedly lowbrow audience which leads me to do things of which I'm not always proud.

Plus I have 3 years of UM losses, totaling a cumulative :40 of clock left, that I'm still working through.

My therapist says this is good for me to get this out.