As many of you may have seen, scientists in Geneva announced this summer that they had found a new subatomic particle that they were 99.999999 percent sure was the elusive Higgs boson, nicknamed the God particle.

Although I have no earthly idea what that means (even though it was foretold by both the Mayan and Dan Brown in his wonderfully convoluted "Angels & Demons" novel / film), I am over-the-top excited. It gave me much to ponder:   how existence began, the structure of the universe, the difference between bosons and fermions...

But I digress.  About the Higgs boson: apparently it's the only manifestation of an invisible force field, a cosmic goo that permeates space and imbues elementary particles with mass. Raising many questions:
Song of the Week
Not so much football thematically correct as country aligned, call this week's choice represents both a link to last week's "Wind That Shakes The Barley" reference as well as a (tangential) homage to this week's opponent's sacrifice, who when they're not driving us mad with cut blocks and 8 minute drives, are putting their lives on the line in the name of our freedom.  Probably very few of you will recognize the name of Mary Black - I discovered her on our first tour of duty in London in the mid 90's - an Irish folk singer, who was (is) something of a national icon. Sadly her recognition never quite made it much beyond the North Sea.


"Above the narrow Belfast streets
An Irish sky looks down and weeps
At children's blood in gutters spilled
In dreams of freedom unfulfilled
As part of freedom's price to pay
My youngest son came home today..."

Word of the Week
Truth be told, my relationship with the concept of Maturity has been a historically promiscuous one.  Both consistently disappointed due to a shared lack of commitment to the other. For this reason, I love the word 'fecund'.  In equal parts, its use could get one labelled 'art house pretentious' or have your mouth washed out with soap by your mother.  It's also the perfect word when describing anything to do with Ireland, a country visually stunning - green fertility everywhere! - and intellectually, creatively powerful, the historical land of Beckett, Yeats, Joyce, Shaw, Synge, Wilde, et al.

Plus, the Irish love to throw around the f-bombs with such stunning frequency that one never knows whether they're being articulate or profane. So they've got that going for them as well.

Used in a sentence...  The fecund versatility of Chuck Martin's offense continually kept the Navy defense off balance.


Observations Of The Game 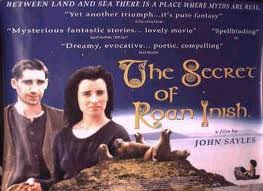 "Between Land and Sea, There Is A Place
Where Myths Are Real"


Maintaining this week's Irish theme, this charming John Sayles film demonstrates that in Ireland, the line between Reality and Mythical is indeed a blurry one.

What the movie doesn't tell us is what happens to The Magic outside of Eire... guess we'll find out this month.

Buddy of the Week
It's been two years since Buddy shuffled off this mortal coil... and since shuffling was Buddy's primary gear of motion, he would've been impressed with the overall speed of the team we saw on Saturday.

That characteristic unites a short-list of candidates for the Week 1 'Buddy' that includes Stephon Tuitt, Everett Golson and Manti Teo. All could be credibly argued for.  But this week's recognition gets shared by Theo Riddick and George Atkinson III.  "Cierre who?", you cry!  Over 200 yds. rushing between the two... showing speed, power and vision. And no turnovers. The help they provided Golson alone was huge but in reality they also took pressure off all the inexperienced WR's and gave the O-line a little relief in not having to sustain their blocks for quite as long.  Well done, gentlemen! 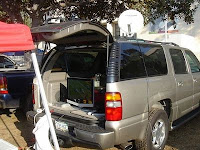 Cinema dell'Inferno
In prior exchanges of correspondence, it was suggested that should 2012 the football prospects go south in a hurry, alternative forms of entertainment (with which to have excuses to maintain the tailgaters) should be explored.  A film program was proposed.

Despite yesterday's success, that scenario is not out of the realm of possibility so I've taken the liberty of suggesting the seminar schedule:


In advance of this series, I'll be holding a Purdue halftime town hall debate on the following statement:

"DUI's have been responsible for deaths. The only things weed has killed are large pizzas..."

Denard Robinson.  For the record, I'm a big Denard fan, he of the tragic shoelace tieing disability and the dirigible passing style. But calling out Usain Bolt and saying you'd beat him in a 40 yd. dash... child, please.

NCAA. Not only did you completely whiff on properly closing the UNC academic scandal ('no rules were broken') but with the hint of a new USC payment scandal, does anyone have confidence you'll 'bring the pain' that Mark Emmert has been promising?  In a word, no.

On top of Pat Forde's thoughtful defense this week of Notre Dame's standards, as well of his reference to "future medium-security detainees" at other schools, it does prompt the question, 'what exactly does the future suggest at some of these programs?' and an idea for a neat new game!  One I call "Predict The Career Track..."

Now I've scrambled them up so don't be fooled... mix 'n match - any number of possibilities certainly exist. (Answers will be published in next week's issue!)


Schadenfreude Winner.
Inasmuch as Week 1 in college football is typically 'bring on the cupcakes', there isn't a lot to work with.  Be that as it may...

Wager 2012.
The collective prognostications would suggest a 2012 theme along the lines of "Mediocrity, Thy Name Is du Lac".   Of course, that label doesn't really do justice to a) the difficulty of the schedule (widely accepted as the toughest in the nation) and b) the relative youth of the team.  But this exercise is not about lame rationalization, it's about 'show me the money!'  Or a sliver of the $800 pot.


Final Thought
Coach Kelly, as you return to U.S. soil with one game and an impressive victory under your belt, now is not the time to play it safe.  Channel your inner Batman!  The Christopher Nolan / Christian Bale one, not the George Clooney / Val Kilmer version. 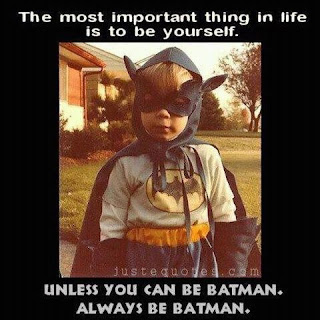