Not to brag and boast but according to Google Stats, this blog is very, very big in the Ukraine.  Kiev in particular. Which is not entirely surprising - in Bucharest I'm kinda a big deal.  I'm guessing its due to the frequent Dostoyevsky references, constant vodka-based cocktails I promote and of course, a mutual love of haiku.
But that's not why I bring it up. Many a time one will come across people with a singular skill or aptitude that you can tell they're completely unaware they even possess.  Apparently for me, it's beguiling Eastern Europeans.  For Notre Dame football, it's the ability to play exclusively to the level of their competition.  No wonder NBC loves them - every game is close, even when it shouldn't be.

That is not to suggest that I'm complaining this week.  A victory over USC, no matter how it comes about, is to be celebrated.  And if you live anywhere near southern California, said victory is also to be rubbed in the noses of their insufferable alumni.  (Hey, there's no law that says one has to be a gracious winner every week.)

An argument can be made that injuries play a critical role in our playing down to everyone.  Kelly said that we're now playing without 8 players in the original 2-deep, incl. four starters.  And one could make the case that Hendrix is the 4th string QB.  Yikes.  Football has become a total game of attrition and he who stays healthy, wins*.  Or perhaps more accurately, he who keeps their key players healthy, wins.

Watching Rees go down makes you appreciate that some axioms are actually true.

*with the notable exception of Jacksonville.

Text of the Week
Why does my ass pucker at kick off.

Who, exactly, are you watching the game with?

Song of The Week
The older I get, the more convinced I am that The Doors were one of the greatest bands ever.  And that had I been older during their heyday, I surely would've treated their music like a religion, deifying Jim Morrison and generally heading down a bad path involving a nomadic, peyote-based existence somewhere in the South West while calling myself The Lizard Child.

Go ahead, smirk. But I've made the pilgrimage to the Paris grave.  (And yes, I took a daughter with me - one never passes up a teachable moment.)

At any rate, the band was from Los Angeles, which seems geographically relevant this week.  And while I really don't have a clue as to what this song is about, I'm pretty sure it's got something to do with waiting. Which implies patience. Of which I have precious little but it would seem, have been finally rewarded for, at least as it relates to our Defense finally getting their act together.  Huzzah!


This is the strangest life I've ever known.

:  something too mind-destroyingly terrible to even mention

Used in a sentence:  After watching the 1st half and seeing how truly mediocre USC was, the prospect of ND's losing the game struck young Terry as utterly infandous.

Seamus: So Bud, Murph and I were watching "Hugo" on Saturday night after the game and I made the observation that the film was clearly the culmination of Scorsese's long-time reverence for French Cinema and Louis Malle in particular...

Murph:  That is sooo superficial. And it totally misses the more interesting homage - Marty's use of Sergei Eisenstein's cutting edge cinematic techniques involving movement and depth of field, most stunningly realized with the train sequence...

Buddy:  Um, boys.  The USC game.
Murphy:  Oh yeah. Right.  Quite the defensive struggle.
Buddy: That's being polite.  That was some ugly football.  But it was nice to see our Defense finally show up.
Seamus:  In particular, Mr. Tuitt.
Buddy:  He'd get my vote - he was a beast all evening, especially in the 4th Quarter. 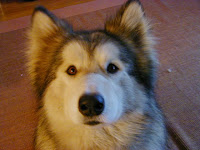 Murphy:  Let's not forget our newest wunderkind, Jaylon. The kid just gets better every game.
Buddy:  And let's also not minimize that had he stayed upright, Our Man Tommy was a contender. As much as it shocks me to say this, if he stays in the game we probably win by 14. 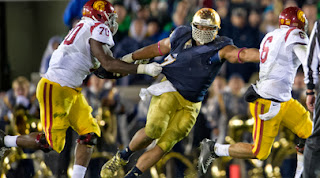 Seamus:  I still say Stephon should get the call tonight - and not just because Murph ridiculed my film analysis. The defensive line dominated almost all night and Tuitt was clearly at the forefront. 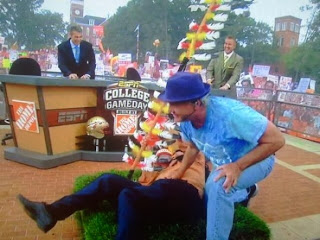 9:30am.  I turn on ESPN 'Game Day' and see guest predictor Bill Murray body slamming an profoundly confused and near wholly incoherent Lee Corso. Brilliant!  (I wonder, if Corso were to suffer a head injury, would anyone be able to tell?)

Nonetheless, I don't know the context - it's clearly a joke - but I take Corso's lying on the ground, getting pummeled as a good sign. Serves him right - he picked SC.  (Murray picked ND.)

Dr. Bob!  A game viewing companion! And I don't have to watch this game out in the chilly night air.  How incredibly... civilized.

Team 10.  Let's not count our chickens yet...  especially with Tommy possibly down... but Saturday night was a pretty big hurdle to clear. If the D plays like this going forward, we might have a shot at Stanford being The Deciding Game.  Dare to dream. 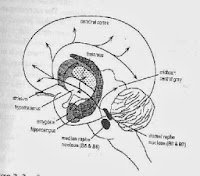 Shake the first four ingredients in an old-fashioned glass. Drink slowly. Suddenly remember you forgot to take the meds your psychiatrist friend prescribed for you.  Vaguely recall his warning about skipping dosages. Panic.

Find your prescription   What did he say about mixing alcohol and pharmaceuticals?  Was it something "awful" or "awesome"?  Oh well.  Too late.  It's not like things are going to get worse.


SCHADENFREUDE
One knew it was just a matter of time before all those close calls started going the other way. This weekend, nine ranked teams go down - the motherlode!

1.  Michigan.  I know I disappoint you, Shea, with this choice. And it was two weekends ago - practically ancient history.  But I can't help it - UM has skated by at least two other times (incl. this week) and they deserved to be called out.  And I'm still miffed that your players all seem to play the game of their lives against us, then come crashing back to earth vs. the Akrons of the world. You deserved the Penn St. loss.  And in my heart, I did rejoice.  Sorry.

2.  The State of South Carolina.  Talk about humiliation - one team loses to a school whose athletes actually go to class and the other one, ranked #3 in the country, gets 51 hung on 'em.  Ouch. Well at least you still have your crazy militias to plan the big Confederate comeback.

3.  Southern California, the geography.  Both USC and UCLA go down this week in games that were both to measure where the programs are at. Now we know. HAHAHAHAHAHAHAHA.

4.  LSU.  Call me predictable but watching Les Miles explain how he blew the game with awful late game management never gets old.

With the bye week another solid opportunity to stockpile idiots, starting with the most vocal of them...
1. Jim Irsay.  Proving once again that rich and stupid aren't mutually exclusive concepts. Most of you know I'm not an especially ardent Peyton Manning fan... think he spent much of his early career whining and pointing the finger at others when things didn't work out.  But the guy made the Indianapolis Colts. And you, Jim, a ton of money.
2.  49'er fans.   Arizona Cardinal DL Calais Campbell lies motionless on the San Francisco turf after a horrific collision.  Time for a stadium audience to collectively gasp and hope they haven't just witnessed a man get paralyzed.  But in SF, not so much.  It's let's do The Wave time!  I'm not sure what's worse - the complete insensitivity to a potentially catastrophic injury or the choice of doing a ritual that should've been retired last century.

3.  Houston Texan fans, again. Remember Matt Schaub? Starting QB suffering thru a nightmare year. Just when one thinks it can't get worse for him, it does - he gets hurt. And how do the Texan fans react? They cheer.  As one teammate aptly described it, barbaric.

On a related note, did you know that after the 2012 election, over 100,000 people signed a petition for Texas to secede from the USA? (And that doesn't even include my write-in vote.)  Interestingly at the same time, voters in Austin also announced their petition to secede from Texas.  With this as my inspiration, I'm declaring that hence forward, the 11 acres formerly known as Corrinella Farms is seceding from Indiana and will be officially known as... Scotchlandia.  Our Office of Tourism is now open.

4.  Cierre Wood.  Less than 1700 guys get to play in the NFL each year.  You were one of them.  'Were' being the operative word since you couldn't be more discreet with your ganja love.  Sad.

"The church is close but the road is icy.     The tavern
'A' Lot is far but I will walk carefully."
Russian proverb 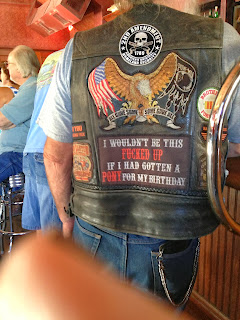 Did we mention that Scotchlandia has horses?

This being USC Week, it felt only fitting to offer a counter balance - something sunnier, more optimistic and (it goes without saying) shallower.  In other words, "Senior Class Trip."

I'd like to say I recall much of this adventure but I don't.  My lasting memories mostly involve daily breakfast meetings with university management, inquiring as to who...