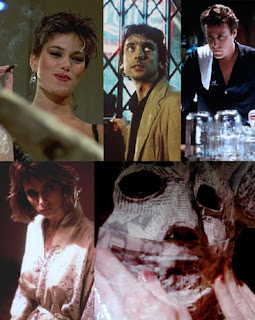 Anyone not named Corrigan, Perez or Rasmus with their hand up?

No matter.  To briefly summarize, it's the exceedingly funny tale of a lonely computer programmer's hellish night in Soho after he meets a girl in a coffee shop and agrees to see her later.

Suffice to say, the subsequent rendezvous does not go to Plan as he stumbles from one strange interaction to another, unfortunate mistaken identities and bizarre coincidences abound as he attempts to make his way back to Mid-town.

At one point, chased by an angry mob he witnesses a murder through a window and exasperated, says, "Oh great.  I'll probably get blamed for that..."

That, in a nutshell, now describes the Brian Kelly Experience at ND.  And after witnessing Saturday afternoon's game, I've now come to the clear and unassailable conclusion of 'Why not? Let's blame Brian Kelly is the reason for All That's Bad. In The World.'    To wit,

1.  The Iran Nuclear Treaty - totally has his liberal Massachusetts fingerprints all over it.


2.  The Georgia chick who won just Miss America after calling Tom Brady a cheater -  a Kelly plant; you know he wants Belichik's job.

3.  Greece's economic implosion - hint: he's Irish only on his father's side.

4.  Nicolas Cage's increasingly poor career choices.  Who do you think advised him that "Ghost Rider" was going to be the next Jason Bourne franchise?

And, of course, the snake bit state of our football program?  All of the injuries are his fault.  Every single one.  Ever.  Including Jordie Nelson's, dammit. 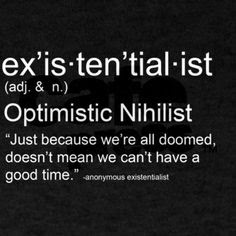 What was he thinking, running his RB?  Running his running QB?  Throwing to his TE and making him run?

So if we're aligned with this, Kelly = Doom, as our point of departure, we may proceed.

Except for the 'A' Lot tailgates.

Those are all that's good and right and just in the world.

"So they paid you to scream - but it buried your dreams.
So you wait for the pain that will send you to sleep again.
Now you walk with your wolves like you got nothing to lose
Act like you don't care while you wait for your cross to bear..." 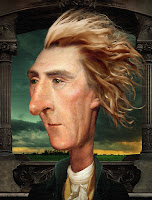 "I hold it that a little rebellion now and then is a good thing, and as necessary in the political world as storms in the physical."

Dateline: Richmond, VA.  Former capital of the Confederacy.  The air is redolent with anarchy.

What does that even mean, the engineers - except for Lindon - ask.  It means if I run into a Daughter of the Confederacy, I'm signing up.  I'm here and I'm into it.  Plus, I've always like their uniforms.

Friday night dinner w daughter Ryan.  Brother Tim tells me that the town is an under-rated foodie mecca and he doesn't disappoint.  One week after hearing tales of Elvis's go-to meal, the peanut butter and banana sandwich with two Crispy Creme donuts as the bread, deep-fried, I am inspired when what should appear on the restaurant's menu but  Doughnut Burger.


"Sweet meets savory," says our waiter.  I tell him, "You had me at 'how's your cholesterol?'"

Saturday. Early rain but we don't care.  The campus is a pleasant walk.  Lots of trees, a pleasant breakfast diner and ultimately, a bar.  The stadium is nice with, dare I say, a Jumbotron.  Mr. Jefferson's School is nothing if not progressive.  This is gonna be fun. 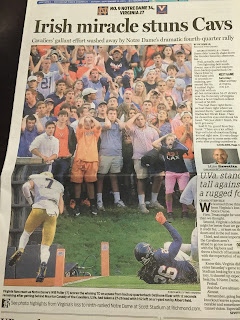 Um, perhaps not entirely.  Without the benefit of seeing any game tape, here's what struck me, all of which I lay totally at Kelly's feet:

:  a large vigorous mackerel (Acanthocybium solandri) that is common in warm seas and esteemed as a food and sport fish

interjection
chiefly West
:  used to express exuberance or enthusiasm or to attract attention

Used In A Sentence:  Young Terrence, despite his enduring love of All Things Ironic, resisted the urge to shout "WAHOO!!!" when Will Fuller scored his winning touchdown.

Even by his admittedly low standards, that would've been cruel.

Earlier in the week, when I presupposed a tough but relatively  easy, pull-away-in-the-2nd-half type game, I already knew who Buddy's buddy was gonna be, Roberta Vinci.


First, she's Italian - what's not to be impressed with that?


Second, she scored the upset of the year decade millennium by beating a woman in a man's body.  (Somewhere Renee Richards is shaking his / her head.)

Third, she was shockingly honest about her going-in expectations, or lack thereof, in her post match interview.  Again, what's not to like?

But no.  Given the way the game turned out, this week's recognition must go to C.J. Prosise.  First, he's playing in front of basically a home crowd in his second game as a RB - and his first as The Main Option. 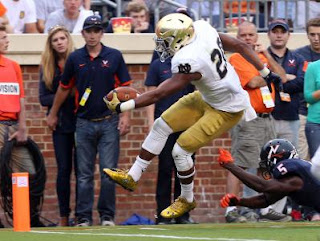 Which he then became ND's Mainest Option after Malik went down.  What did he do?  Give me the damn ball and get out of the way, I'm scoring.  (Nice blocking, incidentally, since he didn't get touched until the goal line on that play.)

Interesting fun fact:  Prosise's high school, Woodberry Forest, has a student enrollment of less than 400 and they had five guys on the field Saturday. Nice grouping.

(Will Fuller, you're a close second but I have a sneaking suspicion that you're gonna have more chances.)


As an aside, there's better versions available of this song but seeing Social Distortion's Mike Ness and The Boss do this song is very cool.

1.  SEC.   Arkansas.  Tennessee.  Auburn (beating Jacksonville State in OT?).  Missouri (beating Arkansas St. by a touchdown?) So much for your We're The Kings of the World attitude.

2.  Oregon.  At this point - and for ND, it may be extremely short-lived - but anyone highly ranked losing is worth celebrating.

3.  Eagles / Vikings.   Sorry, Philadelphians but if brakes needed to be tapped on anyone's hype, it's Chip Kelly.

After Week II, The Usual Suspects...

1.  Paul Johnson.  This week's opposing coach.   Much has been written of late about his apparent enmity toward Brian Van Gorder because he had the temerity to change his offensive scheme (from his beloved option) to something pro-style after BVG succeeded him as head coach at Georgia State.

Grow up, Paul.  And win or lose this Saturday, get over yourself.

2.  Bret Bielema.   Losing to... Toledo?  Really?  Here's some free advice, coach:  why don't you worry about your own schedule rather than obsess about all of the supposed non-SEC pretenders? 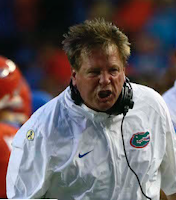 3.  Jim McIlwaine.  Heretofore, in the spectrum of serious anger management loss, there will be Bat Shit Crazy, Rat Shit Crazy and "Going Full McIlwaine."  Have a listen.  Yikes.


4.  Steve Patterson.   Texas' AD; no wait, check that ex-AD.  The same clown who refused to let ND out of their schedule in 2013 (due to the ACC schedule obligations), saying, "Hey, we've got a contract and we expect ND to live up to it. "  When bad things happen to bad people, I try to hide my glee.


4.   Eli Manning.    Normally I wouldn't care but blowing a game against the Cowboys.  Can't let that crime go unnoticed.

That was really, really stupid.

Desperation in the South - sounds about the right theme...

Gone With The Wine

When Margaret Mitchell proclaimed that Wind was a story of survival, she was likely referring to her heroine, Brian Kelly Scarlett O'Hara, who starts off a southern belle and ends up losing the hoop skirt to scavenge for food.

You'll call yourself a survivor too, when you get through a thousand-odd pages - which you'll have the time for if you abandon the ~ 35 hrs of ND football left in the year.

A Pulitzer Prize for the plucky Mitchell (hey, her 2nd marriage was to the best man at her first wedding), GWTW is an enduring moneymaker.  Gather a group, skip the football game movie, scour the book and cool off a boiling discussion with this sangria:  red as the earth on Tara and packed with proper southern peaches:

Makes about 6 drinks:
Pour the wine, brandy, sugar and fruits into a larger pitcher and stir.  Place the pitcher in the fridge an allow to infuse for at least an hour.  When guests need a break - you'll know because someone will refer to Ashley as a girl (that person did NOT read the book) - top the pitcher off with ginger ale and serve over ample ice. 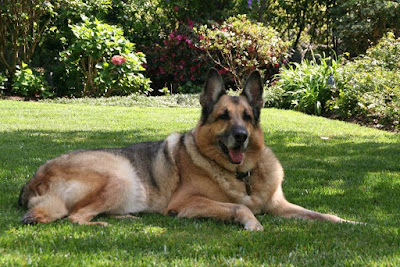 When one is 58 yrs old and your mother is a 90 yr old staunch Catholic, you hear... ad nauseam... many irritating platitudes throughout your life, like

"The Lord giveth and the Lord taketh away"

-  if that's indeed the case, could He free up His Saturday's and play free safety for us, then?

"God doesn't close a door that He also opens a window..."  (or something like that)

But occasionally - okay, like a lot of the time - she's correct.  And as we've followed the remarkable recent progress of baby Catherine Claire, we've had her future pal Murphy shuffle off this mortal coil.

RIP, Murph.  A life well lived.  Hope you're up there running around with Buddy.

If you perhaps aren't quite entirely in the ALL IS LOST mental space, how about this:


"And when you're back's against the wall,
Just turn around and you will see
I'll be there to catch your fall
So have a little faith in me
Between The Real and The Sublime
And give The Muses back their own..."