Week 4: Did NOT See That Coming

And I'm not talking about ND's uninspired play in the 1st half - I totally saw that comin'... No, I thought I was spending the weekend going to a football game when, in fact, a wedding broke out.

But more on that later.


The beauty of having an attention span of a pre-schooler, it makes decision making and prioritization a snap - what did I hear / see / read most recently?  In this fortuitous case, it happened to be seeing Lucinda Williams a couple nights before this week's game.

If we lived in a world without tears,
How would bruises find the face to lie upon?
How would scars find skin to etch themselves into?
How would broken find the bone?

Lucinda, the very picture of 'exactly-how-early-did-you-start-drinking-today' trailer trash, would seem an unlikely candidate to lead off a recap of a 62-27 outcome... but after one reads any of ND's message boards (note to self:  stop doing that), her songs' tragic worldview are not such an unlikely companion.  Clearly, ND Nation would go catatonic if they didn't have something to bemoan.

But it's a long season... miles to go before we sleep, as it were.  And carrying on the journey metaphor, I ran across this over the weekend. 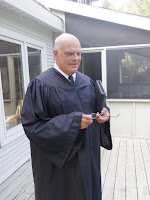 Old men, looking back on something iconic they unexpectedly created.

A metaphor for the ND football program or The Men From 'A' Lot.

I could also make another, perhaps unkind, comparison about other old men oddly dressed but that, too, is for later. 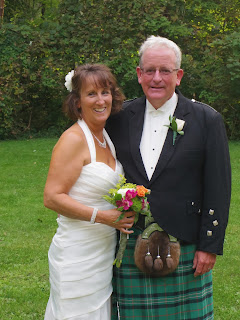 "The man who says his wife can't take a joke forgets that she took him..."


Congratulations, Brian and welcome to the "You've Tremendously Out-Kicked Your Coverage" marriage club.

This week's thoughts and they are few but pithy: 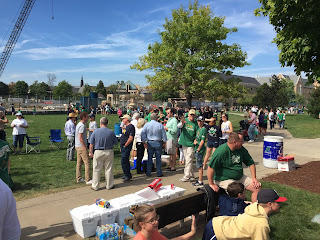 2.  Were people really that surprised by the 1st half letdown after last week's game?

5.  CJ continues to be a revelation at RB.  Please stay healthy.

7.  Amir had a really good game.  Just not as a returner.

8.  Awesome to see the 4th quarter being played by essentially our freshman team.

9.  Brandon Wimbush - yikes.  Keep it up and they'll be talking about you in Haile Selassie-like terms.   (Don't act like you don't know the former Emperor of Ethiopia.  Took on Mussolini, lost.  Took him on again, regained his country and ultimately for 4 million Rastafarians, for reasons not entirely explained by Wikipedia, was looked upon as a god, The Messiah.)  Embrace your destiny, young man.  Prediction:  a year from now he'll be no lower than #2 on the depth chart. 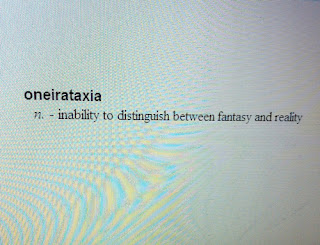 Used In A Sentence:  Every year when Young Terrence ventures to Union Pier to commune with the Alumni Hall gang, he seems to suffer an intense bout of oneirataxia.

The way they talk... the way they dress... the sheer amount of food they prepare...

These people... they cannot be real.

This game was a tough one to channel Buddy on... does one pick, yet again, Mr. Prosise who  looks more the stud each game?  A reasonable thought.  Too obvious.

How about Special Teams?  One could argue that Newsome's punt to the 1 yard line was one of the more defining plays of the game?  Nah.

Certainly the Defense makes it difficult to choose, even has their 2nd half seemed to be almost a mirror (good) image of the disappointing 1st.  But shall we reward inconsistency?  I think not.

Therefore let us go with The Big Uglies on the O-Line who, by the week, seem to look like that dominant force that wears defenses down and takes a world of pressure off a still-figuring-it-out QB.

You're the ones for me, the ones I really, really love.   Now, don't let us down this week.

1.  Oregon.   62-20, ouch.  You used to be the "It" team, the Mount McKinley Denali of PAC-12 football teams, with your look-at-me uniforms and a high profile corporate sponsor.

Now, you just seem to be the Mt. Baldy of the Northwest.

Is it not the mark of a civilized, ever evolving society but when we can look at ourselves and assign appropriate criticism?

1.  Don Criqui.  I know you're an ND Man.  Huzzah!  I also know you're 75 years old ('cause I looked it up on Wikipedia and that's never wrong).  But I'm dashing back to the house after the tailgate, in order to catch Quarters 2-4 on TV, listening to the IMG radio broadcast and you keep telling me our opponent is Temple!   Not once, mind you.  Repeatedly.  Shared college allegiance aside, Don, I don't think it's too much to ask to get the opposition's name correct. There's only two team names you have to remember - and one of them is always your alma mater. 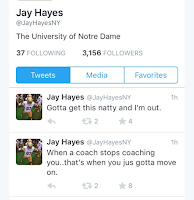 2.  Jay Hayes.   You're not playing.  I get it, you're frustrated.  But reaching out to the Twitter-sphere is never a good idea, especially when your coaches can monitor your social media .  Besides, if you didn't galumph around so much during practice, perhaps you'd play.

3.  Keivarae Russell.   What is it with college athletes and social media?!  Tweeting that Clemson's DeShawn Watson isn't a Top 5 QB ("though he's good...") before we've played them, not clever.  I that's called poking the bear.  And since you, K-Rus, haven't been playing like a Top 5 CB, one would really wish you'd just shut up.

4.  Will Fuller.  Then there's this.  I don't even know what it means.  Probably nothing.

But I do know Clemson will spin it for motivation, especially since they're not likely to Team Critical Thinking.  Dumb. And Unnecessary.

5.  Isaiah McKenzie.  Sophomore WR for Georgia, who qualifies this week as I think he might've been an ND commit at one point.  Oh yeah, he's alleged to have threatened to kill a woman!  No biggie.  In Athens, it's probably a term of endearment. REM made a song about it, after all - It's The End of Your World (And I Feel Fine.)

6.  Larry Brown.  I'm sorry, I can't resist.  No connection to ND (that I know of) but when one goes 3-for-3 in getting their schools placed on probation, that has to merit you some recognition in the Ethics-challenged Hall of Fame.

Hey!  Finally a book all most some of you will have read.  Probably. 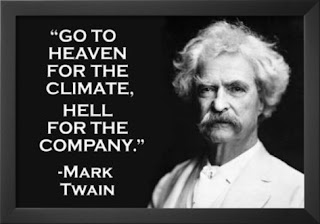 Conceived to exploit the success of the author's earlier, blatantly comic The Adventures of Tom Sawyer, Huck Finn emerged as a standalone classic. In folksy first person, Huck recounts riverboat escapades, narrow escapes and occasional cross-dressing (hey, that sounds like my first semester of sophomore year) set against a Mississippi River raging with racial strife.

Mark Twain - a pen name riff on safety measurements used for steamboats - intended the book as an excoriating critique of slavery but to this day it remains banned in some libraries across the country, with teachers and parents crying (irony alert!) racism.

Drink the tension away with a bittersweet tribute to Huck's pap, a daylight drunk who could've used a good education.
Muddle the blueberries in the bottom of a mason jar.  Add ice and pour in the vodka, filling to the top with the club soda.  Enjoy the sunset - and drink until full blown anomia sets in.

Turning To This Week's Game

Best article on ND's decision to stay independent that I've seen in while (here) that proves:

Also, a fast primer for those going to this week's game... some familiar shibboleths of the garden variety Clemson fan that one should be prepared for:

You're on your own to determine their meaning.

If you only saw one minute of football all weekend, with all due respect to Brandon Wimbush's debutante, it should've been the final minute literally of the TCU - Texas Tech game.  And if you think our defense is bad, these guys neither understand (or apparently care about) the concept of defense.

And while the notion that one of those teams is the 3rd best in the country is laughable, boy, is it fun to watch!  Wild, wild ending: