You ask me if there'll come a time
When I'll grow tired of you...

Ever wake up and realize you're in an unhealthy relationship?  "Only one?" you ask.  (Senior year of college would suggest otherwise.)

But that's how I felt watching the 1st half of last week's Syracuse game.  This is painful.  But I can't quit you, du Lac.

Although if you keep playing like this, I'm gonna give it my best shot. At minimum, our relationship is no longer monogamous.

Daughter Shea, at the time a very wee lass, once shared with me a confidence that The Lion King's young hero, Simba, "laughed in the face of danger." It was quite a thrilling insight for her to confide.  I naturally inquired as to what she would do under similar circumstances.

Her immediate and plainspoken response, "I would cry", was accompanied by an expression of pure astonishment - indicating her father's near total lack of common sense suddenly revealed just how much of a dim bulb she now understood him to be.

She could not have been more clear had she said, "I'm three years old, dumb ass, what do you think I'd do? What part of D-A-N-G-E-R don't you apparently grasp?" 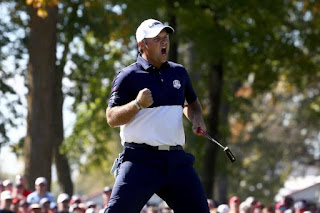 So embracing that sensible family "run away! run away!" attitude when danger (or in this case, profound angst) lurks in the form of an ND football game genuinely painful to watch, I turned the game off at halftime.

And turned The Ryder Cup on.

So the following insights, while not necessarily speaking to the apparent improvement the team showed in the 2nd half, underscore a certain world weariness to continually having to contemplate the same questions over and over:


* Why run wide on the goal line when you outweigh the side by 50 lbs?

*  Why does a chill run up one's spine when the announcer refers to Cole Luke as 'ND's best defender'?

*  Does anyone seriously think our O-line is anything better than average?

*  As one listened to the fairly blunt - and critical - announcers, did anyone not agree with them?


*  How depressing is it that Kelly seemingly has a completely different - and possibly more accurate - evaluation of the players than BVG did?

*  Are we returning to the Diaco 'bend but don't break' scheme where 500 yds. and FG's-not-TD's will be the objective? 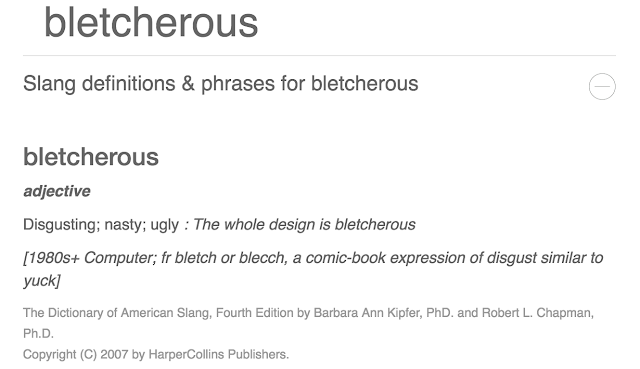 Used in a sentence:   With all eyes focused on Notre Dame's defense (or lack thereof), Young Jerrence was nonetheless far more vexed over the bletcherous performance of their offensive line.  Pass blocking a-ok, but they couldn't impose their will, running-wise, against a strong wind. 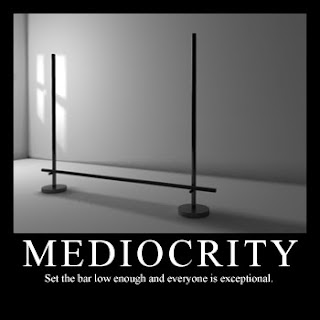 "The thing that binds us together is that we have both lowered our expectations of life."

Like I said, me and ND football - an increasingly unhealthy relationship.

The 3rd in a series of Public Service Announcements - mental health is not just genetic!  You, too, can take the proper steps to keep your mind 'right'.  If books and TV series are simply too time or labor intensive for you, how about a movie?  Here's a few to consider.


Films To Consider (beyond anything involving Werner Herzog)

1. Hell Or High Water.  Okay, full disclosure:  I haven't actually seen this film.   And it's already left the local cinemaplex - but those whom I respect tell me it's terrific, capturing pure desperation - there's an emotion ND Nation knows something about - in West Texas.  Captain Kirk vs. The Big Lebowski.  My guess is there's not a happy ending at the end of that rainbow so there must be something redeemable to the story.  Yet another rationalization Team Irish can identify with...

2. 20 Feet from Stardom.  Or as the esteemed Dr. Rasmus puts it in Notre Dame terms, "20 Feet from The Man ND Should Be Covering."  At any rate, a terrific documentary that shines the rare spotlight on some of the great back up singers of our generation.  Everyone knows the guys who stood in front - The Boss, Mick, Sting, Stevie Wonder, David Byrne.   No one knows the awesome chicks behind 'em.

Watch it and you'll find yourself saying, "its about damn time..."

3.  A History of Violence.   Humble, respected man in a small town who is ultimately found out to be not the man anyone thinks he is.  And with that revelation, things go from bad to worse.

Starring Viggo as BVG The Man With The Past and he's brilliant. But let's face it, he could be The Worst Man In The World (which he kinda might be in this film) and my wife would still be saying "yum, I'll take two scoops."  With Ed Harris and William Hurt is key supporting roles, great film.

4. What We Do In The Shadows.  On the significantly lighter side, call this "Spinal Tap Meets Dracula."   This 2014 indie mock-umentary follows a house of New Zealand vampires as they struggle with the mundane, day-to-day activities of the modern world, like doing the dishes and paying bills.  Not so dissimilar from, say, a college team's struggles with the mundane fundamentals of the game they play, like blocking and tackling.

Except unlike ND football, really funny.  Put this immediately on the top of your Netflix or Amazon Prime queue.


5.  Big Fish.  This one is for Dick Castellini.   Tim Burton's wonderfully visual (and equally fantastical) tale of a son's coming to terms with the Myth vs. Reality of his father's life has no parallel with ND football.

But it's got everything to do with any son's inevitable, after-the-fact epiphany of just how I-just-didn't-realize-how-impressive-dad-truly-was.

I know it did for me.  Clever, sweet (and by Burton standards) fairly accessible story, capped with Pearl Jam's perfect coda as the credits roll.

And the man of the hour is taking his final bow.
As the curtain comes down I feel this is just
Goodbye for now...

Next week - outdoor activities - preferably away from all cellular service.  (And with the Stanford debacle fast approaching, I strongly encourage you to consider these.)

Stanford.    Demonstrating just how far I've sunk, character-wise, the thrill I got out of watching David Shaw's team get absolutely steamrolled far exceeded any joy from ND's victory.

And this after finally accepting, with more than a little bit of envy, that both Shaw and Dantonio are very good coaches, their obvious personality flaws notwithstanding.

But fear not, I can sink lower. And will.


Florida State.  Welcome to our world, Jimbo.  One week you get humiliated by a team clearly your superior. The next week you play down to your opponent and get beat on a game ending 54 yd. field goal.   The Tallahassee PD can't get you out of this bind, can they? 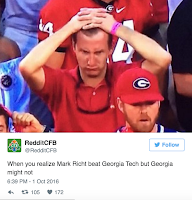 Georgia.   The thrill of victory with :10 left and the agony of defeat when the clock hit :00. Wow, in the most batshit crazy ending of maybe the year, that had to be an especially painful way to lose.

You're not in Kansas Tuscaloosa any more, Kirby.


Michigan State.  For those keeping score (and I kinda am), coach D, you haven't won since beating Notre Dame.

That shouldn't be any consolation for me, but it kinda is.

Every week I ponder "what if there is no bad behavior, no stupidity... no action that I can render swift and irrefutably damning judgment upon?"

But every week that internal dialogue ends with "Seriously? What were you thinking?  This is America.  Our access to resources in any capacity, especially poor judgment, are near limitless."

1. DJ LeMahieu / Walt Weiss.   In order to protect your league-leading batting average, your Colorado Rockies manager sits you.  Not just for the final day but four out of the last five games.

Did you argue with him, DJ?  Fight him about it? Trash the locker room over it?  I think not.  And look where Walt ended up, "pursuing other opportunities."

G-U-T-L-E-S-S.  Ted Williams surely is rolling over in his grave.


2. Justin Rose.   18 center-cut hole locations may have been "incredibly weak" and created a "pro-am feel" for you - but the PGA clearly wanted birdies, eagles and excitement for the home crowd.

Everyone was playing the same course - why does the set up matter?


3.  Odell Beckham Jr.   Every freaking day I have to wake up to someone talking about your latest psychotic break.  You're the Donald Trump of the NFL.  Zero impulse control = catnip for anyone in the media but for the rest of us, you're the poster child for Millennial self-absorption.

Now this week, you'll probably go for 200 yds. and 3 TD's against my Pack so I'll have to go another week hearing all about the tortured, paranoid athletic genius that is OBJ.  Yet another reason find you - what was Hillary's word? - deplorable.

Get help.  Or maybe take a page from Arnie and try humility.


4.  US Ryder Cup fans.  The PGA held a golf tournament and a football game broke out.   Personally, I kind of liked it - it seemed like it gave players the very rare permission to emote, be someone they're otherwise not allowed to be, and for some (Rory, Patrick) they fed off it.  And it was sensational theater.

That said, be careful what you ask for, PGA.  One heard more than once about drunken fans crossing the line last weekend.  It's okay if you attract a football crowd (well maybe not a Philadephia football crowd) but in two years don't be surprised if you're received by a UK soccer hooligan crowd.

Buddy was nothing if not an other-directed, charitable soul. The number of times I saw him befriend a small woodland creature...

Well, actually, never.  Self motivation not being a strong suit of his - but I knew he felt it in his heart a certain empathy for the picked upon, the 'no hopers', those thrust into impossible situations.

Can anything more accurately describe our new D-Coordinator pro tem?  A fellow, who, unless his defense turns into Alabama circa 2012, has likely no ND future whatsoever - no matter how much his head coach praises him.  So with that, Greg Hudson come on down!  You played kids that you probably barely even knew their names, who haven't even been in school for much more than a month and they responded.

Special recognition to both Patrick Reed and Phil Mickelson who provided me with the unfamiliar feeling of joy when watching them succeed.  (Normally, not a fan of either.)  And truly, their Sunday performances were nothing short of spectacular.

Watching those guys never give an inch for basically 4 hours was truly exhilarating.


Cocktail of The Month
Well it is that time of year - the changing of the seasons - where one inevitably catches a bit of a cold for reasons one has never quite fathomed.

How about some tea?

But you don't like tea.  Think it's a sissy drink.

How about if it's rum-infused?
I thought so. 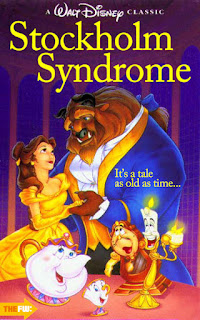 The first animated film ever nominated for Best Picture at the Academy Awards, this beauty proved that cartoons don't belong just to Saturday mornings - or to kids, for that matter. One of the crown jewels of Disney's decade-long animation renaissance (a hit-after-hit slate that included belting mermaids and wisecracking genies), Beast populated its castle with feisty feather dusters, crabby clocks and a tuneful teapot (as portrayed by Angela Lansbury, who legendarily nailed the title song in one tear-inducing take).

Be our guest and have a spot of tipsy tea topped with a petal:

Steep the tea and coconut in a teapot for 10 minutes, strain approximately 3 ounces into a teacup and set aside.  Pour the rum, coconut water, simple syrup and lemon juice into a shaker, and dry shake.  Add to the teacup and garnish with the hibiscus petal.  Just make sure to drink it before time runs out - or the water runs cold.

Don't be sad because it's over, smile because it happened.