And for once, we’re not in the middle of it.

“I say Lisa… lovey… since you're up… would you be a dear and freshen my cocktail?  Just a splash more. Thanks ever so much…”

But I’m getting ahead of myself.

First off happy holidays and New Year to everyone – hope you spent it, as I did, with those you love, relaxing while slipping in and out of food and alcohol-induced coma states…  there are many Christmas traditions that the Valparaiso Corrigans try to observe each year, starting with but not limited to, mainlining Black Russians and watching The Grinch That Stole Christmas… we are simple folk in NW Indiana.

At any rate, while lounging around in the aforementioned fog, I pondered  the lag time between final regular season games and the bowls… Both interesting and vexing, one never knows what attitude (or lack thereof) a team will bring. Especially when the game is pretty meaningless.  But everything’s relative, right? And here you had a game with two teams who went in very different directions over the course of the year.  Would ND treat this a valuable momentum builder?  Would Miami mail it in?  Who sees this game as important?

Word of the Week.
e•bul•lient [ih-buhl-yuh nt, ih-boo l-]
–adjective
1.  overflowing with fervor, enthusiasm, or excitement; high-spirited: The award winner was in an ebullient mood at the dinner in her honor.
2.  bubbling up like a boiling liquid.

After the game’s final outcome, how can we not be ebullient?  Already, the over / under on Castellini & Marcel’s win prediction for next year is 14. (Nowhere in the word’s definition is 'rational' implied.)

•  Great play calling. And Michael, Michael, Michael!!!  If this is your last game, well played young man!
•  Did you know the Rees spelled backward is seer?  As in “I'm a seer of Michael Floyd. And (apparently) only Michael Floyd.
•  Jacory Harris is a perfect 7-for-7!  Impressive. Unfortunately (for him) 3 of them went to ND… still his passes never hit the ground.

•  Harrison Smith’s 3rd INT - I know what he got for Christmas.

•  24-0.  I wish I could draw the ball like Ruffer does.
•  Props to the O-line… Rees has more than enough time.
•  I wonder what Michael Irvin is thinking saying right now.

Although they will ultimately come under somewhat deserved criticism, I liked our commentators, Verne & Gary.  For the past several years, I’ve watched with some perverse interest how Idiot ND Nation, apparently riddled with conspiracy theorists, perceive every announcer to have an anti-Irish agenda.  And while I too still harbor doubts about JFK’s assassination (Lee Harvey Oswald with a World War II Italian rifle from how far away… really?), I just don’t see the issue. 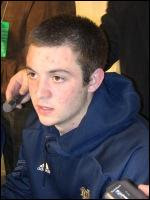 Plus, Danielson had one of the season’s great quotes about Rees:  “I swear he could've been one of the children in The Sound of Music…”

And thanks to the NFL postponing the Eagles-Vikings game on the 26th, I actually saw that movie recently – maybe Gary did too – and he has a point. 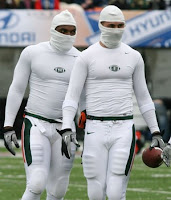 Speaking of Tommy, he gets lucky with several passes not being picked – lucky for him that Miami was more concerned with fighting off the cold (and looking like characters from South Park) than trying to catch the ball.  That said, Rees seems like Notre Dame’s version of Matt Flynn – Green Bay’s back up QB who will always be described as ‘solid’ but never ‘elite’.  And lest anyone think that is damning with faint praise, LSU won a national championship w Flynn QB’ing them his senior year.

•  Tyler Eifert! It’s safe to say that our stud TE recruit isn’t going to be bailing on his commitment after seeing how we involve that position in the offense.
•   ND tries a double reverse flea flicker – hey why not?  If not now, when?
•   Ruffer misses – alert the media!  If ever you’re going to miss, now was the time. Clearly, he pulled a muscle (or something) on the opening 2nd half kickoff).
•   Not much of a pass rush all day long.
•   Not a rhetorical question (to be asked annually for the next four years):  Does anyone now think that Kelly wasn’t the right choice?

Gone With The Wind.
This is the season for players and coaches to movin’ on… ND’s lost Rudy (and maybe Michael although with each day he doesn’t declare you wonder…)

This year’s big kahuna, Harbaugh, finally made a decision -  no doubt after too many hurtful comparisons to Brett Favre.  Good for ND on many fronts – hurts Stanford (and scrambles the thinking of several recruits) and really distresses Michigan who thought they were his dream job.  Bummer.   Welcome Les Miles?  Bring it on, Les. This ain’t the SEC.

Charlie Don’t Surf (but we think he should).

Coach Weis surprisingly heads back to the college ranks – to Gainesville of all places – after seemingly turning around the Chiefs moribund offense. Rumor has it that it was an ego clash w the head coach Todd “It’s All About Me” Haley although an as yet unconfirmed source swears they heard Charlie say to his wife, “If I don’t take this job, how else will young Charlie ever a date?”

Song of the Week.
What better time than a holiday-relevant dittie?  The Band is one of those terrific groups that will never get their due, at least by mass audience measures.  But they were fantastic.  So I offer “Christmas Must Be Tonight…” and if there’s a thread of relevance, it’d be in the chorus:

How a little baby boy bring the people so much joy
Son of a carpenter, Mary carried the light
This must be Christmas, must be tonight…

Tommy Rees is pretty easy to belittle – he’s 18 yrs old, came to school with little fanfare, throws passes that make you gasp and yet, the end results are pretty remarkable. Four starts at where?  Notre Dame stadium, Yankee Stadium, The Coliseum and a bowl game. 4-0.  He would appear by no means to be The Savior but if this is his Andy Warhol 15 Minutes, let’s give it up for him.

Terry’s Tool Time.
•   Sugar Bowl officials.  Lobbying the NCAA to let the OSU 5 play their bowl game?  Wow. The word ‘avaricious’ just doesn’t do you guys justice.
•   Gordon Gee.  Ohio State’s president – I understand Tressel having no moral compass, he’s a college coach after all, barely above the single cell amoeba on the food chain. But you ought to have some conscience.
•   Lebron James. Just when all the noise of your summer self-indulgence seemed to have quieted down, you give yourself / Wade / Bosh the nickname, The Heatles.

•   On The Field Officials.  Is it just me or has this past year seemed really, really bad for officiating, both college and pro.  No doubt there are some that defy understanding (witness the convoluted ‘must catch and make a football move’ rule in the NFL) but my new favorite is the excessive celebration rule – especially in the last few minutes of the game.  Case in point:  Kansas State scores on a ≈25 yard pass with about a minute left to pull within 2 pts. of Syracuse.  Their WR crosses the goal line runs straight ahead to the back of the end zone, stops and salutes the crowd. For, like, :02…  flags come out immediately – citing the fellow for calling attention to himself.  The 15 yd penalty is assessed on the extra point, making their 2 pt conversion attempt from the 18 yd line.  That was just wrong – the kid did nothing ostentatious and oh yeah, he thought he just made the play of the game!
•           Here’s what I’d like to see – give the ‘A’ Lot boys a shot at refereeing a game. My nominations:


Schadenfreude Winner of the Week.
1.  The State of Michigan.  101-21. Ouch.  Rich, at least you made everyone’s decision easy. And Mark, where’s that ‘aren't I clever’ smirk now?
2.  The Big Ten.  0-fer-5 on New Year’s Day.  Somewhere Temple is saying “we could've done better than that.” And you wonder why Notre Dame doesn’t want to have anything to do with you..
3.  USC.  Oh, that’s right… they didn’t get to play actually play in a bowl game.

And for all the Tools ‘n Winners this year, a bonus song… Cue Lo Green’s homage to unrequited love (a song I might add, known by everyone in this country between the ages 14-22, so by listening to this you’ll be exponentially more hip with your kids than you are right now). And while I have pointed to the recipients above, it's also only the best recruiting analogy ever.  Give it a listen – it’s quite catchy – although if you’re doing it at the office you might want to keep the volume low.

Recruiting Buzz.
As most of you know, these are the days when internet recruiting sites go en fuego while grown men in the coaching profession ask themselves the question, “I’m sucking up to self-absorbed 18 yr. olds… why exactly?”

Because it’s your job!  And you don’t want to have to go out and find a real job after lo these many years…

But I digress again.  Here’s a fast summary of the top kids who seem to be left on ND’s target list:

1.  Amir Carlisle, RB.  Committed to Stanford but has a) liked ND a lot all autumn as frankly, we’ve chased other guys. Will decide next weekend immediately after Kelly has an in-home w him.  (That works out nicely.)
2.  Shaq Williams, OLB.  Super-stud from Brooklyn.  Would be a huge ‘get’.  Has it down to ND / Syracuse / Penn State. Parents went to Syr.  Was supposed to declare today but decided he and the ‘rents needed to do a little more discussing. Impossible to read kind of kid but the smart money seems to suggest Syracuse will be the choice.
3.  Aaron Lynch, DE. Super-duper stud from Florida who committed to us, sprinkled grandpa’s ashes on ND’s field, then de-committed saying ND was firmly out FOR GOOD. Committed to Florida State then yesterday said he was opening up his recruitment again and he was going to take an official visit to ND next weekend.  While I write this, I’m reading that now, he’s going to meet with both schools coaching staffs tonight and then decide. To say this young man is confused would be the understatement of the year. No longer looks so good for the Irish…
4.  Savona Huggins, RB.  Very, very highly rated RB from NJ whose talent is only surpassed by his opinion of himself. He’s looking for a program that’ll give him 25 carries a game… hymn.  Apparently he likes ND a lot but Rutgers will promise him anything and looks like lead horse.  I'm not sure that’s such a bad thing but he would be a back unlike anyone we have currently.
5.  Chase Housell, OL/DL.  The kid committed to Florida then de-committed. He’s from Ohio and knows / likes ND a lot. Will decide between the two schools.
6.  Troy Nikolas, DE / TE.  Basically has always had his finalists as Stanford and Notre Dame. USC might be in the mix. (He’s a west coast kid.) With the uncertainty at the other schools, ND would seem to have a reasonable shot.
7.  Brennan Scarlett, DE.  A Portland, OR stud who loves ND but basically has to decide whether he can handle being so far from home.
8.  A couple of Michigan commits.  Names I can’t recall but play positions of need (OL / DL)…

It’s never too early to be thinking about your predictions… September 3rd, we start off with South Florida - who does our scheduling, the Marquis de Sade?
Posted by Crash801 at 3:27 PM