First off, apologies for the delay here… travel to NYC, short work week, children arriving home, Thanksgiving food coma and here I am.

The week in between the big Utah win and the Army game, I was looking for signs to guide my thinking – do I go the optimistic route of steady, sustained improvement or  the more pessimistic, it’s November-here-we-go-again direction of ‘Navy Debacle: The Sequel’?

I considered voodoo but then I remembered Lisa Bonet’s star turn in the über-scary Angel Heart* and quickly opted out. As much as I love great Cajun rituals (including, but not limited to, the whole ‘show us your ___’ in the French Quarter at Mardi Gras), self-stimulation with a dead chicken broke too many personal hygiene guidelines for moi...

* not only did Robert DeNiro as The Devil make fast work of her in the film but Bill Cosby forever disowned her for her lack of Cosby Family Values.

Clear evidence that a) the Life Is Not Fair axiom was alive and well, b) God has added a 5th Horseman of the Apocalypse (Famine, Pestilence, War, Death and Bristol), c) The Tea Party is made up of bad dancing white guys who don’t watch TV or d) all of the above.
In any event color me troubled. 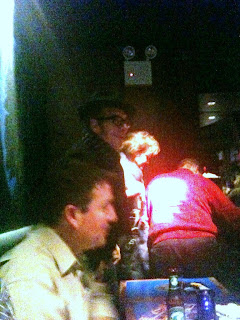 Portent #3:  Elvis Has Entered the Building

The Brothers Corrigan are at a well known jazz club in Greenwich Village Friday night, having a cocktail, waiting to order dinner…  when this guy walks in – alone – and sits down at a table next to us. I lean over to my brother and quietly say, “Hey, check out the Elvis wannabe…”

OMG. OMG. OMG.  Terry immediately turns into a 14 yr. old girl but otherwise remains cool as the other side of the pillow...

And I take this to be a particularly good sign.
Word of the Week.
Absolutely nothing seems to come easy this season.  In a week when you have a solid, reassuring win comes the report of a sexual assault by one of the players early in the school year – of a young woman who ultimately committed suicide. Wow.  Talk about a lose-lose. Not only a life is senselessly lost – and I always find myself wondering how one gets to a state where the world is completely devoid of any hope – but there is no chance for closure on this.  Only speculation and 2nd guessing (perhaps justified) about what happened, did the university handle it correctly and was there a connection between the two incidents.  Rather like the Declan Sullivan situation. Kelly must wonder ‘what else can possibly happen this year?’  Let’s hope very little.

Not exactly ‘A Lot’ but not bad.

The ND Class of ’11 show up, including daughter Ryan, the soon-to-be Purdue grad. The thought occurs to me "does she realize she doesn’t attend ND?"  Well I'm not gonna ruin her day – she’s with her buddies, her uncles and her dad’s friends. And loving every minute of it.  I must say, the whole history of ‘no women allowed’ at the bar was strangely…intriguing.  Kinda like the He-man Woman Hater’s Club: 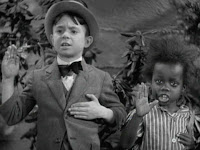 I, Tom Feifar, Member in good standing of the He-man Woman Haters Club
Do solemnly swear to be a he-man and hate women and not play with them or talk to them unless I have to.
And especially: never fall in love.
And if I do, may I die slowly and painfully and suffer for hours or until I scream bloody murder.

ü  Yankee Stadium!  A GREAT venue… for baseball.  $175 and these seats are… not good.  Oh well, live and learn. And thank God for the Jumbotron.
ü  ND 1st drive: bad Tommy Rees interception and I'm reminded of what my brothers used to say about me, “He may be a fool but he’s our fool.”  Brother Kevin says, not for the last time, “He will be running the scout team a year from now.”
ü  More about Tommy: yes I know he’s a mere freshman, starting in his 2dn game, in one of the highest profile stages in the country.
ü  Debate:  That blank look on young Tom’s face… is that preternatural maturity or a pilot light that really hasn’t flamed on?
ü  Army 1st drive: defense gets shredded but finally stiffens. Rut roh.
ü  Michael Floyd catches a few balls but one wonders whether he looks at his senior year QB options and thinks he’ll have a year that’ll enhance his draft status.

Half-time:  The Bat light goes on.  Terry meets Cincotta and Jim Splendore for a half time libation, subsequently missing pretty much all of the 3rd Quarter. Hey, it was worth it, we were fighting crime.

The defense has definitely looked great the past few week. Maybe the off season regimen is starting to pay off?

“Attack of the 50 Foot… Lini.”  Imagine my surprise – and alarm – when late in the game, victory well in hand, the Jumbo-tron camera has turned its lens on exultant Domers… and who in the first row, repeatedly on-screen, is none other than Tim Castellini!  He of the Shrinking Violet Castellini’s.

Bowl Eligible!
Okay, it’s not BCS but if ever a team needed 15 extra practices – especially with all the youngsters – it’s this team. So say hello to Orlando… or Detroit or some godforsaken place.  But hey

Song of the Week.
The game’s location being New York, the song has to have some roots here… a brilliant evening, spectacular venue, solid ‘O’ play and a surprisingly dominant ‘D’ play.  It may not last but for one night, it was pretty sweet. Thus I give you Joey Ramone’s cover of “What A Wonderful World”.

"I see skies of blue and clouds of white,
Bright sunny days, dark sacred nights.
And I think to myself,
What a wonderful world..."

Terry’s Tool Time.
Bo Pelini.  Head coach, Nebraska. How big of a tool do you have to be when you get reprimanded by your university president. A university in Nebraska?  Apparently while leading their team to a humiliating loss to the Texas A&M Aggies, coach Bo – a moniker that just screams ‘cave dweller’ – gets captured on national TV berating the officials for having the audacity to call 16 penalties on his ‘Huskers. Then he turns his frustration on his injured star QB and reams him, presumably for getting hurt. You're a class act, coach.

Schadenfreude Winner of the Week.
This week the theme was “Return to Tradition::

>  Michigan.  The Rich Rodriguez ‘dead man walking’ watch begins.  For ND fans, not sure this is a good thing (see below).
>  USC.  Thumped by Oregon State. And Matt Barkley gets hurt!   This must be what they mean  by the expression “adding insult to injury…” somewhere in heaven, my dad is smiling.

Recruiting Buzz.
Another week of weirdness.  Supposedly a number of the elite east coast recruits were supposed to be at the game but ended up not coming, allegedly watching the game on TV. Probably not a huge loss since under NCAA regulations, the team can't have contact with them any way – rather like a prison visit without being able to pick up the phone.
And what would be a Recruiting week without a de-commitment?  This time from the Michigan RB with the way cool name of Justice Hayes.  Lots of intrigue about this in as much as two weeks ago at the Utah game he was singing the school’s praises after his visit. To top it off, he de-commits – saying he wants to re-think the decision but ND definitely wasn’t out of it – then two days later, commits to Michigan, a program that’s almost surely going to fire its coach.  For everyone on this email with teenage children, you’ll recognizes the use of solid, linear logic immediately.

Supposedly there are other RB’s now in the mix and whatever assurances the kid wanted, he didn’t get. Score one for the adults.

At this point, I give up even bothering to wonder about this stuff.  Whomever called this part of recruiting the ‘silly season’ was entirely correct.

Should I Stay or Should I Go: Part II

The Jim Harbaugh to _____________ Watch has officially started.   If one is a UM fan, you know they’ll be burning up the discreet lines of communication, trying to a) gauge interest and b) lock him down fast.

Normally, I think he’ll garner a ton of NFL interest, not the least of which because a) his brother’s been successful, b) he’s coaching the likely #1 pick in the draft and c) he’s made overtures to go pro in the past. One apparently huge mitigating factor is this:  with a likely NFL lock out happening in March, any new coach won't get access to his team until the Collective Bargaining Agreement is finalized – which could realistically be late summer.  What owner is going to want to break in a newbie without the benefit of any off season?

So that would seem to leave three routes for coach Jim:
1.  Stay at Stanford until the NFL settles itself… he’s building a nice program and will likely be just as attractive of a Pro candidate one year from now.
2.  Go to Michigan.  Realistically, there’s not going to be a better college job open up in maybe a few years.  And the fit would seem to be perfect.
3.  Go after a pro job and convince an owner to take the long term view.  There could be some pretty attractive jobs there for the taking. Here’s three possibilities:
o   San Francisco – Mike Singletary is a loon and he wouldn’t even have to move.
o   San Diego – chronic under achievers, he went to HS there and the team is built to win now.
o   Carolina – they're almost certain to have the 1st pick in the draft and he could bring his QB with him.

The Wager.
Just two weeks ago, who’d a thunk there’d be any suspense to this damn thing… but the improbable good fortune of the Albert Villains lives on. Actually the pool has to be legitimately entertained. USC is still USC – long on talent, short on character – but ND would seem to have a real shot.

Shout Out
1.        Women’s soccer team.  Now in the Final 4 after giving top ranked North Carolina their worst beat down (4-1) ever.  Not sure whether much was expected of this team – they always seem to be pretty darn good – but it’d be fitting if they could bring home the gold this year.
2.         Men’s hockey – last time I looked they were 11th ranked with 12 freshmen on their team.

Finally, Happy Thanksgiving to all. As much of a colossal buzzkill as this football season has been, it was that superb from a social, class of ’79 standpoint… for someone who lives a mere 40 miles from campus, I’m especially appreciative of a) our esteemed tailgating entrepreneurs (Messrs. Flaherty-Castellini-Rasmus-Behrens-Belknap) and b) all those who came great distances to hang out and revel in the pre-game festivities.  Not only were those affairs longer than the actual game, the talent was far superior and the entertainment was consistently (and predictably) excellent.

Let’s see if we can close out the regular season with a win.
Posted by Crash801 at 5:54 PM