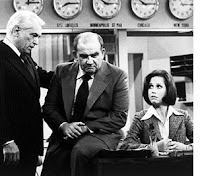 Lou Grant used to say to Mary Richards, from time to time, “Mary, you’ve got spunk…”    To which he would immediately add, “I hate spunk”. 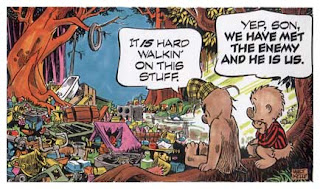 Well, similar feelings welled up watching this past week’s Western Michigan game. Only my frustration wasn’t directed at the lads from Kalamazoo (incidentally, does that make them kalamazoomies?), it was at Team Kelly.  Perhaps it was after the third time that Crist threw 4 yds short of his open target that I began to quote the philosopher Pogo,

The enemy is us, indeed. So I found myself imploring the TV, “ND, just make a choice.”  Be good. Be awful.  Just commit to being something consistent.  And wouldn’t you know, Kelly seemed to have the same thing on his mind – did everyone pick up on the extreme sarcasm he had toward his defense at halftime?  And then they came and played the 2nd half like one would've hoped the entire game would've gone.

One theory is that a letdown was inevitable after the first six games.  Maybe so.   Better to have the bad half, good half sequence than the reverse I suppose. At least one can hope this is the beginning of a trend.

Word of the Week.
vi•cis•si•tude.  This seemed like a good word for this week, aptly capturing the ups and downs that still plague this team.  Plus is multi-syllabic so it’ll give the accounting majors something to work into their off hours conversations.
/vɪˈsɪs ɪˌtud, -ˌtyud/   [vi-sis-i-tood, -tyood]
–noun

1. a change or variation occurring in the course of something.
2. interchange or alternation, as of states or things.
3. vicissitudes, successive, alternating, or changing phases or conditions, as of life or fortune; ups and downs: They remained fans through the vicissitudes of 20 uneven years.
4. regular change or succession of one state or thing to another.
5. change; mutation; mutability.

—Related forms
vi•cis•si•tu•di•nous, adjective
The Prophecies According to Roger & David
So as I clear the western suburbs of Chicago on my way to Iowa last Friday evening – Kay Corrigan, my 85 year old mom, had knee replacement a couple weeks ago and I was going home to move her out of the post-op care facility – I begin listening to non-stop Pink Floyd. A practice, let me tell you in hindsight, I should've started 25 years ago on these drives.  And as I’m singing my way past DeKalb, it occurs to me:  when it comes to the Notre Dame football program, these guys are Oracles!  (Nostradamus?  A poser with a better publicist).
Witness the following and you decide:

I could go on – I haven’t even gotten to the predictions suggested from The Wall, Animals and Momentary Lapse of Reason albums – but coincidence?  I think not.

Stuff My Mom Said.
Kay Corrigan quote I:     "God doesn’t close a door that He doesn’t open a window..."

Implication:  Kyle Rudolph suffers a season ending hamstring injury – one that (I think) has a 6-7 month rehab period attached to it, basically taking him out of any pre-NFL draft workout consideration.  Does it mean he won't go pro? No – I think he’d still be considered the clear #1 TE prospect – but one would think the odds of him returning for his senior year have significantly increased.  Not likely that many (any?) teams will risk blowing a super high draft choice on a medical risk.

Kay Corrigan quote II:    “But for the grace of God, there goes I…”

Implication: Does it seem like college football has turned into Sodom & Gomorrah, ethics-wise?  Or at least turned back the clock to the 1950’s and 60’s when the sleazy underbelly of pay-for-play was a well oiled machine… USC goes down in flames (sniff), now its North Carolina (sniff) and what appears to be most of the SEC.   Now you have a former agent coming forward to say how he was paying players for most of the 1990’s at such esteemed places of higher education as Ohio State, Washington State, UCLA, Tennessee, Illinois, Michigan State, Colorado, USC and Arizona among others.

Implication:  Okay, mom didn’t really say that but being home last weekend, I was reminded that she has an unerring body clock that tells her when it is, indeed, 5pm.  And that means vodka tonic time!  Where was this woman during my college days?!

This one goes to 11
Let’s hear it for the University of Georgia’s football program who last week had their 11th … eleventh… team member arrested this year. That’s an entire side of criminals!  So perhaps for Mark Richt, unscrupulous agents aren't his biggest problem. Maybe it’s finding an agile legal team that works 24/7.

A salute, this week, to the Chilean miners who spent ≈70 days trapped far below the earth's surface in what had to be a singularly hellish experience.  This song has absolutely zero to do with their ordeal other than a superficial link in the title. (Although one would have to believe that while down there, at least a few of them probably thought about music, loose women and recreational pharmaceuticals.) And so, Humble Pie’s “30 Days In The Hole”... a fun, fantastic rocker from the early 70’s.

Terry’s Tool Time.
Urban Meyer.  Not only is he going on 30+ arrests for his program since he’s been there – someone’s bucking for a Lifetime Achievement Award! - this week he reinstated his fastest, most athletic reprobate, Chris Rainey (who texted his ex-girlfriend, “Time to die, bitch”) because he needed to jump start UF’s anemic post-Tebow offense.

Too bad it still didn’t help.

Schadenfreude Winner of the Week.
Maybe the best week yet…

1.  Nebraska.  Plays a real team, after feasting on the carrion that is the Big 12, gets spanked by Texas during their off year.  Pfffft goes your national credibility.
2.  Ohio State.  Can we please stop with any more “Terrell Pryor Impact Player” talk?
3.  Michigan.   Denard gets hurt – who coulda predicted that – and the snarky Tate Forcier enters. Too little, too late. Go Hawkeyes!  And by the way, Tate, no one gives a toss that you're from a San Diego quarterbacking dynasty, Le Famille Forcier. Pass the Grey Pupon.
4.  Florida.  Three Gator straight losses – not even Ron Zook accomplished that – this time to Mississippi State, a team most known for… absolutely nothing. HA HA HA HA HA HA HA HA HA HA.
How’s that blood pressure, Urbie?  Winner!

Recruiting Buzz.
Easy come, easy go. One of our earliest recruits, highly touted OT Jordon Prestwood, de-commits for no apparent reason other than he felt he made a rash decision.  Kids these days.  A Florida lad, he’s apparently looking a little closer to home, at both FSU and the Gators while not ruling out a return to the fold for ND.

On a more optimistic note, Savon Huggins, the NJ stud RB, made his official visit to this week’s game; hopefully he was impressed with the 2nd Half commitment to running the ball. And hopefully, he was still tailgating throughout the 1st Half.

The Wager.
We’re in a presumed (hopeful?) steady state until the Utah game… but the 7-win troika still has to be feeling good about their chances.

In Memorium.
We lost a pop culture giant this week, Barbara Billingsley – known mostly (and deservedly so) as June Cleaver, the Über-mom of ‘Leave It To Beaver’ fame. But many of us will hold her in equally high esteem for her star cameo turn in “Airplane” as the helpful passenger who comes to the aid of the put upon flight attendant…

On that note, until next week. Go Irish, beat those spunky Midshipmen. Oh and programming note: the game starts at 11am CDT.