Everyone has heard the “Alas poor Yorick, I knew you well…” quote from Hamlet. Even the Accounting majors. Relatively few know the following line, “a fellow of infinite jest, of most excellent fancy: he hath borne me on his back a thousand times; and now, how abhorred in my imagination it is…”

But that’s not the point. Not yet, anyway.  As I was searching for anything to write about this week – such was the soul sucking nature of Saturday’s latest experiment in masochism – I came across a really interesting article written by the aforementioned Mr. Wallace - about Roger Federer after his 4th consecutive Wimbledon win.  Superbly written and with unusual insight – Mr. Wallace was a highly regarded tennis player as far as up to college – he describes “Federer Moments’ when watching Raja play… shots of such freakish skill and prescience that one’s jaw drops, eyes protrude and ‘sounds are made that bring spouses in from other rooms to see if you’re okay’.

With due respect and all proper attribution to Mr. Wallace, I’m taking those same reactions - for the entirely opposite reasons  - and renaming them ‘Notre Dame Moments’.

And no, Lisa, I’m not okay.
But my imagination is similarly abhorred.

If Saturday’s Game was a movie poster, it’d be 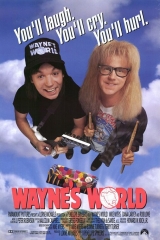 Pretty much in that order.

transitive verb
1  : to dry up
2  : to preserve (a food) by drying : dehydrate
3  : to drain of emotional or intellectual vitality

So what exactly is going on here? We know the team isn’t bad.  We can see talent.  And yet…

Here are a couple working theories:

- It's All Just A Really Bad Dream 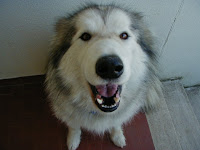 Believe it or not, if the game had ended 30 seconds earlier, I’d be giving this award to Tommy Rees, despite all his miscues.  Why?  Because that stadium was so freaking loud – TV didn’t remotely do it justice… 115,000 loons screaming their lungs out in a building that’s been architecturally redesigned to keep the sound in.  Yowzer.  ND will never again play in conditions that difficult for communication.  Which leads me to this insight:  Notre Dame Stadium scares no one.  We’re not loud. We don’t intimidate, threaten or even confuse anyone (except maybe ourselves when the public announcer takes over). In fact, our fandom revels in the ‘pleasurable game day experience’.  No shit. And no wonder our home record is so mediocre.

But I digress.  This week’s coveted Buddy goes to Michael Floyd. The guy is just a beast.  Just wish they looked at him once or twice on those 3rd and 1’s… you know, the simple bubble screens that USF repeatedly ran for 4-8 yds against us last week?

Schadenfreude of the Week.
•  The U.  You’re facing penalties of SMU-proportions and you lose to team that dressed like a jigsaw puzzle.
•  Penn State.  Spanked by a team with their own QB troubles… has anyone yet told JoePa they lost?
•  Ohio State. You beat Toldeo by 5 pts. And sit another 8 guys for taking impermissible benefits (in mob-like envelopes… hey OSU, one word for your bagmen – PayPal.) What part of ‘lack of institutional control’ don’t you understand?

Terry’s Tool Time.
•  Notre Dame.  How can we not point the finger at ourselves. Shame on you for making me turn to nihilism to get a little optimism in my life.

Song of the Week
Another song taken from the way, way, way back vault…  continuing the theme of curses (and the unfortunate consequences of underestimating someone with mystical powers).  One of Harry Nilsson’s very early efforts, “Rainmaker”.  Enjoy.

“The rainmaker smiled
As he hitched up his wagon
And without a word he rode away.
Then the people of the town
Heard the sound of his laughter
And they knew the rain had come to stay.”

Tailgating.  The private port-a-loo would be nice but if we’re raising our game, also consider…

1.  The uni’s.  Not as bad as Maryland but one game is enough.  Ours looked like high school, UM’s looked like an homage to munchkin land.
2.   Night game.  Loved it. It’s all about pacing oneself. But I don’t have to tell this group about the benefits of moderation.
3.   Denard.  A terrific college athlete.  Horrible passer. NASA would be jealous of some of his moon shot’s.  And yet…
4.    Elizabethan Revenge.  Actually a class Shea is taking this semester.  That’s not the scary part – though one might arguably ask oneself, ‘to what good end can this knowledge possibly have?!’   No, the unnerving part is Shea reporting that "my prof totally reminds me of uncle Tim".  Yikes.

“How many ND alums does it take to close a tent?” 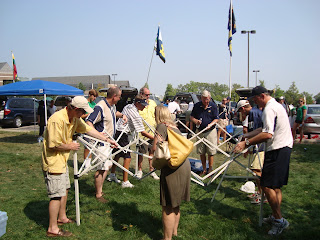 
Another five bite the dust... will Brian rue his last minute decision to trade up from 6 wins to 8?!