at ND’s Spring game and I was one of ‘em.

I.              Overall. The problem with critiquing scrimmages is that it’s always something of a zero sum game. If someone looks good then you wonder if it’s because someone else was looking bad. Plus, even sitting in the expensive seats – four rows behind the bench – my vision was partially obscured by the large woman sitting next to me.  How ironic, in a week where United Airlines declared that super-sized passengers will have to pay for two seats. She would’ve been a candidate. The other caveat is that the coaches always try to reveal nothing from a strategic standpoint (so you saw one flea flicker but no Wildcat formations or trickery where, say, a John Goodman shows off his rocket arm).

But the vibe I came away with was decidedly optimistic and not just because I’m a glass-half-full kind of guy.

II.             Offense. Jimmy looked average but it was hard to be bothered very much by it. Clearly the objective was to run, run and run. They threw, not particularly well against a secondary that could be scary-good (more on that later). Rapid thoughts: Crist throws a nice ball but he didn’t do anything that screams ‘start him!’ throws an ugly ball but it got to where it’s supposed to go, against the 2nd and 3rd stringers.  A few of the O-line have the Hells Angels haircut look going and I couldn’t help but think, “hope they play like the Angels too.”  Gone are the days of the lumbering TE – all of our guys are big and looking really fit – almost WR-like.  Fauria played a lot.  And Ragone still limps just a little – and looked tentative.  Back to the O-line, my prediction: they’ll be better but they still won’t be an impose-our-will-on-the-opposition type group. And, as much as it pains me to say this: Sam Young may very well be a high draft pick one year from now but if that happens, we’ll all be looking back and wondering where the actual production was.

But let’s end on a more optimistic note:  Armando Allen looks like the guy we thought we were getting two years ago (and I mean that in a good way, Sully). Call him “Poor man’s Reggie Bush.” With our o-line, he could have any number of spectacular 3 yd runs. That all said, I think Jonas Gray might be the best RB on the team – and it might not even be close. I heard he’s had trouble with fumbling but if that guy ever got a chance with the 1st team and in situations where we’re not just running out the clock, look out. And then there’s Cierre Wood showing up this summer. Not a group to be worried about.

III.            Defense. I know it’s only April – when a fellow’s heart is clouded with the optimism that comes from a freakishly sunny, 70° day – but from what I saw, they’re going to be good. And maybe really good. And maybe really quickly. The secondary is already very, very good (the Blanton kid never gets beat - stayed with Floyd all day long – and right now Walls is the nickel back!) They’re really fast and Tenuta has ‘em attacking all the time. I mean, all-the-freaking-time. It truly felt like watching Ga. Tech a couple years ago.  And many of the key guys (Fleming, Neal, Teo (?!) weren’t even there.

What struck me as a key going forward will be the LB’s ability to be sure tacklers and the front guys to be disciplined in whatever lane they’re supposed to be charging.  What was cool was these guys always going top speed, balls-to-the-wall, forward – and knowing the DB’s were like glue. But – and it’s a big but – they seemed susceptible to draws where, if the RB’s got by the first charge (and many times they didn’t), it was basically left to your LB’s to have diagnosed the play and not miss. Happily Mo Crum was nowhere in sight. To be fair, perhaps that kind of aptitude just comes with experience in the system.

One other observation based on nothing empirical: coaches Tenuta and Hart seem to really fire these guys up. A lot of obvious camaraderie on that side of the ball. If they don’t have to spend 35 minutes a game on the field, this group could be very well be the story of the year.

IV.     Charlie. Perhaps it was just the full navy wardrobe which makes everyone look slimmer but he looked like he lost weight… less ridiculously pear-shaped… and (see above) could he not be the latter spitting image of Samuel Johnson, the 18th Century savant?  A man of pithy thought who wrote The Dictionary of the English Language over the course of eight years (by himself!)… after reading every notable piece of English literature from Shakespeare’s time to his own present… and jotting down all the words he thought needed explaining, his more notable quotes included: 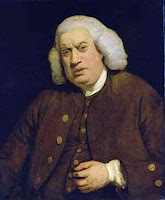 Ø  “A man of genius has seldom been ruined but by himself” – I believe this could ultimately be Charlie’s epitaph.

Ø  “Patriotism is the last refuge of the scoundrel” – actually I’m saving this for my death match debate with Feifar at the reunion.


\
The Weather. Perfect. Tailgaters in mid-season form… recruits and tourists all looking duly impressed… the lawns looking manicured, no doubt in preparation of the President the ’79 .  You gotta believe this type of thing may not seal a deal for a recruit but it sure leaves them with a nicely idealized impression of the school (see section for answering that question).  At any rate, score one for the Mother Nature.

VI.           After the Game. I walked over – oddly sober – to the Linebacker for a beer and “Swiss and ‘shroom” Burger, with onion rings on the side.  Heaven!  And while the $4.25 beer was not the size of my head (that would be exaggeration merely for the purposes of humor), it was HALF the size of my head – call it ‘profile size’.  Great value in these challenging economic times. And while the experience was indeed like coming home, it remains disconcerting to see there has yet been no recognition – not even the slightest of commemorative plaques – at the table where Behrens / Corrigan / Maher / Wills studied so diligently for that St. Mary’s “Personal Finance” final in the Spring of ‘79. And given that I was the only one in the actual class, could there be any better testimony to the diligence and commitment to higher learning than these three academicians auditing the final… and challenging the very tenets of how one measures said learning?     I think not.

On my way back, I popped into the Baseball team’s doubleheader vs. (admission was free with your Blue-Gold ticket). Nice little stadium and I discovered yet another difference between me and Golden Tate. After the Spring game, I headed to the ‘Backer. He, apparently, made like Superman, changed out of his football uni – at the ballpark – and had three hits before I even showed up. 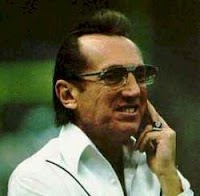 .          Recruiting. The past week has been filled with a roller coaster of early decisions not going ND’s way while a lot high profile recruits visited the game and proclaimed ‘the awesomeness that is ND’ shortly thereafter. Big freaking deal. I’m taking more of a Zen-like (and reality-based) approach to recruiting this year... these are 18 yr olds we’re talking about after all. More to the point this year, Charlie’s tenure / the state of the program / recruiting ’10 are all questions, to be answered in Al Davis fashion, “Just win, baby.”

Nostro-Terrus says, “If they win 10, this ends up being a ‘we’ve righted the ship’ year and the recruiting ends up Top 5.  If the record is 9-3, he still keeps his job (whether we think he should or not), goes to a reasonable bowl and recruiting is still Top 10. An 8-4 record gets into really dodgy territory… the rumors start after the USC game (a likely loss in this scenario), one prays that the losses are somehow explainable (injuries maybe) and Swarbrick spends his Halloween! making the most discrete of phone inquiries…”

VIII.         Prospects for Autumn. When pondering what yesterday means for next year, one couldn’t help but be reminded of a quote once attributed to the reclusive Thomas Pynchon, arguably (as you all know) the most important post-modern American author of the past 60 years.

During the 60’s when Pynchon was facing a creative crisis with 4 novels in progress all at once, he said, "If they come out on paper anything like they are inside my head, then it will be the literary event of the millennium."    For him, they actually did, with game changing novels like “The Crying of Lot 49” and “Gravity’s Rainbow” being the result.

But will it come out for Charlie like it exists in his head?

I still think we’ll know by the end of the 3rd Quarter in the game.