Round about the 7:00 mark of the 4th Quarter yesterday, here’s how I was thinking of starting this week’s missive: 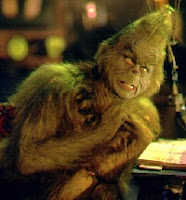 “The nerve of those Whos. Inviting me down there on such short notice… Even if I wanted to go my schedule wouldn't allow it.

Of course, if I bump the loathing to 9pm, I could still be done in time to lay in bed, stare at the ceiling and slip slowly into madness…

But what would I wear!?” 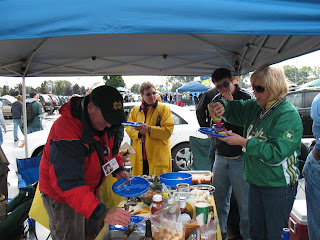 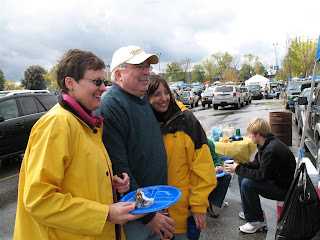 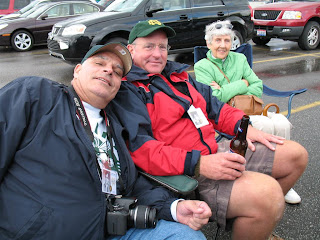 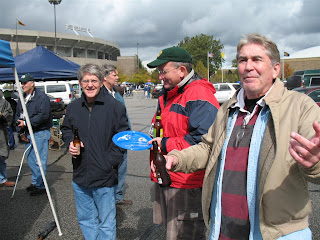 As an aside, you might ask what kind of a son subjects his mother to such a toxic doses of Lohn & Ward?  A distracted one, that’s who.

Then came The Stand, parts I, II and III and I had a bit of an epiphany. Then came Jimmy and The Drive: The Sequel and the clouds parted even more. And finally came the Kyle & Harrison Headbanger’s Ball and a full state of consciousness was realized.  Here’s the parallel universe that I now exist in, vis a vis ND Football:

1.       They are what they are. Not elite, not bad – and not necessarily even under achievers.  Very entertaining offensively. Somewhat maddening defensively. I think they genuinely love their head coach and will do whatever it takes for him even while some critical fundamentals elude them. I say enjoy them, watch ‘em get better – they will – but don’t count on a huge overnight improvement. My bold prediction:
a.       USC – we play ‘em tough but lose 28-17’ish because a) their defense is pretty good and b) we can’t stop their run (at some point, Joe McKnight slips the inevitable tackle and is gone…)
b.       The rest of the games – we’re in every one of them… four games are comfortable wins and two are nail-biters… (the Oracle says ‘try later’).
2.       Terry’s wish list.  Tackling, tackling and tackling.  Defensive backs that play the ball. Someone who is a little more threatening on kickoff returns.
3.       The Huskies. I was always nervous about this game – for one, subscribing to the “Jake Locker will be the best QB ND plays” school of thought. So yesterday wasn’t a surprise to me (‘though some of the wackiness was). And I think history will show that ND did not ‘play down’ to a bad team but hung in there against a team you won’t want to play later this year – or next. If Sarkisian can find a Locker successor (Montana the Younger?), that program is going to be a force in the Pac-10. And finally, is this team not the single greatest indictment of just how god-awful Ty Willingham was as a coach?
4.       The crowd.  I’m increasingly of the opinion that ND stadium, beyond the sense of history, is not really that tough of a venue for visiting teams. We’re just not that loud, at least until it gets down to scary crunch time.
5.       Jimmy. I defy you to tell me anyone in the country that’s playing his position better.  And I think you all ought to start wrapping your mind around the idea that, barring injury, he won’t be coming back next year.  And I wouldn’t blame him. As an aside, he has remarkable pocket presence – where and when to shift ever so slightly… leaving the pocket always keeping his eyes upfield...  It may have taken a year (and a stable o-line) longer than expected, it’s nice to see someone absolutely live up to their significant hype.
6.       Ethan.  Does anyone else get the feeling he could be an all-world DE? To be fair, I think this is a function of the coaches knowing they just don’t (yet) have all the horses to make that defense go.
7.       Manti. Put him in, do not take him out.
8.       O-line.  Did the job when they needed to but like the team as a whole, I’m feeling like they’re not quite as good as we thought but absolutely much, much better than a year ago. Hey, everyone remember the 1st and goal (I think) at the 3 yd line in OT – and a flag was thrown?  While it ultimately went against UW, did anyone else immediately think “holding on Sam Young”?
9.       The officials.  I am not a conspiracy theorist but man, we continually get some funky calls made in our game.  Among the strangest (and I know I’m preaching to the choir here):
a.       The initial Washington fumble. I thought the rule was it had to be indisputable to overrule (e.g. Kyle’s drop a the end of the game) and while the RB’s knee was bent, it didn’t look to me like it wasn’t air between the knee and the grass.
b.       Roughing the snapper?! (And not even the first time that’s been called against us but have you ever heard of it called anywhere else?!)
c.       Sergio’s pass interference call.  I was closer (section 26, rough 47) to the play than the ref that threw the flag. Seriously. He had to be 50 yds away, viewing through a maze of players in the middle of the field.
d.       The excessive celebration flag that got picked up. I saw one person write this morning – ‘did the ref think we were taunting our own crowd?’
10.   Red Zone ‘O’. Okay this is stating the obvious but is there anywhere that they miss Michael Floyd more? I think not.
11.   Red Zone ‘D’.  If I were scheming against us, what they tried was pretty solid strategy – we’re just not (typically) that stout. But in hindsight, given the tackling woes, wouldn’t you have tried to get one of your skill players in space with our LB  / DB’s a couple times?
12.   Charlie.  This may distress some of you but I think he’s becoming significantly more difficult to fire with every passing week that the team puts out effort like this. He calls a phenomenal offense game, he’s recruiting kids that are bringing quality depth to the units. And now they’re playing their asses for him?  They may still lose (I’d like to think not more than) 2 more games but unless they’re really bad ‘mail it in’ efforts, I’m now thinking he’s pretty safe even with a 9-3 / 8-4 record. My mantra: who are you going to get that’s better?

Schadenfruede winner of the week: it can be none other than Meee-chagan.  And it was a Big 10 conference loss as well. Sweet!  And now they’ve got Penn State, Iowa (in Iowa City), Wisconsin (in Madison) and Ohio State still to go. Still waiting for Mr. I Don’t Get Nervous to get snapped like a twig. (A girl can dream, can’t she?)

Finally, an extraordinary debt of gratitude to Mr. Flaherty on two levels:  1) yesterday’s tickets / parking pass he secured for my family was fantastic… unbelievable – the three older bros + nephew sat in your seats and (even in the downpour) just loved it. (Mom shrewdly watched the game in the JACC w Lisa.) We’re already planning next year’s reunion (tentatively Yankee Stadium and the Army game). And 2) for sending me to You-tube to fall down the rabbit hole of the Hitler-in-the-bunker parodies on a variety of topics, many sports related and many not.  They’re absolutely hilarious and I’m linking two:

Hitler on Notre Dame’s coaching search (circa 12/08):  http://www.youtube.com/watch?v=Uf_yyr3ifVI
All of us will relate to his sentiment.

Hitler gets banned from posting on Wikipedia:  http://www.youtube.com/watch?v=TYvldOuZ6_k
Wait for the Sarah Palin reference.
I would also recommend the Hitler gets scammed on E-Bay but will spare you the link.

That’s it for this week – see many of you in two weeks.

Oh, one final thing: my wife, at the Bookstore yesterday, turned to me and said, “That’s you in 10 years.” 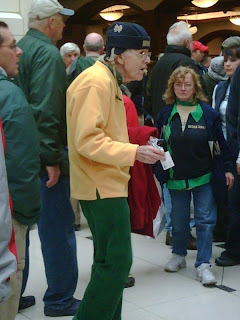 That was just mean.