Forgive the ‘radio silence’ over the past two weeks… as you know I spent last week getting in touch with my Inner Idiot, KC-style, and the work week got away from me. Let’s start with the new feature:

Word of the Week I:  with my final journey to ND in the books, word #1 is in tribute to all the fantastic tailgaters I was fortunate enough to participate in this past year. The BC was no different, even in snow apparel. Plus some of us learned of a new species, that of the vodka slut (see bottom right picture)… Matt, Mark and I watched girls practically mainline the nominated Bloody Mary base (“we don’t need no stinking Mr. T mix…”) and could only ask ourselves, where were these women when we were here? 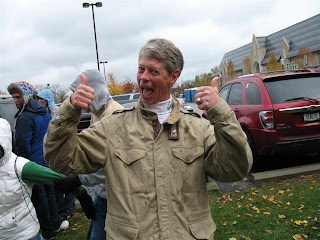 Of, relating to, or typical of the worship of Bacchus.

Word of the Week II – not one of my favorite words but to the degree that so many of ND Nation are totally ‘glass half empty’ about the program, I figured this’ll come in handy at cocktail parties, water cooler chat and future emails. I’m pretty sure you’ll figure out how to put it in ND football context.

BC
ü  What the hell is up with our turf?!  The number of slips we see every week is unbelievable. Whether the conditions are bad or not. And with the number of timing plays we run, passing-wise, something’s gotta change.
ü  4th and goal.  I’m of two minds here. In a situation like that, you never take your best player (Clausen) off the field, right? That said, Hughes scores – fairly easily – if the BC guy doesn’t lay an illegal and dangerous head-to-head hit.  Yet players do it all the time… the amount of head hunting that goes on every week (see Mays, Taylor) is remarkable.  The NCAA better get a grip on this soon – dare to dream – someone’s going to get paralyzed or worse.
ü  BC should lose 2 scholarship / year for the use of an exceedingly irritating – and headache inducing – jersey font.  I have a neck ache for having to bend my head to read their numerals.
ü  Jay Leno. Back in the day, I saw leno at a local Chicago comedy club before he was Mr. Talk Show Host. Perhaps a few of you were with me. I’m typically horrific about remembering jokes but he told one I’ve never forgotten. He said, “Why do they call dead people ‘late’?  They’re not late, they’re not coming!”  That’s pretty much how I feel about our DB’s, literally and figuratively.  I think we’re kidding ourselves if we think it’s going to get fixed during the season.  My prediction: at least 3-4 more shoot outs this year.
ü  Rod Serling’s familiar words went something like this: "There is a dimension beyond that which is known to man.  It is a dimension as vast as space and as timeless as infinity. It is the middle ground between light and shadow, between science and superstition, and it lies between the pit of man's fears and the summit of his knowledge... This is the dimension of imagination. It is the area BETWEEN THE HASH MARKS, the Twilight Zone.”  Okay, perhaps I’m taking some creative license but you get the point. Nice to see this got a little better in the WSU game.
ü  Brian Smith. You’re good, you play with a lot emotion. I get it.  But could you please get your head out of your ass AFTER you make The Big Play? 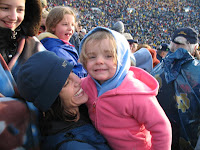 ü  Planet Claire. A great B-52’s song (“Some say she's from Mars, Or one of the seven stars”) but for those of us sitting in Uncle Jerry’s seats, it was the little girl from Wyoming sitting in front of us, making the game palatable.  Let me ask any one of you this: would you smile like that if you had Mark / Matt / Terry right behind you?  I think not.

WSU
ü  So this is what the Defense was supposed to look like. (Why couldn’t we play these guys, like, once a month?)
ü  I can’t help shake the feeling we’ve got some really, really good athletes among the Front Seven. We’re just not very big - so how do you make that work for you? I’d like to think that athleticism will come in really handy against a traditionally irksome Navy offense.
ü  O-line. They’ve gotten much better, no doubt. But they have to be the most football-dumb / undisciplined group… how many really big plays have we had called back this year where one of the group has done something totally dumbass that had zero effect on the outcome of the play?  More than once.
ü  Nick Tausch. Absolutely love him – when was the last time we had a K this automatic but someone needs to tell him on extra points, immediate elevation over distance. It’s only gotta go 20 yds. He may end up with a higher kicking percentage on his FG’s than his PAT’s.
ü  Punting.  “We are Not Good!  We are… Not Good!”  Unlike place kicking (where perhaps accuracy matters more), maybe we can at least hold out hope that a year in the weight room will help Mr. Turk.  The field position issue was huge in the BC game and putting our defense in short field situations is a recipe for disaster.
ü  Ragone’s got some wheels.  It’d be nice to see it on an actual offensive play.
ü  Dayne. Bummer about the knee, especially after the terrific deep post pattern to John Goodman (my favorite play of the game (see early Twilight Zone reference). That ball travelled 45 yards on a line. But the probable reality is that he wouldn’t have played much the rest of the year… maybe next week (ironically).
ü  MVP! MVP! Jimmy may be the best player on this team but if you take the concept of ‘most valuable’ literally, Golden Tate would get my vote.
ü  Michael Floyd.  This week is the important MRI (I think) for him getting back on the field. The sooner the better.  Over the last two weeks I must’ve seen at least four catches of the ‘jump ball’ variety that you know he would’ve caught easily that weren’t.
ü  Pat Haden.  “That is not a costume…” comment after the camera pans the leprechaun.  I like the guy. A lot.  And how prescient was his opening remark about Tate’s ability to go up for balls?


ü  Lady of the Lake.  “Strange women lying in ponds, distributing swords is no basis for a system of government…”

Jimmy. It’s a testimony to his excellence that when his stats end up, as they have the last two weeks, ≈ 250 yds passing, 70% completion, 2 TD’s and 0 INT’s, people yawn.  He probably won’t win the Heisman but no one will convince me there’s anyone better this year.  Boy, I hope he comes back.

Schadenfruede winner.  It’s a tie!  USC – just getting drilled by Oregon - and Michigan – losing to a horrific Illinois team. Two precocious freshman QB’s,  two-less-than-prodigious days. News alert:  Barkley’s hair is still peroxide blonde and Tate still isn’t nervous (‘though is really, really sore from getting the bejesus knocked out of him).

ND Alumni of the Week.  Brady Quinn; how much must Eric Mangini hate him if he won’t play him even as Derek Anderson stinks it up every single week.

Favre-aggedon. 3:15pm (CDT) today, I’ll be in front of the TV and I’ll be booing the shit of #4 and feeling really, really good about myself.