This was a tough week to arrive at the appropriate theme for the Implosion we’re currently witnessing. 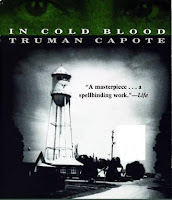 Choice #1: today is the 50th anniversary of the “In Cold Blood” murders.  The non-fiction account of a horrific, senseless, psychologically complicated Midwestern crime.

Just like Notre Dame football for the past 15 years. In Cold Blood was made into a pretty good  movie starring Robert Blake, who was later tried (and acquitted) for the murder of his wife.  Talk about Life imitating Art (chronicling Life)!

Speaking of movies, after the Navy game, Jerry Perez accurately likened watching the game to viewing a really bad horror movie you had seen before.  So watching last night’s torture, it got me to thinking, “what was the worst movie I’d ever seen?”  Ironically, it was something I’d seen with Mr. Perez, in his Grant Place (Chicago) apartment during the ‘80s…  “Mike’s Murder”, starring Debra Winger with a soundtrack by Joe Jackson. Despite that star power, it was ultimately… unwatchable.

Seasonally appropriate, dark and surreal enough but ultimately this story ends happily and I’m not quite prepared to go that far yet. 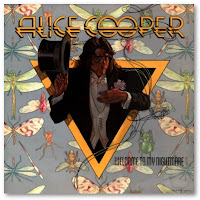 Choice #3 – continuing the theme… “Welcome to My Nightmare”, Alice Cooper’s concept album written when we were freshmen.

Welcome to my nightmare.Welcome to my breakdown.I hope I didn't scare you.That's just the way we areWhen we come down.
We sweat, laugh and scream here..."

But the lyrics sealed it for me – could there be any words that describe us better?!

Word of the Week - if pronounced correctly, use of this word will make all of you (except Perez*) sound significantly smarter than you actually are.

Ennui [ahn-wee]
-noun
A feeling of utter weariness and discontent, resulting from satiety or lack of interest; boredom.
Used in a sentence:  The seemingly endless Notre Dame football season produced an unbearble ennui.

*Jerry is already smart, knows this word and can pronounce it confidently around others of higher social station.

Game Thoughts – there’s little to comment on anymore, play-wise, that we haven’t already been observing for the past 10 weeks so I’m going to take a little different approach…

Schadenfreude Winner of the Week.  Where to start?  Michigan, AGAIN.  USC, routed AGAIN. (Karma remains a bitch, eh Pete?)  Miami. Simply a cornucopia of positive losses. So why do I still feel so bad?

The Enemy of My Enemy is my Ally.  Jim Harbaugh, come on down!  Putting aside the disconcerting implications for ND of Stanford’s 55-21 dismantling of USC, here’s a guy who went for 2 pts after having already scored 48!!! Yowzer!  But let’s not kid ourselves; this guy is auditioning for the NFL, not ND. (Who doesn’t think the Oakland job won’t be open by New Year’s Day?) 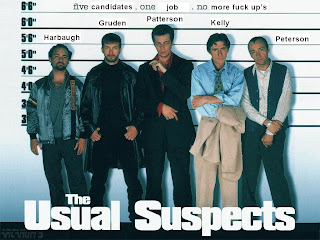 As a few of you know, my ideal target is not even in that lineup… that would be the 58 yr. old Butch Davis, who coaches at the Notre Dame of BASKETBALL programs, and whose UNC Tarheels are 5-0 against the last five ranked teams he’s played.  I have no idea if he’d even be interested but with Bobby Bowden and Joe Pa channeling their inner Charlton “you’ll have to pry this job from my cold, dead hands” Heston, Butch’s age doesn’t represent a deal breaker for me.

Choice #2, at this point, would be Harbaugh. Everyone hates him (probably w some justification) until he’s on your side. Just like Holtz. ND would likely appeal to his ego but as stated earlier, I think he’s hunting professional ‘game’, like his brother.

“Another One Bites The Dust.”  Thanks for playing, Ted / Jerry / Mike / Kevin.  Next up, Tim / Terry / Brian / Tom, for at least one more week.  Albert’s gotta be feeling guardedly optimistic.