Looking out on the snow-capped tundra of northern Indiana as I rode the South Shore train this past week - we got 10" in Valpo on Monday/Tuesday – I felt like someone out of Dr. Zhivago, leading to this revelation: WWOD - What Would Omar (Sharif) Do if he were coach... (And he may be a viable option after this week’s debacle).

Given his Russian home state, one would have to believe he'd be dedicated to the run. And a stout defense is a no brainer, bringing new meaning to the expression “Steel Curtain”. And God knows they’d play better in the cold than our present offering.

Re the actual game, I have very little to say. Same as it ever was. Actually, collective regression. 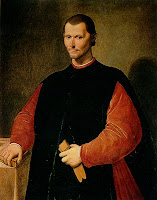 Macchiavelli. In honor of Sully, who bought an Italian company a few days ago, this week's literary reference will be the 15th Century writer, Niccolo Machiavelli... unlike oft-referenced Sun Tzu (and his treatise, 'The Art of War'), Machiavelli's "The Prince" is arguably the seminal business management how-to book. Granted, his name is synonomous with deception, cunning and unscrupulousness. So what? So I’m thinking we ought to be looking his way for coaching guidance… no one ever worked for a tougher boss than he (The Medici’s) and The Prince inspired a number of legendary firebrands… Mussolini, Hitler, Lenin, Stalin.

“Keep your friends close and your enemies closer”… “When assuming the crown, kill the ruler and all his family…”  If those imperatives aren’t inspirational – who would ever blow a 1st half lead after that half time speech?

“Integrity is what you do when no one's around”.  In the news this week… golfer JP Hayes, comfortably in position to earn his '09 card in the Q-school tourney, used an out-of-spec Titleist for one shot (a par 3)... no one even knew! But he realized it later that evening and reported himself. Immediate disqualification. One can only hope this fellow gets a ton of the discretionary invitations next season.

Stay classy, Joe.  Up 55-10 late in the 4th Quarter yesterday and facing a 4th and 1 on Indiana’s 20 yard line, Purdue goes for it. They get it and ultimately score to lay 62 on the Hoosiers. I know it’s your last game Coach Tiller but What The Fuck?!  Were you giving 50 pts with Vegas? If somehow your Wyoming retirement home burns to ground, consider it Hoosier karma.

The Pack 37, Da Bears 3. Proving that while God cannot be negotiated with, He is, apparently, susceptible to lobbying.  Listening to Chicago sports talk radio implode while on my drives up and back to Wisconsin last week, I was as giddy as a little school girl, revealing - it occurred to me - far deeper character flaws than even I realized I had.  That all said, since You’ve given me this latest cross to bear, Lord, how about throwing me another bone against the Saints on Monday night? (Sorry, Pete.) The way I see it, Drew Brees got to revel in his alma mater’s thrashing of Indiana 62-10 so Pack vs. Saints should be Terry’s party.

The Future of the Program.  Weis must return next year. Why?

Next week. Probably going to be my last blog for the season – writing the same thing over and over is getting old, wouldn’t you agree? Plus I’m planning to aggressively explore eggnog-induced dementia over the Christmas holidays and almost certainly won’t be able to string full, coherent sentences.  But I’ll be going out in a blaze of glory!  If the USC game goes as planned, I’ll be writing about a game that I didn’t actually watch too much of (!) and exploring such provocative, thematic topics as Nietzsche, nihilism and the existential concept of ‘nothingness’ as applied to ND football.

Happy Thanksgiving everyone! Don’t forget to cheer on our women’s soccer team, the hoopsters in the Maui tournament and a hockey team that is now a solid top 5 program that can beat anyone.
Posted by Crash801 at 7:35 PM