First off, welcome back everyone!  Let’s hope you’ve all had productive, interesting ‘off seasons’ and are ready to engage in the only sports season that really matters.

Suffice it to say, I’m back. Now’s the time to adjust your email’s spam filters…

Let’s take Mr. Wizard’s Way Back Machine to December ’09 when the rumors were fast ‘n furious as to who was going to be the new football coach. A lot of names. Many of whom were considered ‘elite’ names.  Much excitement in the Kingdom. Then the announcement,  Brian Kelly.  And the sound you almost immediately began to hear was the wind going out of ND Nation’s sails.  (For the sake of posterity, my records seem to indicate that Messrs. Cincotta & Flaherty nailed that particular prediction.)  After my quietly mocking them for the lack of imagination their prediction showed, the next thing that came to mind was Shakespeare.

Rather, his much regarded play, “Much Ado About Nothing” and how that seemed to perfectly sum the whole search experience.  I’d heard Kelly’s name attached to the job in early November (that would’ve been after the Navy loss). Hell, we all heard it a year ago!  Seemed too obvious.  And ultimately, perhaps too pedestrian. I mean, a resume built on Grand Valley State and U of Cincinnati?
Much Ado About Nothing.

But ah the irony!  Shakespeare, as do all Brits, loved irony.  In retrospect (to me, at least), Much Ado About Nothing was far more a commentary on how we all got it wrong – all the weeping, wailing and gnashing of teeth over the job being too big for Kelly.  Ironic because I don’t think there’s a metric, so far, that one could say he’s fallen short on:

But back to Will. 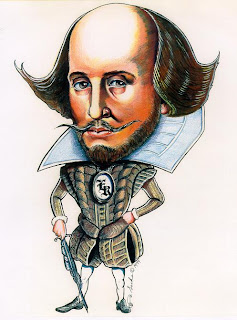 As Fate would have it, I also got a book on Shakespeare for Christmas… a delightful, easy read by Bill Bryson… big type, lots of pictures… in many ways, perfect for Accounting majors.  It turns out, for a guy that is arguably in everyone’s conversation for Greatest Writer Ever, there’s fuck all really known about him.  Did you know that there isn’t a single verifiable portrait of him while he was alive?  (Talk about International Man of Mystery. Austin Powers, eat your heart out.)  And whole decades of his life where there is zilch known… sure he grew up in Stratford-On-Avon but how’d he get down to London?  Where’d he get the fancy pants education?  His dad was nothing special from a commercial standpoint. How’d he know so much about Italy and the wide variety of professions he incorporated into his plays?

Beats the hell out of, well, pretty much everyone. 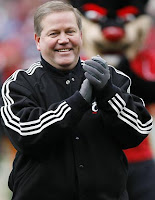 And so it appeared Kelly, with his Div-II or III background, got much of the same treatment as Shakespeare – what did we really know about him? He grew up in the New England sticks… dabbled in politics… impressive coaching record but on a small stage… What’ll he be like when he comes down to The Big City and has to compete with true sophisticates?  Coaches who like Prince and Madonna, require only one name to be known:  Urban, Pete, Nick.

And yet it seemed to work out okay for Big Will.  Let’s hope it does for Little Brian.

Tool of the Week.

Much like the dutiful artisan who painstakingly etches that golfer’s name on the trophy as he’s walking triumphantly up the 18th  fairway, this award has had Lane Kiffin’s name pretty much carved in stone from the day he fucked over was announced as USC’s new coach.  But current events being what they are, this Off Season’s award has to go to LeBron James,  a guy who took a seemingly simple (and relatively straightforward) decision… one that at its most basic level (i.e. wishing to play w friends, for less money, in order to improve his chances to win big) a great many people could’ve empathized with.  Instead he turned it one of the most self-absorbed cluster fucks in history (and considering the state of professional athletics, that’s saying a lot) -  probably knocking tens of millions off the net worth of his Brand.  AND, perhaps most impressively, made Kobe Bryant appealing in comparison.  Yowzer. 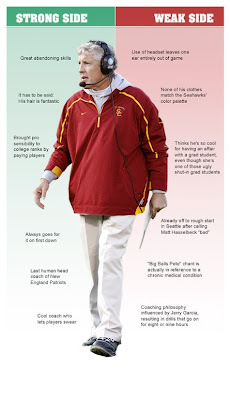 Oh and special shout out to Pete Carroll for his smarmy attitude post-NCAA sanctions. Are you not possibly The Most Gutless Human on the Planet*?  That’s a rhetorical question, Pete. Of course you are.  Take responsibility for your actions just once, Pete, please? Of course you won’t.

Schadenfreude Winner.
This could be a lifetime Achievement Award so drum roll please… USC’s football program!  Systemically unethical and unapologetic – rock me, Amadeus!

Never have so many deserved so much while taking responsibility for so little.  Happily, the future doesn’t really look all that groovy… back up players are transferring every week so you better pray for an injury-free season. And don’t look now, Lane, but there’s at least four Pac-10 coaches who will run rings around you as a strategist and leader.  After they’ve step on your throat.  Which they will.

I'm sure they won’t be horrible but who cares? Perhaps LA will redouble its efforts to recruit a real professional football team.

Apropos of Nothing ‘though Loosely Tied to The USC Riff.
It follows that between the 16 years of catholic education and watching Mike Garrett ‘do that voodoo that he do so well’, I’ve developed an acute – borderline unnatural – interest in Evil.  So what, you say? So there’s this small town in Wales, not so far over the border called Hay-on-Wye and known as the Town of Books.  It has approximately 1900 inhabitants and over 30 bookstores.  (As a collective, their SAT Verbal scores are off the charts!) Okay I made that up.  But a few years back, while launching my wife and daughter off on a three day, cross country horseback ride from this town, I stumbled on a coffee table book about the 100 Most Infamous Evil Despots & Dictators in history.  Like any Hall of Fame, I suspect the voters tend to favor those with the most recent pedigrees  but there’s some very impressive old timers that I’d encourage any of you to read up on – for the purposes of a compare / contrast discussion on USC (or SEC) business practices:

Killing family members and switching political sides a few times is merely the table stakes for this group; let me say this – there are countless others who deserved to be on this list. Feel free to email me with your nominations for famous evil shitheads.


1.  Philosophy.  The theory that only the self exists, or can be proved to exist.
2.  Extreme preoccupation with and indulgence of one's feelings, desores, etc.; egoistic self-absorption.

Rumored to be the basis of an art form started in the early 21st Century by Brett Favre but most recently refined into a Scientology-like pseudo-religion by Dwayne Wade, Chris Bosh and LeBron James.

Oops, Perhaps I Should Re-Think My Position.
There’s a terrific early scene in Ron Howard’s re-make of ‘The Grinch’ where the protagonist, after wrapping Cindy-Lou Who up from head-to-toe in Christmas paper (and jettisoning her down an industrial mail chute), turns to the camera and says, “Nice kid. Baaaaaad judge of character.”  And so it might also be said about me ‘n my man crush with Butch Davis.  (As Sully will attest, he was my fave for the ND job.) As fact emerge of the latest NFL-agent inducted scandal in the college football ranks, my boy Butch’s program is looking like it too was a little fuzzy on the whole compliance thing. And frankly, Chapel Hill shouldn’t represent quite the daunting challenge to stay on top of your players as  Los Angeles.  Butch, you disappoint me.  But as Kay Corrigan has said to me too many times, “But for the grace of God, there go I.”  And in this case, “I” might be one Marvin Austin (and Greg Little) who I believe we desperately wanted… Little was the one who stiffed us on Signing Day, yes?  Yikes.

As alluded to earlier, one of the prevailing questions about The New Regime was whether they had the chops to go against the elite programs for The Difference Makers.  Only one coach was retained from Weis’ staff, albeit a damn good one (and easily Charlie’s best recruiter), Tony Alford. But what to make of these other yahoos who seemed to be distressingly comfortable chasing the 2 and 3      athletes. Well, 12 – and looking like maybe 14 – commits into this year, this angst would seemingly be… everyone say it with me… Much Ado About Nothing.  Kelly and his coaches (who, across the board, are far more aggressive recruiters than the Weis staff) are in the mix with a more than respectable number of the top kids. He’s doing everything he can possibly do at this point except for one (and most important) thing – win a lot. And that starts September 4th against Purdue.

Which leads to what this email is all about – this year’s wager.  But first… 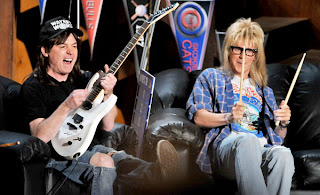 For anyone not yet aware, if you're anywhere in the Chicago vicinity between Sept. 8-11th consider putting this on your dance card:


ü  Paul is telling me to go with 9 wins. And so I shall.
* I received a C-  grade for this photograph, due to what the prof called the disturbingly phallic nature of the effort.
* Don’t laugh, the oracle Paul, here shown picking Spain to win in the finals, went 8-for-8 in predictions.

Song of the Week.
Going back to 2000, a way cool duet between Mark Knopfler and Van (the Man) Morrison, “The Last Laugh” (http://www.youtube.com/watch?v=eBAYyabeHnw&feature=fvwrel).

The kind of song you can play to your children and say, ”talk to me when your guitar heroes start making music like this.”

“They had you crying but you came up smiling.
They had crawling and you came up flying...

And don’t you love the sound of the last laugh going down?”

Nobility meets vengeance. My kind of sentiment.  And what I’ll be playing as ND gets its act together while the rest of the football elite implodes amidst hubris and scandal.  This may be the last time I can be optimistic about this program w/o empirical data, but I am. And I’m thinking payback is coming sooner than many think.  At least that’s my story this week.