Okay so that may be a bit of an overreaction – but with every passing week it becomes crystal clear that the Notre Dame football program, 2010 Edition, is a) not real good and b) not terribly close to being real good. The Stanford effort (or lack thereof) was disappointing on so many, many levels. But it’s always risky to draw any long term proclamations so soon into a new regime - no matter how distressing the early returns are.  My strong recommendation: re-set your expectations for this year on ‘minimal’ with a hope for showing some consistent improvement over the course of the year.

And while you're doing that, ask yourself how good wasStanford  in Harbaugh’s Year One?  Pete Carroll’s Year One.  Joe Paterno’s Year One (okay we don’t actually know this since the original papyrus on which it was recorded got unwittingly sealed in the tomb of Ramses II at Abu Simbel).  Fun fact: the assistant coach responsible for that oversight was immediately sacked and it was the last time Joe ever replaced anyone on his staff. (Thank God for formaldehyde.)

Word of the Week.
En•nui
noun \ˌän-ˈwē\   a feeling of weariness and dissatisfaction: BOREDOM

Example:  …the kind of ennui that comes from having too much time on one's hands and too little will to find something productive to do (see Corrigan, Terry).

(Special recognition must go out to Mr. Rasmus for suggesting this word – bullseye!  Thank you, Bob. Could there be a better word to capture the feelings of watching one of the worse – and dullest – games in recent memory?)

What has also become clear is that this year has been spectacular for pre (and post) game entertainment.

This week’s highlight took the form of a latter day version of The Big Chill. (I think I was the Jeff Goldblum character.)  You all remember that slice of ‘80s culture:  a group of close university friends gather together when one of their mates, the charismatic Alex, suddenly offs himself, leaving the close knit group to essentially wonder, What The Hell?!  Spoiler alert if you're one of the six people over 50 who never saw the movie: the gang never do figure out the enigma that was their pal.  But they do eat, drink, dance, smoke dope, play Motown music and reminisce enough to make the otherwise macabre occasion a fantastic re-bonding opportunity. Woo hoo!! Tragic Alex, he shan’t have died in vain!!

Fast forward to Friday night in SW Michigan with the Ward-Gordon-Lohn-Langhenry-Maher-Richmond-Borkowski gang where pretty much the same script played out.  (Only this time, unbeknownst to us, The Role of Alex-The-Corpse Was To Be Played By The Notre Dame Football Team.)  It too was a rocking great time – fantastic pasta and so much wine (including the small warehouse that Gordo brought and the 2nd bottle of Marcel’s “Tom Feifar” super Tuscan) that by evening’s end, I think I actually joined a local militia.

No doubt an unfortunate coincidence that the aforementioned stiff was named Alex because when I began to watch a tape of the NBC telecast, I couldn’t help but think of another Alex, the protagonist in Stanley Kubrick’s (and author Anthony Burgess’s) iconic “A Clockwork Orange”.  A sociopathic reprobate who enjoys raping and maiming in a dystopian world – while listening to Ludwig van’s 9th Symphony no less – Alex ultimately has his behavior modified through a government program that forces him to watch violent visuals which make him physically ill.  Only now do I fully understand the power of that final sequence.

Observations from The Tailgater(s).
•           Pictures really do say a 1000 words.
Observations from The Game.
After watching Jeff Samardzija walk like a dozen guys in an 8-7 loss on Sunday, I realized that many of the axioms of sport are thus because they're actually true!  Imagine that.  Like if you walk a bunch of guys in baseball, you're usually going to pay for it, Jeff.  And in football, especially ND football, it’s:

         It’s all about the play of the two lines. And both of ours were dominated. To be somewhat fair, the Stanford O-line, which had its way with us, is very experienced and the strength of their unit.

         QB is the most important guy on offense.  We go as Dayne goes, unfortunately.  And right now, that is not good news.  And while there is much justifiable trepidation about whether he is, in fact, The Answer, try and remember what you thought about Quinn or Clausen in Years I & II.  It definitely wasn’t that they were the 2nd Coming of Joe Montana.

         Coaching matters. Play calling, especially on the crucial 3rd (or as the case may be, 4th) downs was, at best, curious. At worst, critical plays look like they’re being called by Bullwinkle J. Moose who used to famously attempt scatterbrain tricks and say, “Nothing up my sleeve – presto!”  Sadly, there really wasn’t anything up ole Bullwinkle’s sleeve..

Theory: maybe Kelly hasn’t yet figured out that this team’s ability to execute isn’t yet as proficient as he’s had in his recent past. In any event, Kelly’s aggressiveness has cost us some important points.

Talent matters too. One man’s opinion: we have three good-to-very-good players on Defense (Ian Williams, Teo and Gary Gray) – everyone else are just… guys.
•           As an aside, did Manti make every play – or did it just seem that way?

Song of the Week.
Roger Waters played several shows this week at The United Stadium, focused totally on the “The Wall”.  Apparently it was killer but at $250 / pop, my jones for a Pink Floyd experience waned, metaphorically speaking.  But with a nod to one of rock’s great icons as well as the game, this week’s offering must be “Comfortably Numb”.  Ostensibly about the thrill of a heroin rush, one could say that being a Notre Dame football fan these days is equally coma inducing and self destructive.

Tool of the Week.
1.  Braylon Edwards.  Your team pays for a car service that’ll pick you up anytime anywhere, anonymously… you blow a .17 on the breathalyzer (2x the limit for those counting) and you still decide to drive home?  Later, you tell the media that you don’t understand what’s BFD…  Knucklehead, Thy Name Is Braylon.
2.  Jim Harbaugh.  Going for 2pts when you're up 26-6 with 8  minutes left against an opponent who didn’t look like they could score against a strong wind?  Hmmm. No one has made any kind of issue about it but it certainly got my attention.  Hopefully, Jim, you were just practicing for rubbing it in vs. USC.  Again.

Schadenfreude Winner of the Week.
>  Lusted for ‘Bama, really hoped for Penn State, settled for Texas.

Recruiting Buzz.
Interesting blurb on NBC Sports / Notre Dame web page about the recruiting battles going on between the two smarty pants schools (Stanford and ND) who compete over those rarest of birds, great athletes that seem to actually be reasonably good students.  Check it out:

The Wager.
Matt, Jerry and Ted, thanks for playing. Now take a seat.  Like lambs to the slaughter, next up for extinction are Corrigan-Rasmus-Feifar-Thompson-Behrens.   And it’s looking like nobody winning could be a distinct possibility.

So we need to discuss a 2nd wager – someone’s gotta win this thing!

Here’s a proposition:   what if, up to the Pitt game kickoff, one were given the option to buy (for another $25) the chance to flip your wager?  That is to say, an original 8-4 prediction can become a 4-8 bet. The 10-2 guys can stand pat or if they’re genuinely despondent, could flip to a 2-10 guess.

It expands the pool and gives most, maybe not all , the chance at a realistic recalibration.  And the Albertville folk who predicted well, aren’t necessarily penalized…

If not, other ideas certainly welcome… 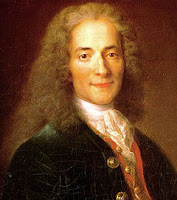 The 18th century French satirist Voltaire once said, “If God did not exist, it would be necessary to invent him." Misinterpreted at the time as a frighteningly cynical thought of the highest order – he was actually railing against atheists – the witty Frenchman was widely castigated.  But in my convoluted logic, I find this thought to be an optimistic one.  And relevant. Putting aside the basis of the thought, the fact is everyone needs something to be hopeful about and for some (many?) it could be the concept of a benevolent Higher Being.  For the Notre Dame football fan, it’s…  I actually don’t know what it is… but just maybe it’s the idea of something Bigger & Better being only a little further down the road.  One can’t give up, can’t stop thinking they won’t ultimately turn it around.

Then again, I could be totally full of hooey.

I do seem to recall that in ‘The Usual Suspects” a mirror opposite statement (‘the greatest trick the Devil ever pulled was convincing the world he didn't exist’) was also uttered. So maybe we’re just screwed. Maybe the cards are stacked against the program… a tough schedule w the patsies not coming until the season’s already in the toilet, academic restrictions that keep us from getting a sufficient number of the really bound-for-the-NFL studs, coaches that are overhyped...

But if that were the case, what would we tailgate for?

A lone, dull-witted, vigilant sentry waits for the Return of The Program… but when?!