Both of my daughters tell me we’ve hit the Dog Days of the semester… still a couple weeks away from Thanksgiving and three weeks after that to Christmas vacation… academic fatigue is setting in as their attention spans begin to waver. And as I watched the game today, I must admit my focus was not complete either. I began to think about William Blake, the Romantic era poet-artist-visionary.

Unappreciated at the time – most of his peers thought he was a loon – he’s now recognized as one the most important cultural contributors of 18th Century England.  (As an aside, I happen to think a similar Fate awaits Castellini.)  The point is, I like his work a great deal. It’s on permanent display at the Tate Museum in London and if you’re ever in town with some time to spare I’d recommend you head on over – I can safely say it’s a significantly more enjoyable three hours than ND Football 2008.

But rather than dissolve in a rant on yet another desultory performance, let’s start with an obvious positive: for 58 minutes, this was the most impressive defensive showing vs. Navy’s weird see-it-once-a-year-offense in at least 10 years. I thought we legitimately dominated. Frankly I was not that surprised – we’re a faster, lighter team (attributes that hurt us against more traditionally built teams) and they played with really nice energy. The D deserves some kudo’s…

I hate playing Navy.  They’re impossible to hate. Or even dislike. These guys are tough, disciplined. They’re almost always fundamentally sound. They play with virtually zero of the bullshit histrionics you see from every other program (including our own).  And oh yeah, they’re defending our country. The point is I take no pleasure from beating them and my guess is that ND feels the same. But hopefully this game represents an epiphany for Charlie – charity belongs outside the playing field. Forget Gray’s fumble - we did nothing but run the entire time late in the game and it was my perception that we clearly had our foot off the gas. I’m sure the weather will be held as a contributing factor but the play calling – his play calling – those last minutes was utterly predictable. And let me submit this:  if our players let up, could it be that they might have taken their cue from the coaches?

On-side kicks. Say what you will about our lack of special team preparedness, but that 2nd on-sides kick was bitchin’. Perfectly struck and executed, right down to the Navy player taking out our guy so their player could catch it.

Bruton.  He had his hands – twice – on very catchable balls. The good news is that he’s always around the ball. But I can’t help but think doubts about his hands are going to cost him some money next April.

O-line.  This game proved nothing. Coach Latina, I wouldn’t be buying many green bananas.

Swarbick.  Welcome to the national microscope.

Myron Rolle. Florida State has had a bad week – 5 WR’s suspended for a fight where a chair was thrown out a window and hit a woman (ouch). But their star safety is doing something we’d be falling all ourselves in vicarious school-related self-congratulation… the kid is interviewing next Saturday for a Rhodes Scholarship – he’s a 3.75 pre-med major and may I say, more articulate than any of us. And he’s putting the interview ahead of their game w. Maryland. A game that has conference / bowl implications for them. Bravo, Myron – and good luck.

Herbie and the ESPN guys.  I saw their discussion on ND and I have to say, I thought it was utterly fair. Herbstreit in particular. He’s been one of the program’s (and Weis) biggest supporters and you could tell his disillusionment. He said, quite accurately, this is a 7-win program over the past 15 years. Why expect anything more out of ‘em? This is the reality until we prove otherwise.

‘There are other ND sports, ya know’.  Hockey is on the verge of sweeping Lake Superior this weekend, #1 ranked Women’s Soccer won their 1st Round NCAA tournament game and the Men’s B-ball team tip off on Sunday – I suggest we all practice portfolio management.

Glimmer o’ Hope (against nationwide humiliation). USC and Stanford are tied at the half, 17-17.

Schadenfreude Poster Child. This week’s winner, a seven time nominee and previous three time winner (at least) is of course, Meechagan!  Staring at the worst record in their history, Wolverine Nation is distraught. And they should be. Ain’t it great?

Negotiating with God.  Lord, as a Packer fan, I really need this game against the Bears tomorrow. I know there’s a ton of Chicago fans that are probably better Catholics than I, but… so what. How about throwing this poor sinner a bone?

Music. Someone – Mr Wills, I believe – brought up thematic songs a week ago. I’d like to offer one – from a band called Soul Asylum, circa mid-‘90s. The song was called appropriately, “Misery”:-- Ryan & Shea used to love pogo-ing around our kitchen in Richmond, England… wee lasses buzzed out their minds after breakfast on maple syrup-drenched pancakes. (Those were good times.). A sampling of the lyrics: 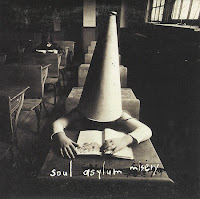 They say misery loves company.
We could start a company – and make misery:
‘Frustrated Incorporated’…