First of all, apologies for being late with this week's missive... I'm not going to drink wine at a tailgater ever again. Then again it might have been the three Guinesses-as-nightcaps with Sully... not going to do that either, at least until next week, with Ungie & Lindon. At any rate, my usual Sunday muses failed to arrive and voila! no Sunday afternoon epistle.

But here I am and Saturday's what-would-you-call-it-anyway left me feeling like I'd seen that movie before; especially the day after'smixture of disappointment and optimism.  Oh Oracle of Delphi, have we turned a corner? And if so, where are we? Easy Street or The Blvd. of Broken Dreams? How many more we-lost-the-game-but-seemingly-won-the-recruiting-weekend pronouncements are we going to have to go through? Probably not many - but more on that later.  And so, two discordant cultural references came immediately to mind for me - neither remotely similar. 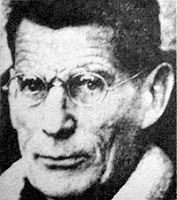 The first, painfully obvious one, was Samuel Beckett's existential masterpiece, "Waiting For Godot"... described as the most significant English language play of the 20th Century, who here has seen it? Read it?

Someone other other than Perez this time?!

I'll explain it in simple terms: two Notre Dame alum, Vladimir & Estragon, wait for the better part of two days for their colleague -we'll call him Ungie - no actually Godot, to arrive.  He never shows. So the two talk - a lot - to kill the time. A couple other guys show up, not Godot -  we'll call them Biv and Zip, no actually Pozzo and Lucky. They tell V & E that Godot is not coming, at least not today. The two protagonists are not happy about this to the point of even contemplating suicide but are too lazy to do so. They're even too lazy to leave where they're at. The End.

I think you can see the obvious parallels to Notre Dame Football fandom. Waiting and waiting for something that may never be coming.

Frankly, I'm getting tired of waiting. For me, the very notion of the 'good' (read acceptable) loss ends with this past weekend. The Biggest Game of the Year is now the next game. Every next game. 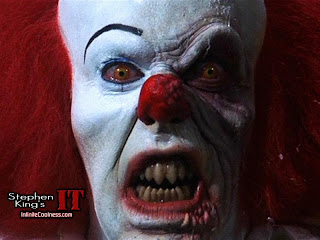 The second, perhaps more accessible, cultural referenceapplies to the concept of "It".  Not Stephen King's "It", apparently by the way a pretty good book - I never read it - but an impressively cheesy made-for-TV movie that starred John Boy from the Waltons and Three Company's John Ritter. The star for me, however, was Tim Curry as the prototypical Creepy Clown, who was either satanic or an alien (who can remember?) that torments a group of New England kids, kills a few of 'em, goes away for a bunch of years then comes back to torment them when they're older.  Kind of like Beckett except for an impatient Gen Y audience.
Of course, Mr. Curry playing a satanic outer space antagonist is no stretch for those of you who consider themselves afficionados of cult filmdom.

Let's do the Time Warp again.

And let's face it, with this football team... who among us hasn't yearned for a handy time warp to, say, circa 1988?

In this particular case, the "it" I'm pondering isthat ineffable quality which separates the special from the pedestrian. Where Smart meets Lucky... where Success not only walks next to you, it holds the door open for you... it even carries an umbrella for you lest you get caught out in a rainstorm...  When you have It, your possession WR who's having a career day, doesn't get hurt before your three final plays. If you have It, your replacement WR doesn't slip on the final play of the game as a perfect pass goes whistling by you.

Urban has It. Saban absolutely has It. I think Stoops does too. Pete found It once he left the NFL behind (and if he's smart, he'll realize that he only possesses It in College Football-land).

Sadly, Charlie doesn't have It. And after five years of trying, I think its safe to say the odds are relatively low of him acquiring It.  Bummer for all of us.  My question is 'can he still be successful? I actually still hold out hope... I don't think Mack Brown has It either - he actually might have something better, Texas state HS football. The point being that talent can cure a lot of ills and Charlie can be the harder working, Mack Brown of the north.

Then again, maybe not.

So in my usual rapid fire,stream of conscience-like way, here's what I saw:
Schadenfruede winner of the week: Ohio State, come on down!  And Terrelle Pryor, hey, weren't you supposed to be The Next Big Thing?  And yet, you aren't.

And finally, once again, a huge thank you to the A Lot Tailgating Armada - that was the largestfestival I can ever remember and everything was spectacular. Onward and upward!
Posted by Crash801 at 3:45 PM